10 largest cargo planes in the world by maximum capacity

Add “larger" to the “Faster, higher, stronger" motto of the International Olympic games and you get a brief history of air transport. Here we list the amazing capacities of the world's largest cargo planes to see there are truly no limits to engineers. 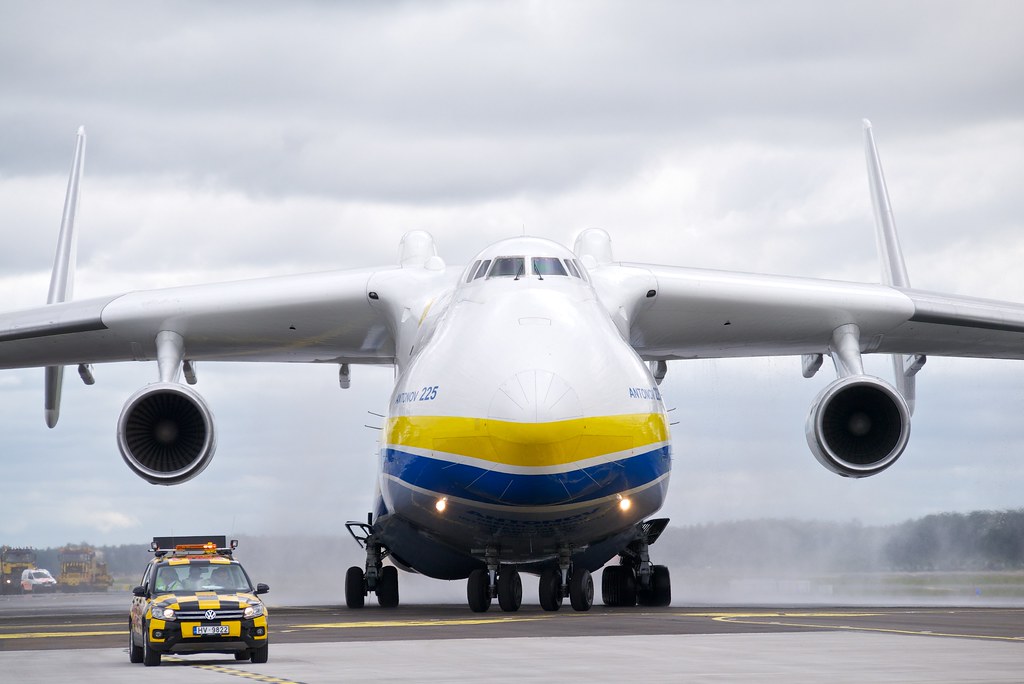 Some of the largest cargo planes in the world can carry multiple helicopters, a space shuttle or enough face masks to a supply a whole country. While one might suppose that these giants have been developed and built in recent times, they would be wrong. The largest cargo planes were actually made during the cold war and some of them are still in operation.

The Antonov An-225 Mriya holds the world record for the largest single-item payload at 418,834 pounds, as well as the record for total airlifted payload—559,577 pounds, or 280 tonnes. Not only can it transport heavy cargo, but also exceptionally large loads. No wonder why; it was originally designed to take the Soviet Buran space shuttle back from its landing site to the Baikonur spaceport in Kazakhstan. During a test flight in 1983, the Antonov set 106 world records related to weight, distance and altitude.

The Antonov An-225 Mriya is a strategic airlift cargo aircraft that was designed by the Antonov Design Bureau in the Ukrainian SSR within the Soviet Union during the 1980s. It is the only aircraft in the world powered by six turbofan engines and is the heaviest aircraft ever built, with a maximum takeoff weight of 640 tonnes (705 short tons; 1,410×103 lb).

It also has the largest wingspan of any aircraft in operational service. 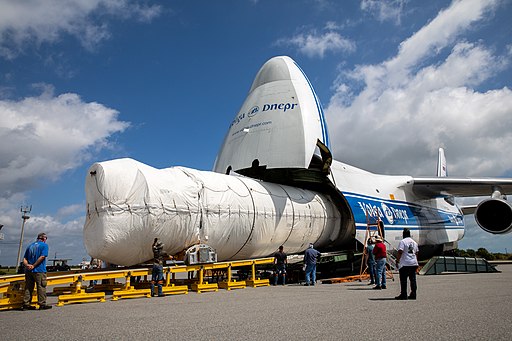 If you were taken aback by the fact the world’s largest cargo plane was built in 1970’s, you might be even more surprised to learn that the second largest plane was built during the same period. It was designed for long-range delivery and air dropping of heavy and large size cargo, including machines, equipment and troops. It is capable of carrying not just regular but also oversized cargo too.

The Condor wasn’t a one-off plane that was built like the Mriya; around 60 were made and many of these are still in operation. 20 An-124-100 of Antonov Airlines, Volga-Dnepr, Poliot and other airlines transport different cargo all over the world. Their loads are rarely conventional; they have transported 90t hydraulic turbines, large Liebherr autocranes, American Euclid dump trucks, the fuselage of Tu-204 passenger transporter, a 109t railway locomotive, and even sea yacht more than 25m long. 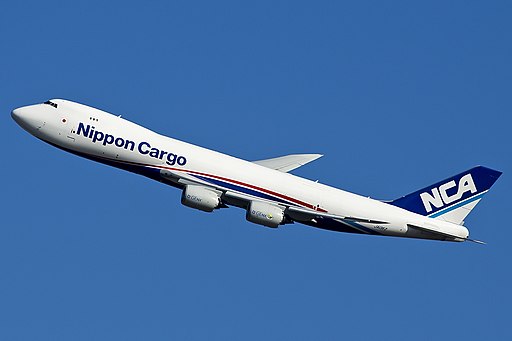 The Boeing 747-8 is a wide-body airliner developed by Boeing Commercial Airplanes, the largest variant of the 747.

The first 747-8F Freighter performed its maiden flight on February 8, 2010, and the passenger 747-8I Intercontinental followed suit on March 20, 2011. The cargo version was first delivered in October 2011 and the airliner began commercial service in June 2012. 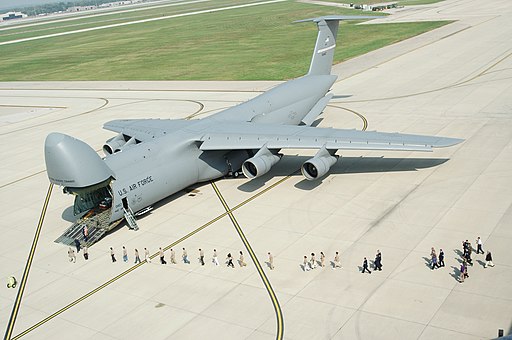 Slightly smaller than the Antonov Condor, Lockheed’s C-5 Galaxy is the largest aircraft routinely operated by the U.S. military. With a payload capacity of almost 240,000 pounds, the Lockheed Galaxy is capable of transporting 5 helicopters!

It isn’t a young aircraft either; the first of these huge planes was delivered in 1970, however, they underwent a significant modernization program in the 2010s, so the machines still in operation are different to the original ones.

The C-5M Super Galaxy is equipped with five sets of landing gear, 28 wheels, four General Electric CF6-80C2-L1F (F-138) commercial engines, and a „state-of-the-art” maintenance diagnostics system, according to the US Air Force.

It can carry oversized cargo over intercontinental ranges and can take off and land on relatively short runways. Both the nose and aft doors open, allowing ground crews to simultaneously load and off-load cargo from both ends, reducing cargo transfer times. The full-width drive-on ramps at each end enable double rows of vehicles to be transported. 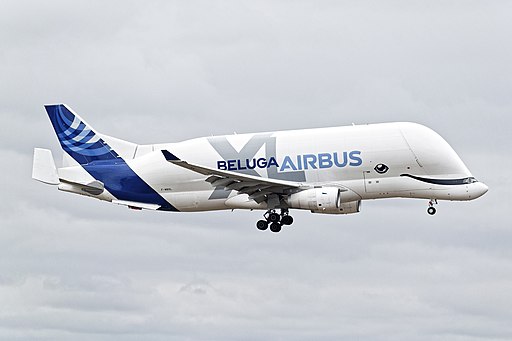 This aircraft is not an oldie; the first Beluga XL started operation in 2020, and the fourth giant took off as recently as July 2021.

The Airbus BelugaXL (A330-743L) is a large transport aircraft based on the Airbus A330-200 Freighter airliner, built by Airbus to replace the original Airbus Beluga in the movement of oversized aircraft components like wings.

At 63 metres long and 8 metres wide, the BelugaXL has the largest cargo bay cross-section of all existing cargo aircraft worldwide.  The BelugaXL can carry two A350 XWB wings compared to the Beluga ST, which can only carry one. With a maximum payload of 51 tonnes, the BelugaXL has a range of 4,000 km. (2 200nm).

The BelugaXL is based on an A330-200 Freighter, enabling the re-use of existing components and equipment, and is powered by Rolls-Royce Trent 700 engines. The lowered cockpit, the cargo bay structure and the rear-end and tail were newly developed jointly with partners, giving the aircraft its distinctive look.

The aircraft made its first flight on 19 July 2018, and received its type certification on 13 November 2019. The BelugaXL entered service with Airbus Transport on 9 January 2020. 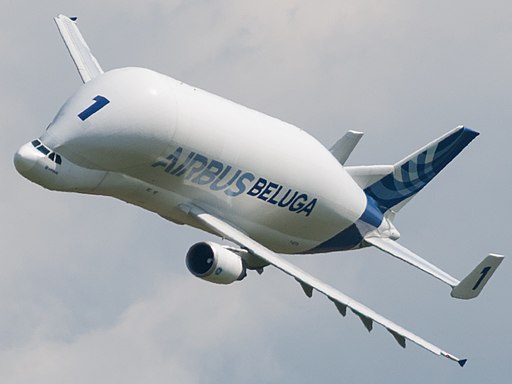 The Airbus Beluga was introduced in 1995 to replace the older Super Guppy. It is a version of the standard A300-600 wide-body airliner modified to carry aircraft parts and outsize cargo.

The BelugaST’s maiden flight took place in September 1994 and was awarded certification from the airworthiness authority in October 1995.

Five Belugas currently in operation are Airbus A300-600 jets that have been modified to carry large cargo. The top section of the aircraft was cut and an additional, wider fuselage section – resembling a bubble – was added to the airframe, giving it its characteristic hump.

Its cockpit was lowered, making it possible for the cargo hold to be loaded and unloaded through the front of the aircraft. The result was a spacious cargo hold of 1,400 cubic metres, equivalent to 671 people, 36 cars or seven elephants. 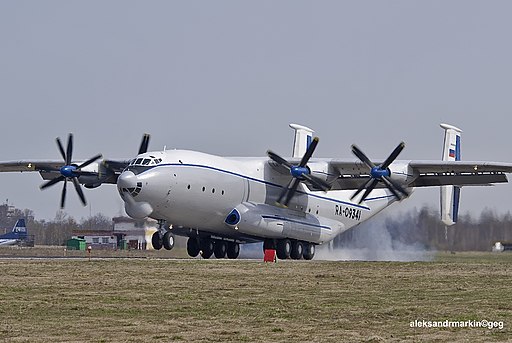 The AN-22 was serially built at the Tashkent Aviation Plant in Uzbekistan. A total of 66 aeroplanes were manufactured from 1965 to 1976. Since 1980, Antei has been transporting of oversized components for the construction of the AN-124 Ruslan and AN-225 Mriya.

This giant plane belongs to the oldies, as it was made its maiden flight in 1965, but one single aircraft from  1966 is still in service. 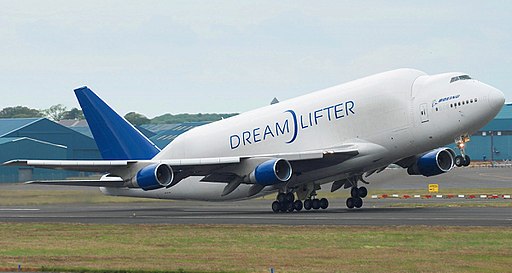 Some of the biggest cargo planes in the world are variations of the Boeing 747. The 747-8 Freighter, a cargo version of the passenger 747-8 Intercontinental, is actually a heavier plane—with an almost 900,000-pound maximum takeoff weight. But the Dreamlifter’s fuselage design allows the plane to carry particularly large or awkwardly shaped items.

The Boeing 747-400 Large Cargo Freighter (LCF), is a wide-body cargo aircraft modified extensively from the Boeing 747-400 airliner. With a volume of 65,000 cubic feet (1,840 m³), it can hold three times that of a 747-400F freighter. The outsized aircraft was designed to transport Boeing 787 Dreamliner parts between Italy, Japan, and the U.S., but has also flown medical supplies across the world during the COVID-19 pandemic.

The Dreamlifter could be considered pretty young compared to the formerly mentioned Antonovs, as it took its maiden flight in 2006. 4 such aeroplanes have been built – however, to be more accurate, these are all conversions.

The C-17 Globemaster serves as the U.S. Air Force’s primary strategic lift aircraft for global transport of troops and equipment. The C-17 is capable of rapid strategic delivery of troops and all types of cargo to main operating bases or directly to forward bases in the deployment area.

The Boeing C-17 Globemaster III’s first flight was in September 1991 and 279 of these beasts were built between 1991 and 2015. The C-17 was designed to replace the Lockheed C-141 Starlifter, and also fulfil some of the duties of the Lockheed C-5 Galaxy.

It can transport 100,000lb (45,360kg) of freight more than 4,500nm (8,334km) while flying at altitudes above 35,000ft.  The aircraft’s design enables high-angle, steep approaches at relatively slow speeds, allowing it to operate into small, austere airfields and onto runways as short as 3,500ft long and just 90ft wide.

The transport is in service with the U.S. Air Force along with air arms of India, the United Kingdom, Australia, Canada, Qatar, the United Arab Emirates, NATO Heavy Airlift Wing, and Kuwait. 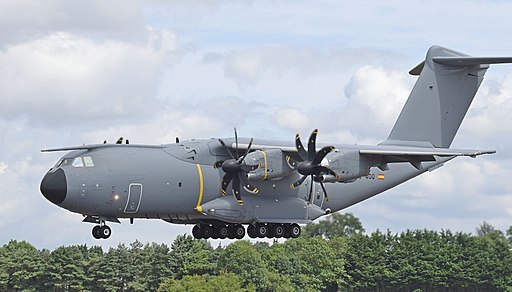 The Airbus A400M Atlas is a European four-engine turboprop military transport aircraft. It was built as an international project and is operated by Germany, France, Spain, the United Kingdom, and Turkey among other European countries.

The aircraft’s first flight was in 2009, and it uses modern composite materials for the fuselage and turboprop engines designed for maximum fuel efficiency and low operating costs.

With a maximum payload of up to 37 tonnes (81,600 lb) and a volume of 340 m3(12,000 ft3), the A400M can carry outsize cargo, including vehicles and helicopters that are too large or too heavy for previous generation tactical airlifters, for example an NH90 or a CH-47 Chinook helicopter or a heavy infantry fighting vehicle for military purposes. It can also carry a heavy logistic truck, a rescue boat or large lifting devices, such as excavators or mobile cranes needed to assist in disaster relief.