The first day of summer is approaching and the temperatures are increasing day by day. On exceptionally hot days, asphalt temperatures range from 40 to 60 degrees Celsius. The tyres become soft and their contact area increases, making them more susceptible to damage.

In addition, the summer period is not only the time of extremely hot weather but also the holiday season, in which traffic is the highest in the year and traffic jams occur more often. ADAC TruckService advises how to prevent accidents and damage to tyres in these difficult conditions.

In the hot weather, drivers should pay special attention to tyres, which during this time wear off faster. They can also tear or ignite while driving.

Therefore, before starting the route, carefully check the tyres for any damage, bulging, scratches, blisters.

ADAC advises that at least every two weeks the driver should check the tyre inflation pressure while the tyre is „cold” (including the spare wheel).

How to behave when a tyre explodes?

If, despite all precautions, the tyre breaks, drivers should keep calm and cool and start braking as soon as possible. It should not be violent. The vehicle should slow down gradually.

In contrast to the rear tyre, often damage to the tyre on the steered axle will be noticed much quicker. The vehicle is then getting slower and slower. If it bears the right, we are dealing with a burst on the right side, if on the left – on the left side. Also in such a situation one should stop as soon as possible (braking gradually) to make an inspection.

What to do when the tyre ignites?

When it comes to tyre ignition, the first principle is „not to threaten human life”. In the case of twin tyres, it is recommended to continue driving with the emergency lights switched on until the burning tyre separates from the rim. You should then keep a safe distance from other vehicles. It is important, however, not to stop abruptly, because then the fire could spread over the entire truck. After the tyre separates, the driver should stop the vehicle on the emergency lane, secure the place of failure, unhook the tractor and set it aside about 20 m further.

In the case of single tyres or those on the front steering axle, it must be considered whether a better solution will be to stop the vehicle or continue to drive at low speed. However, the driver must stop in a situation when the burning tyre is broken or the rim is loose. Otherwise, he may lose control of the vehicle.

The fire in the initial phase can usually be extinguished using a standard six-kilogram powder extinguisher. However, remember to notify the fire brigade as soon as possible, preferably while driving. It is important to provide a detailed description of the vehicle position and cargo information, especially if these are dangerous goods.

Take care of your well-being

According to ADAC experts, the most important thing is to focus on what is happening on the road. This is obvious, but it should be noted that high temperatures and more traffic are an additional burden for the driver. Distraction and fatigue are among the main causes of accidents.

Therefore, according to professionals of the German automobile club, it is worth taking care of the right amount of sleep, and when the first signs of tiredness appear, drivers should stop for a short break.

It is best to eat a snack rich in carbohydrates – in contrast to fats, they have a positive effect on concentration. These can be, for example, fruits. Remember also about the right amount of fluids, preferably 3 liters of water per day should be enough to prevent circulatory problems. However, strongly chilled beverages should be avoided – they only increase sweating.

Another important issue for driving safety is the driver’s environment. ADAC TruckService emphasizes that drivers should not cool the cabin too much. Before you set out on the route you have to let in fresh air, and the difference between the temperature set on the air conditioning and outside should not exceed 6 degrees.

Driving a fuel tanker on fire through the city

The chilling event occurred last summer. If it was not for the driver’s calmness, it could lead to a real tragedy. Jürgen Heim, a 49-year-old driver, was driving a tanker with 25 thousand liters of diesel and 10 thousand liters of gasoline in the Bavarian town of Schrobenhausen, when he saw the fire in the rearview mirror.

The first reflex reaction in this situation is the desire to escape, but the man knew that if he jumps out of the vehicle, it will break down and there will be an explosion in the middle of the city. Since there was no way to leave the vehicle, Heim decided to call for help. He knew that he had to leave the city, so he called the emergency number 112 so that the dispatcher could direct him outside the built-up area. „The dispatcher calmed me.” When the German managed to leave the city on the spot, the fire brigade could cool and put out the cistern. According to firemen, the cause of the fire was a broken tyre. 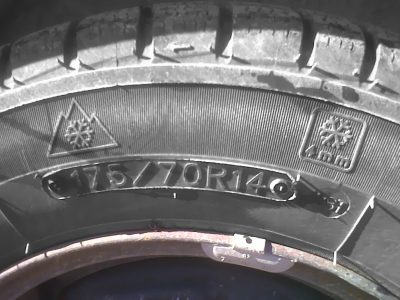 UK: tyres over 10 years old will be banned on lorries
New tyre markings, also for trucks. EP approved the new rules
Recording an accident and victims is a crime. Germany clarifies the rules and in...