“My husband is a choleric, a hothead. He blows up at small things. And this job makes it even worse. He gets upset over traffic jams, delays in loadings and dangerous situations on the road. Once, he called me from the hospital in Germany. His heart pressure was raised so much that he had to be taken by the ambulance. I didn’t know about anything. He called me only after he was stabilized. He didn’t want to admit to it,” heavily sighed Catherine Wilczura. Sometimes, she is really worried that Adam will have a heart attack. And he is a young man, he’s just over forty…

On this ill-fated day, when Adam was taken to the hospital, Catherine could expect that something was wrong. He did not call for a long time that is very unlike him. They usually talk five or six times a day. On the phone or Messenger. On the Internet families like theirs are called “SMS families”. It is not nasty. It is just a sound diagnosis of the situation.

Do not talk about it

Weekends, when he’s not at home, are the worst. Our friends go somewhere for a trip together, and I stay alone. I feel like crying,” says Catherine.

Instead, I prefer to go somewhere, do something. She weeds the garden, sometimes she goes out with their sons, but not so often anymore, as two of them are already grown-ups, over twenty, and two are teenagers who also chose to spend time with friends over their mother. Sometimes, she goes for a barbecue with her friends.

She does not talk about all of this with her husband. At least not in details because he would be awfully sorry.

He sees how many things he missed because he wasn’t at home, when the boys were growing up. So now, when his brother has small kids, he loves playing with them. He tremendously enjoys it,” she says.

Distance is not the worst problem

Now, Adam has slightly more time because he has changed job. He still drives a truck abroad, but now he goes to Germany, Italy and Spain, while previously he travelled even to Siberia.

But the distance has never been the biggest problem, it is the stress.

For eight months he had worked for a Dutch company, where they pushed him a lot. He could hardly unload the truck, when they required that he was in a different place with other goods. He complained that it was possible only with a plane,” explained Catherine. “Their boss didn’t want to give the drivers even days off for Christmas. He didn’t understand that for a Polish man it is the most important moment in the year. They had to fight for it really hard. It took its toll on his health. He was getting the jitters in that work,” she added.

Insomnia in the driver’s cabin

It is not surprising that Adam cannot sleep. When the day of departure is approaching, he explores the maps because he is so focused on being punctual. In the morning, he only drinks coffee and hits the road. It does not get better on the road. Once he was tossing and turning for a while at night, he heard some knocking all the time. Thieves? Not at all – it was a belt of the bag hitting the car body.

The work has a bad effect on him. He’s always stressed out, tired, gets out of breath. He suffers back pain, which is obvious after so many hours of sitting. When he drives at nights, he grabs some food from the fridge not to fall asleep. Of course, I know what he eats,” she said sadly. “But he doesn’t look like the plump drivers that you can see sometimes. Those with a flabby belly. He has a quite solid build, he just needs some workout.”

Maybe it will make him think?

But it is not easy with this workout. Catherine once took Adam to gym classes called “healthy spine”. They were even fun, but it does not matter as he could not continue because he had to leave a week later. Sometimes, she recommends him to “jog around the truck” at least in the car park, but she knows that it seems stupid.

The problems is that Adam is not an exception. His brother and cousin are also drivers. They are all so focused on work that they do not have time to think about their health. And they should because over 60 percent of professional drivers suffer from overweight or the 1st degree obesity.

I must do something, I don’t know, maybe I will buy him some sports accessories for his birthday?” wonders Catherine.

She is really scared that she will lose him. She was at several funerals of drivers. She describes them shortly: coffin on the truck, friends-drivers following in the funeral procession, the wife left alone after the whole thing with a child or pregnant.

On the other hand, she knows it is never too late for changes. Once, she got on a scale and was terrified. With a height of a little over 160 cm, she weighed 80 kg. “I looked in the mirror and saw a spare tire. I thought: no way, you’re too young to look like this and feel so horrible,” she said. Soon she lost 20 kg.

Maybe it will make him think? 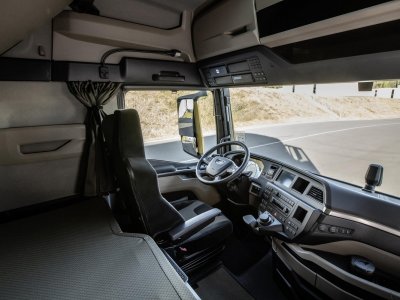 Lorry driver left his house to... 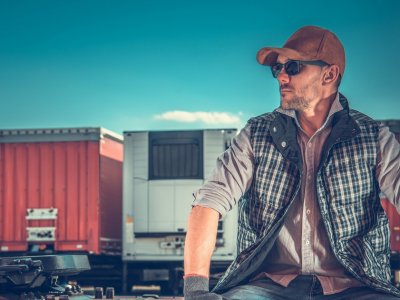 Without them, store shelves would be...

Lorry driver left his house to keep wife and children safe. He  has been living ...
Without them, store shelves would be empty in two days. Yet American truckers ea...
A special surprise for truckers. Would you use it?