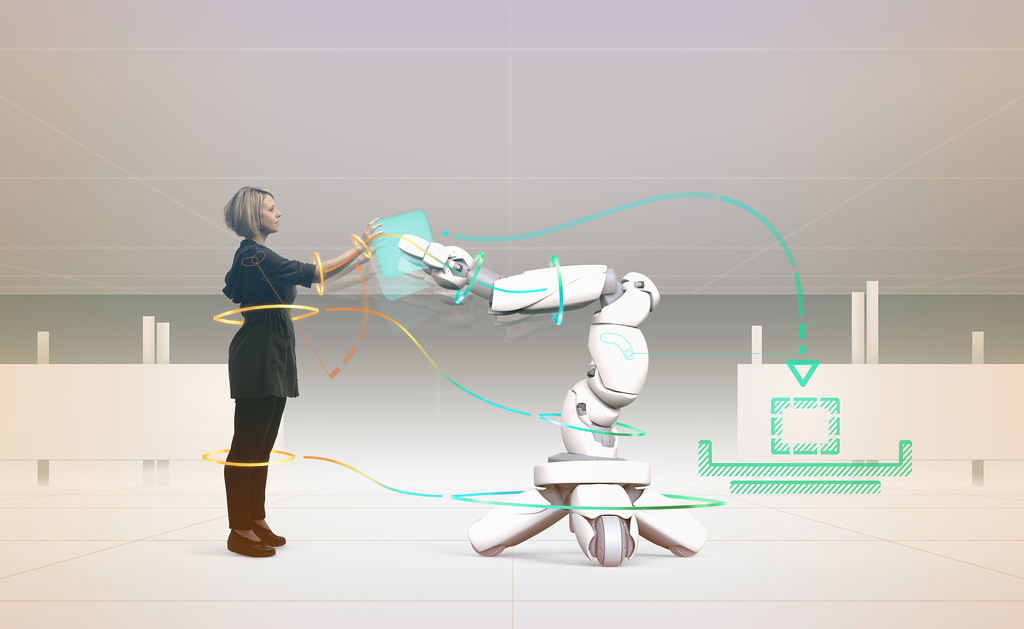 The word ‘cobot’ is getting increasingly popular. Sometimes they are used interchangeably with the word ‘robot’. It’s a mistake. Cobots (a combination of the words ‘collaborative’ and ‘robot’) differ significantly from robots. The latter usually work in special zones and are usually designed to achieve the highest accuracy and speed. The fact that they are usually located behind a protective fence practically prevents any cooperation with people. In the case of cobots, the situation is completely different.

It’s supposed to be easier, faster and more efficient, and according to Personnel Service experts, the challenge for companies implementing automation is to find the right balance between human and machine work.
The increasingly common collaboration between man and machine affects the nature of work, and the number of companies that have focused more on automation in the last twelve months than ever before has doubled, according to this year’s Deloitte report.

Cobots are machines designed to perform one or more tasks automatically, quickly and precisely. They may be controlled by an external control device or by internal software, and interactions may occur between robots and humans. In fact, it is the cobots who have the chance to bring about a real ‘revolution’ in logistics.

However, much earlier works on cobots were implemented by General Motors who recognized the need to use this type of equipment in the automotive sector. They were looking for ways to automate simple jobs. The idea was to create easily programmable, safe machines without high power drives, as is the case with typical robots. The first collaborative robots were created in the middle of the last decade.

When employees are not available, cobots can perform mechanical and repetitive tasks, e.g. picking or disassembly. We are also talking about activities related to the preparation of goods for loading. Cobots are used to collect goods and move them to a specific location (or to place them on an internal means of transport). Experience shows that equipment is able to perform routine tasks such as picking or moving goods faster and more accurately than people. By using and analyzing data collected by cobots, it is possible to predict the needs of consumers, e.g. by moving through aisles and using cameras, cobots can check the availability of goods on store shelves or shop shelves (such a solution has been applied e.g. in the Lowe’s chain of DIY stores).

According to the estimates of one of the online grocery stores, the implementation of robotics in warehouses translated into a 12% increase in sales

Specialists say that when some of the tasks performed by one key employee are taken over by a collaborative robot, the efficiency of the line may increase even by more than 30%. Cobots can, therefore, be a way of dealing with staffing problems.

Mateusz Amroziński (FANUC Polska), during this year’s Smart Warehouse conference, referred to data from the report of the International Federation of Robotics, which shows that soon one-third of the devices will be collaboration robots that give the possibility of side by side cooperation with man. Robert Jastrzębski (Europa Systems) pointed out that the process being automated is the key to choosing a specific solution (in the 1980s and 1990s heavy process automation dominated, followed by an increase in the number of systems related to fast packaging). Technologies are available and the ROI time depends on the application.

The market is changing in such a way that customers are getting ever more demanding (shorter series, shorter time, weight and force sensors, etc.). One has to be aware that the cost of the robot itself is 10-50% of the price of the workstation. TCO (Total Cost Ownership) is important, i.e. durability, servicing, easy programming, the possibility of extending the workstation, flexibility, said the representative of Europa Systems.

Specialists from SSI Schaefer point out that cobots are solutions not only for large companies. As an example, they mention the Weasel auto-guided transport system (developed by SSI Schaefer), a product that is also suitable for small-scale users. One unit costs around €10,000; the total cost including the infrastructure is usually less than €100,000.
These amounts are important when we talk about saving human labour or the possibility of assigning people who previously performed a given activity to another task. The calculation is simple: if, for example, the salary of a warehouse worker at a particular picking station is about 800 euros (3500 Polish zloties) gross, and the total annual costs of the workstation is almost 11.600 euros (PLN 50,000 according to the calculator zarobki.pracuj.pl) and if there are two shifts, then the cost of purchasing and installing a cobot amounting to about 46.000 euros  (PLN 200,000) is reimbursed in about 24 months.

In fact, such a calculation makes no deeper sense, because the main purpose of using cobots is to significantly increase work efficiency, and automation of processes, often associated with a reduction in the number of jobs, in this case, is not essential.

Scientists at the University of Illinois confirmed that, although the impact of innovation on employment was inevitable, new technologies would not lead to large-scale job losses in the short term. However, they will change the patterns of working.

According to American scientists, technology can intensify work in two ways. Firstly, it will reduce the number of people-to-people contacts and, secondly, it will allow a high level of monitoring of the tasks carried out. Machines are already able to control every movement of employees, e.g. by means of sensors that measure the time needed to perform a given task. The information is then analyzed and evaluated. Comparing the results achieved by individual employees may result in setting more challenging goals to be achieved by them. This, in turn, means an increase in the pace and accuracy of work, which affects the level of stress among employees.

Introducing innovations to the company is connected with reorganization of the existing patterns of working. Employees have to get used to the new situation in which part of their previous duties is taken over by machines. Of course, this is a big challenge, but also an opportunity for companies. It is important to manage the process in such a way as to find new tasks for employees, to use their potential in areas where machines cannot replace them. After all, employees are the most important asset in any company and automation will not change that any time soon, says Krzysztof Inglot (Personnel Service).