A Danish truck shop owner has told of how he turned back a lorry that was delivering stock because the HGV and its driver were not from Denmark. KJoF Truckshop, located in Fredericia, said on Facebook on Monday that it only accepts supplies transported by Danish carriers in a Danish lorry that's driven by a Danish driver, as is stated in its contracts. Some have praised the business owner for his patriotism, but others say his actions are discriminatory. 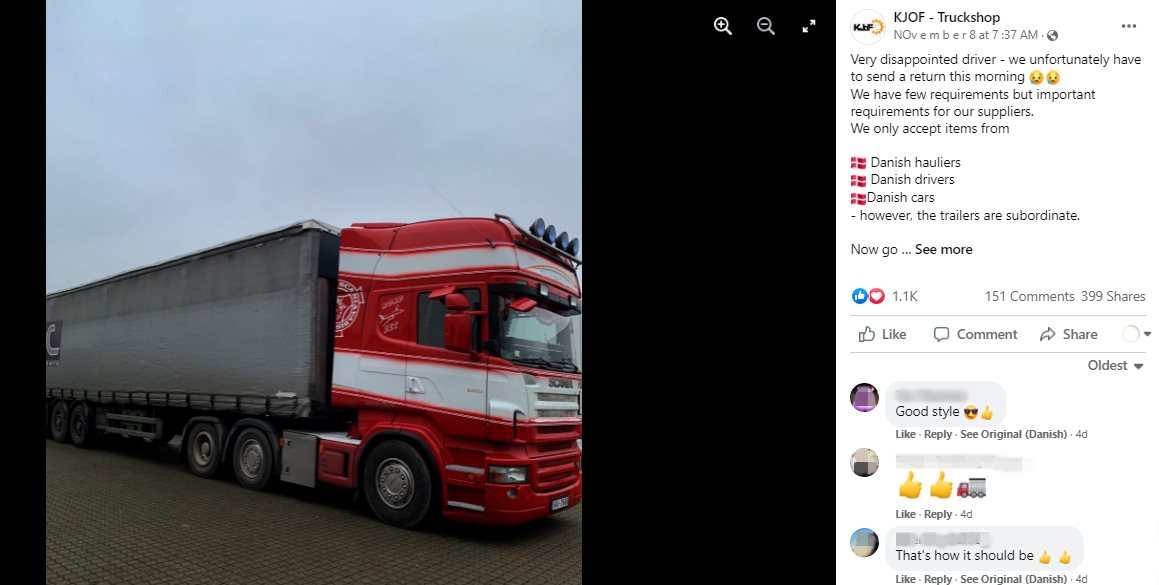 Since KJoF Truckshop published the aforementioned post, it has travelled far. At the time of publication, it has been shared 400 times.

As 28-year-old shop owner Marco Kjærsgaard explained in the post, the driver who he sent back that morning was very disappointed, but admitted “I really respect your decision to help Danish truckers”.

In Kjærsgaard’s opinion, the rules of working with his company are clear: KJoF Truckshop only does business with suppliers who can guarantee loads are transported by a Danish haulage company in Denmark-registered lorries driven by Danish drivers.

Therefore, when a truck with a foreign registration plate and a foreign driver parked in front of the KJoF warehouse on Monday morning, Kjærgaard insisted that the driver had to take the goods back to the Netherlands, where they originated. He also maintained that the supplier had to pay the extra cost of the return as the transportation was not carried out according to their contract.

In an interview with Lastbil Magasinet, Kjærgaard sought to defend himself by saying that if costs 1200 kroner to get a pallet from the Netherlands to Denmark on a Danish truck with a Danish driver, and at the same time it only costs 400 kroner if it is delivered by an Eastern European HGV with a foreign driver, and the fuel and fleet costs are pretty much the same in Europe, the difference must be the driver’s salary.

Therefore, Kjærgaard justifies his strict policy on the basis that he believes transport companies should not exploit Eastern European drivers.

“It is great that there is so much support. I have received private messages from drivers, large Danish hauliers and employees at large forwarding companies who think it is cool that we make demands on our suppliers about Danish hauliers, Danish drivers and Danish cars,” Marco Kjærsgaard told Lastbil Magasinet.

In the comments section underneath Monday’s post, social media users largely praised the shop owner for his policy, with a number also scolding those who did not agree.

On the other hand, some people think the story is disgraceful and that Kjærgaard is openly discriminating against foreign drivers:

“Nice! Really nice! I have lived in Denmark for 23 years, driving for a Danish carrier and getting a Danish salary. I have my own house and pay taxes in Denmark. But I’m not allowed to unload at your place because I have a Dutch passport? It is discrimination,” says one of those commenting under the post.

Others queried what would happen to the economy if every business were to adopt a similar attitude. There were also concerns that the policy could result in added CO2 emissions. Moreover, another comment suggested Kjærgaard was a hypocrite due to the fact his business purchases foreign components:

“There’s something I don’t completely understand…. You only want to use Danish hauliers, Danish drivers, Danish lorries, but you don’t want to buy goods in Denmark because they are expensive… So it’s ok to buy it cheaper abroad.”

Kjærgaard hasn’t answered those questions. What is known, however, is that his truck shop accepts customers’ money from anywhere in the world, as is stated on the company’s website.

Do you support the policy? Let us know your thoughts in the comments section of our Facebook Page.