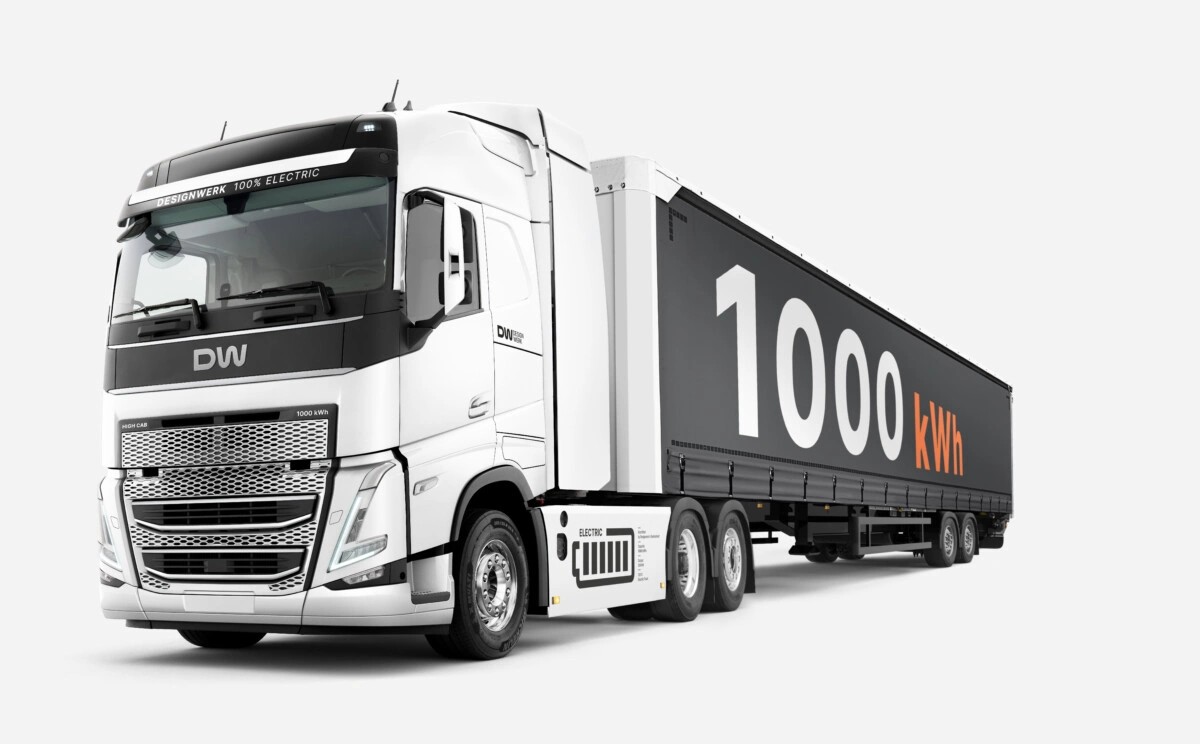 The company says its truck model represents “a new milestone in electromobility for the commercial vehicle industry, in that long-distance and heavy-duty transports are no longer restricted to diesel and hydrogen-powered vehicles”.

Designwerk also boasts that “the higher energy efficiency of the electric truck drive outshines the trio of diesel, hydrogen, and synthetic fuel drives by far”.

According to the company, of the the 1000 kWh available, 864 kWh are consumed in daily operation; the remainder is stored in order to extend battery life.

The Swiss e-mobility firm writes that this equates to a range of 576 kilometres with a 42-ton load. Depending on the load and route profile, up to 640 kilometres may be possible.

Commenting on the announcement, Designwerk founder and board member Tobias Wülser said:

“Large capacity batteries make the energy efficiency of electric trucks even more apparent. In this case, our electric vehicle consumes 52 percent less energy than a diesel vehicle.” It is not only from a commercial point of view that the figures favor the e-truck. With an average mileage of 120,000 kilograms per year, the CO2 savings with a Swiss electricity mix are 74 percent over the entire service life of the vehicle.”

Designwerk states that thanks to its special positioning of the battery systems behind the cabin and the resulting extension of the chassis by one metre, the vehicle is particularly suitable for use in Switzerland and the Scandinavian countries.

The option to charge the vehicle with 350 kW also allows it to be used in shifts. The electric truck charges 80% SoC in about 100 minutes.

The manufacturer argues that its high-voltage battery systems sport NMC technology and “stand out due to their modular design and high energy density in a small space when compared to the competition”.

The 40-tonne truck provides 500 kilowatts (680 hp) of power on the road and drives with the proprietary 1-speed transmission with no gear shifting, no clutch engagement and no jerking.

Designwerk says it is offering the vehicle as Mid and High Cab 6x2T. The company says the first such vehicles will hit Switzerland’s roads at the end of 2023.