After over seven days of severe freight traffic disruption in Kent, the good news is that things have abated over the weekend and the current delays are not as severe. However, with P&O still not operating on the Dover-Calais route, and with more traffic expected in the coming days, the disruption appears far from over. 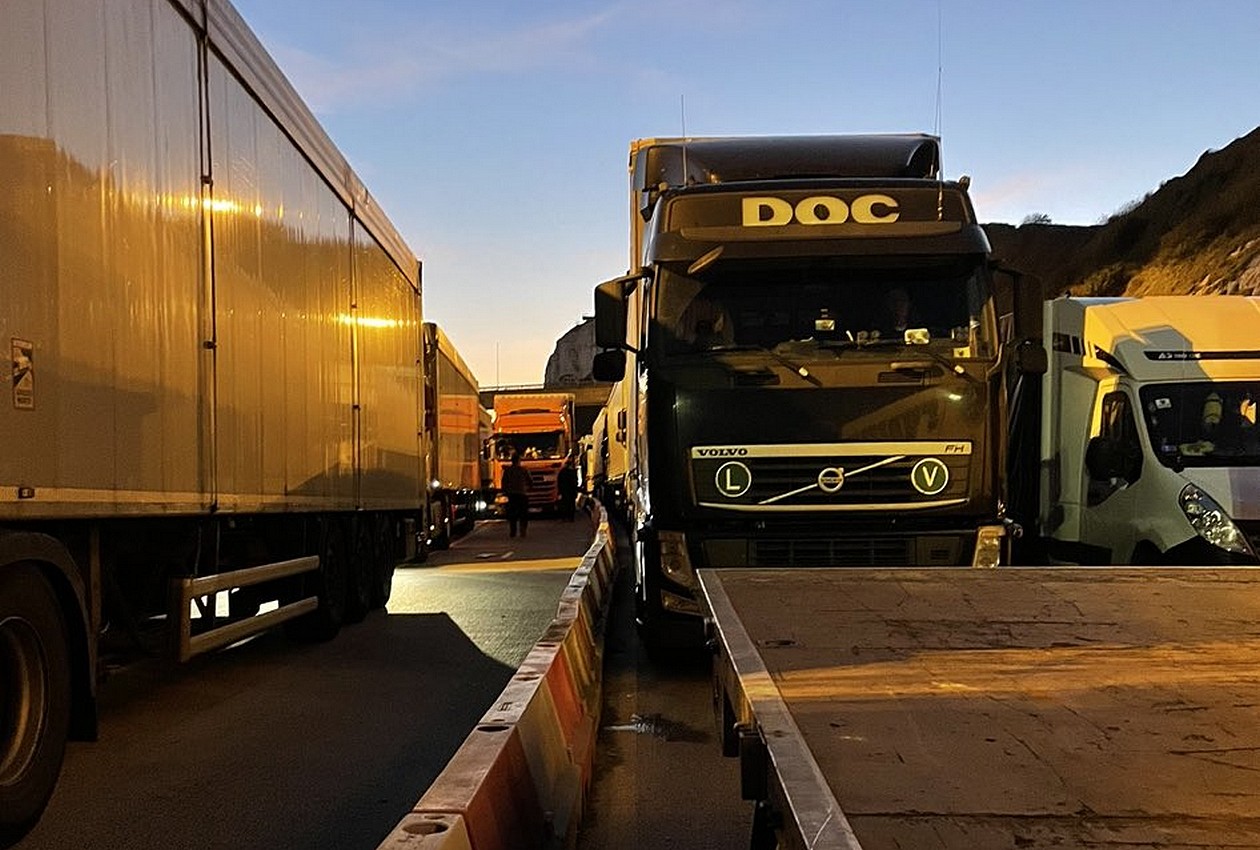 Here is our summary of all the latest developments regarding the freight traffic jams in Kent:

At the time of writing, 10.30 CET/09.30 GMT, Eurotunnel are running 3 departures per hour in both directions, with crossing times estimates at 2-2.5 hours.

Meanwhile, although the freight traffic situation in Kent is less severe than in recent days, there are still things to take note of.

First and foremost is the fact that Operation Brock is still active on the M20, which means the motorway is is closed to non-freight traffic between Junction 8 for Maidstone and Junction 11 for Hythe.

According to Kent Online, Brenley Corner is once again being used as a lorry stopping point, while Faversham junction is down to the one lane. In addition, the A2 Jubilee Way at Dover remains shut in the coastbound direction.

Over in Calais, aside from not-unusual build up of lorries close to the port and the Eurotunnel entrance, there is little in the way of traffic disruption.

Call for trucks carrying perishable goods to be granted priority

According to a BBC report published yesterday, “many in the industry” believe that the export of fresh produce should be prioritised in the event of severe freight traffic disruption.

A spokesperson for Logistics UK told the BBC that it is in favour of prioritising perishable goods, although there is a lack of clarity as regards how this could be done in practical terms.

“The delays are frustrating for industry and Logistics UK is working with DfT and the ports to identify effective solutions that can be introduced as soon as possible.”

On the other hand, Toby Howe of the Kent Resilience Forum also told the BBC that prioritising the export of specific goods is far from easy:

“It is not as simple as saying we will just fast-track meat or anything perishable. In 2015 we were given very general guidance and drivers got clever by putting a small amount in the lorry. For EU exit planning, Defra came up with specifics which we were then able to prioritise.”

Shane Brennan, Chief executive of the Cold Chain Federation, nonetheless believes that empty lorries should be the priority. Writing on Twitter, he added that the concern will be convincing drivers to come back to the UK in the week or so to come:

Right now priority is clear the backlog – the port and traffic mgrs should be prioritising the exit of empty lorries not 1 type of goods – the majority of lorries are empty + easiest to check through the port. It’s returning drivers we need to convince to come back next week! https://t.co/6FOKWcckOg

As we referred to in our last update on Friday, the disparity in the level of disruption in Kent compared to the Calais area has sparked debate about how much Brexit has influenced the logjams from the last week or so.

Some believe the GVMS downtime has been a factor, while others point to the loss of friction-free trade between Britain and the EU as contributing to the problems.

In the opinion of DFDS, the GVMS issue has “not made a material impact on delays at Dover”.

“DFDS says the outage of the post-Brexit IT system has not made a material impact on delays at Dover. It says processing times were unaffected, and staff were on hand to answer questions from drivers who were concerned that they might not have the right documentation,” tweeted BBC reporter Simon Jones yesterday.

However, during an appearance on Sky News yesterday, British Ports Association Chief executive Richard Ballantyne did list Brexit as a factor:

“P&O Ferries is out of service at the moment, which is probably the main cause of all the congestion – coupled with one or two other little incidents, and other Brexit scenarios.”

Despite the huge lines of freight traffic, ferries left Dover under capacity

A number of lorry drivers in recent days have been expressing their frustration over the fact that after queuing for hours on end, they end up boarding a ferry that is nowhere near full.

According to the BBC’s Simon Jones, who has spoken to DFDS, this is because lorries simply couldn’t get through the port fast enough.

On reports ferries have been leaving Dover half-empty, DFDS says there were periods yesterday where freight traffic could not get through the port fast enough: 'The Port of Dover are aware of this and all parties continue to work hard on improving traffic flow through the port.’

GVMS due to go back online today

According to the latest update from HRMC, as planned, GVMS will be functional again from 12.00 GMT.

P&O gets Larne-Cairnryan service back up and running

P&O has now announced that its Irish Sea service between Northern and Ireland is operational again. This could be a signal that the company is closer to doing the same with its Dover-Calais services.

#POCairnryan / #POLarne: Some of our services have now resumed sailing. Please see the current schedule for departures from:

We look forward to welcoming you on board..

Irish Ferries’ newly acquired vessel is now docked in the port of Calais, and appears set to start on the short-straits route soon.

Photos of the ferry in Calais have circulated on lorry driver groups, while tracking data from vesselfinder.com also confirms the ship is docked at the key French port.

Irish Ferries 3rd Dover – Calais boat is nearly ready. Isle of Inisheer. Not a stranger to these isles, used to be the Northern Merchant for Norse Merchant Ferries, many of us will have been on it before. Pic Peter Therkildsen pic.twitter.com/nVy3WqP1bq