Dover gridlock to continue with GVMS down until Monday

Another day on, the freight traffic nightmare in Kent is showing no signs of subsiding. Indeed, there are genuine concerns that Dover gridlock will continue after the bombshell news that the UK Government's post-Brexit GVMS system will remain down until Monday lunchtime.

Here’s our comprehensive summary of all the developments related to the continuing freight traffic problems in Kent:

The continued downtime of the GVMS system was confirmed by HRMC earlier today, and the news was soon transmitted by the RHA among others. In the opinion of RHA Policy Director Duncan Buchanan, the delay likely means that the current traffic problems shall persist.

In the email photographed in the tweet below, an HRMC employee is also seen confirming that the current continuity plans will remain in place until 12.00 on Monday April 11th:

Moreover, it seems that the Port of Dover expects the issues to continue across the weekend. Earlier today, it urged travellers to allow plenty of time for their journey and also follow their chosen ferry provider for any travel updates.

For those unfamiliar with the GVMS system, it did not exist when the UK was in the European Single Market. However, since GVMS became operational in January, hauliers have had to use the system to board the ferry or the train, cross the EU/UK border or clear their goods through customs.

However, this week, due to GVMS being down, a contingency plan has been place.

Commenting on the problem on Monday, the RHA’s Duncan Buchanan said:

“This has become a long running issue with GVMS going down and it is now getting concerning that the system does not appear to be working.”

The most recent update from DFDS shows Dover-Calais-Dover services running up to two hours late. Irish Ferries’ services on the same route are also delayed.

DOVER-CALAIS-DOVER | Services are operating with up to a 2 hour delay, please check-in as normal. Apologies for any inconvenience caused. #dfdshelp pic.twitter.com/MWUyleFbHj

The situation at Eurotunnel nonetheless seems noticeably better. There are currently 5 departures per hour in both directions and check in times on the UK side are now as little as 30 minutes. On the other hand, things are worse on the French side, with check in estimated to take 2 hours.

A further three junctions of the M20 have now been shut off in what has been labelled 'Brock Zero’. The coastbound carriageway of the motorway is closed up to Junction 11 as a result. The affected area is a stretch as long as 23 miles.

In addition, the Brenley Corner roundabout linking the A2, M2 and A299 will be reduced to one lane for the rest of the month. The A20 Roundhill Tunnel is also closed eastbound between the M20 J13 and the A260.

As we reported yesterday, there is talk of P&O being able to restart its sailings across the short straits within the next few days. On Wednesday, a P&O Ferries spokesperson said:

“From this weekend, P&O Ferries are getting ready to resume services across a number of vital routes. P&O has been working closely with regulators to ensure our ships are safe to sail. P&O is looking forward to welcoming back vital services and we expect to have two of our vessels ready to sail on the Dover-Calais route by next week, subject to regulatory signoff.”

Meanwhile, further capacity is also coming in the form of a 3rd Irish Ferries vessel.

The Isle Of Inisheer, formerly the Ciudad de Mahon, has been given a refit and was photographed in its Irish Ferries colours in this NI Ferry report. Bookings can currently be made for sailings on the vessel as of April 25th. However, it is reported that the P&O debacle could see Irish Ferries bring that date forward to meet demand.

The disparity between waiting times on different sides of the English Channel has also sparked debate about the impact of EU checks on British goods.

Live traffic data from Google Maps shows that there is considerably more traffic disruption leading to the Port of Dover compared to the Port of Calais (though Calais has its problems too – most notably at the Eurotunnel entrance).

The stark difference in the level of freight disruption has led to speculation that the significantly stiffer checks on British goods bound for the EU is a factor.

Spot the difference – one Is an entrance into a port in EU- U.K. and one is Uk – EU. Either no one is coming into the U.K. because of the mess on the m20 OR it’s because the U.K. is waving the brexit rules and the EU are enforcing the very rules Johnson said were oven ready pic.twitter.com/n1Zjasx1gf

Amid the ongoing problems, the DfT yesterday advised drivers to ensure they have sufficient supply of food, drink and medicines. However, little in the way of temporary sanitary facilities have yet been provided. According to Kent Online, such a move is “being considered”.

“Highways England, Kent County Council and Kent Police are all discussing the need for the toilets, with the possibility of Brock staying in place for an extended period of time looking increasingly likely,” the local newspaper reported yesterday.

“There seems to be a lot of discussion but no action!! Would you want to be in the position these drivers are?? I bet that is a resounding NO! So why have you left them having to use the motorway as a toilet? I think the HSE amongst others should be extremely concerned about this appalling state of affairs,” said Mr Barrow.

Mr Barrow also shared his views with a number of figures from the local authorities and the Department for Transport.

“We need tough measures to police this. But it is a very difficult situation. I feel so sorry for those residents that say the horns are blaring. They’re not sleeping. But the guys on the road aren’t sleeping. There’s no facilities. Now, there is people saying there is waste being dumped, there’s no facilities for these guys. And today we had a blow where the application for planning permission for a truck park at Wrotham was squashed. And, you know, the council is very happy in Wrotham, but the people in Dover aren’t going to be happy about it.”

According to a report published today by UKNIP, which claims to include photos of the rescue operation, a Spanish lorry driver was airlifted to hospital after falling from a bridge on the M20.

An overseas lorry driver has been airlifted to the William Harvey Hospital in Ashford with serious injuries following a fall from a motorway bridge near to Hospital road in Hollingbourne this morning.
Officers from Kent Police and Paramedics fromhttps://t.co/GXiLHeejoG pic.twitter.com/DJvA9ZPDns

It is said that the lorry driver had been waiting in Operation Brock and needed to use the toilet at the side of the road. The driver of the Spanish-registered truck then fell from a bridge as he left his cab. He was reportedly treated at the scene by paramedics after being stabilised by officers who were already in the area.

To make matters worse, further disruption hit the M20 today in the form a lorry that jacknifed in the middle of the Operation Brock queue. 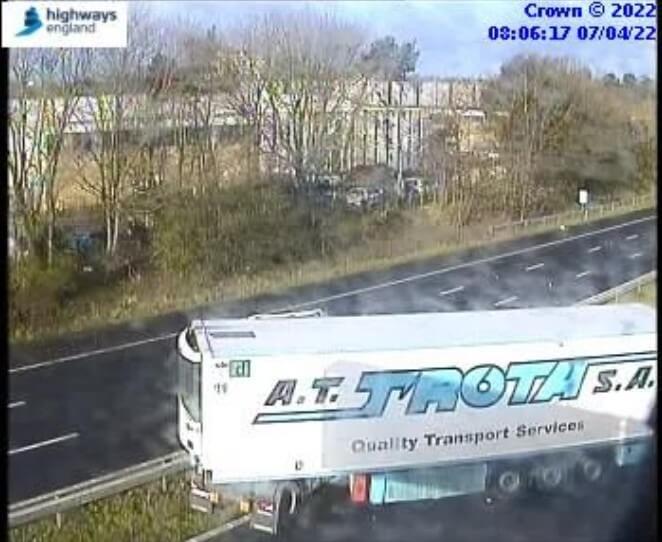 The accident, which was captured by Highways England webcam, shows a Spanish HGV with the words ‘Quality Transport Services’ written on the trailer. According to Kent Online, it was recovered relatively quickly.

As we reported yesterday, HGV drivers headed for the Channel Tunnel and Kent ports must join the queue for Operation Brock and could even be fined for non-compliance.

Kent Online stated yesterday that the £300 fines were not being handed out despite several drivers using unpermitted routes. However, today Kent Live says there are reports of the police toughening their stance.

Trevor Bartlett, the leader of Dover District Council has also criticised the practise and called for rigorous policing to stop HGV Drivers “jumping the queue by using Dover town centre as a rat run.”

Councillor won’t tolerate another weekend of gridlock in Dover

Mr Bartlett made the above comments in a statement on his Facebook Page today regarding the traffic situation.

“It would be remiss of me not to warn you to expect, and prepare for, some disruption again this weekend. But I have made it clear to the Kent Resilience Forum, Kent Police and Kent County Council that we will not tolerate another weekend of gridlock in Dover. For too long, local residents and businesses have had to endure disruption and quite frankly, deserve better. „

The Tory Councillor then added:

“We will be closely monitoring the situation at the weekend and I will not hesitate to authorise DDC officers to declare a major incident if we see signs of the sort of congestion we witnessed last weekend. Declaring a major incident would force the issue and trigger a more robust response.”

Nobody has been more frustrated by the traffic problems than the lorry drivers who experience it every day. Local residents have nonetheless been quick to air their irritations as well.

Over 76% of Dover residents voted leave in the 2016 Brexit referendum. Since then, there has been plenty of pushback against lorry park plans, Brexit inland border facilities, as well as Brexit traffic management schemes such as Operation Brock.

The situation this week has reportedly enraged some local residents, with Kent Live speaking to a few of them in this report yesterday. One anonymous local told the newspaper: “The authorities knew something like this could happen so where were they? Who’s going to actually take responsibility for this and sort it out?