If anything stood out on the first day of the IAA Transportation exhibition yesterday, it was the focus on new electric truck models. Daimler, DAF, Scania, Nikola, MAN, Quantron and Ford all unveiled electric lorries. There was also the matter of awarding the Truck of the Year 2023 title, which went to the DAF XD.

The truck unveilings not only marked a sign of things to come, but also signalled the importance of the return of IAA Transportation following a two-year coronavirus-enforced exile.

Michał Pakulniewicz and Sabina Koll, reporters from Trans.INFO’s Polish and German language services respectively, are in Hannover following the event. They are evidently being kept very busy given the sheer amount of new releases on show.

Here’s our summary of the goings on in Hannover on the opening day of IAA Transportation 2022.

One of the first manufacturers to unveil their new model was Daimler Trucks.

The German company’s eActros Long Haul sports a 600 kWh battery that powers the truck’s rear-wheels via two motors on the rear axle. The battery delivers 600 kW peak power and 400 kW continuous power. The batteries used in the vehicle are said to have a lifespan of 1.2 million kilometres.

The peak power referred to in the last paragraph, according to Daimler, corresponds to 815 hp, which is around 200 hp more than the most powerful diesel Actros.

Another key feature of the lorry is its fast charging. In just 45 minutes the battery can be charged from 20% to 80%, thus allowing charging to take place during mandatory 45-minute breaks.

“As with all our e-trucks, we will rely on early practical tests with customers for our eActros LongHaul. By doing so our engineers will be able to incorporate valuable knowledge gained from real-world operations – especially with regard to high-performance charging – directly into the development of the series-production vehicle.”

Another manufacturer to reveal an electric truck was Scania. 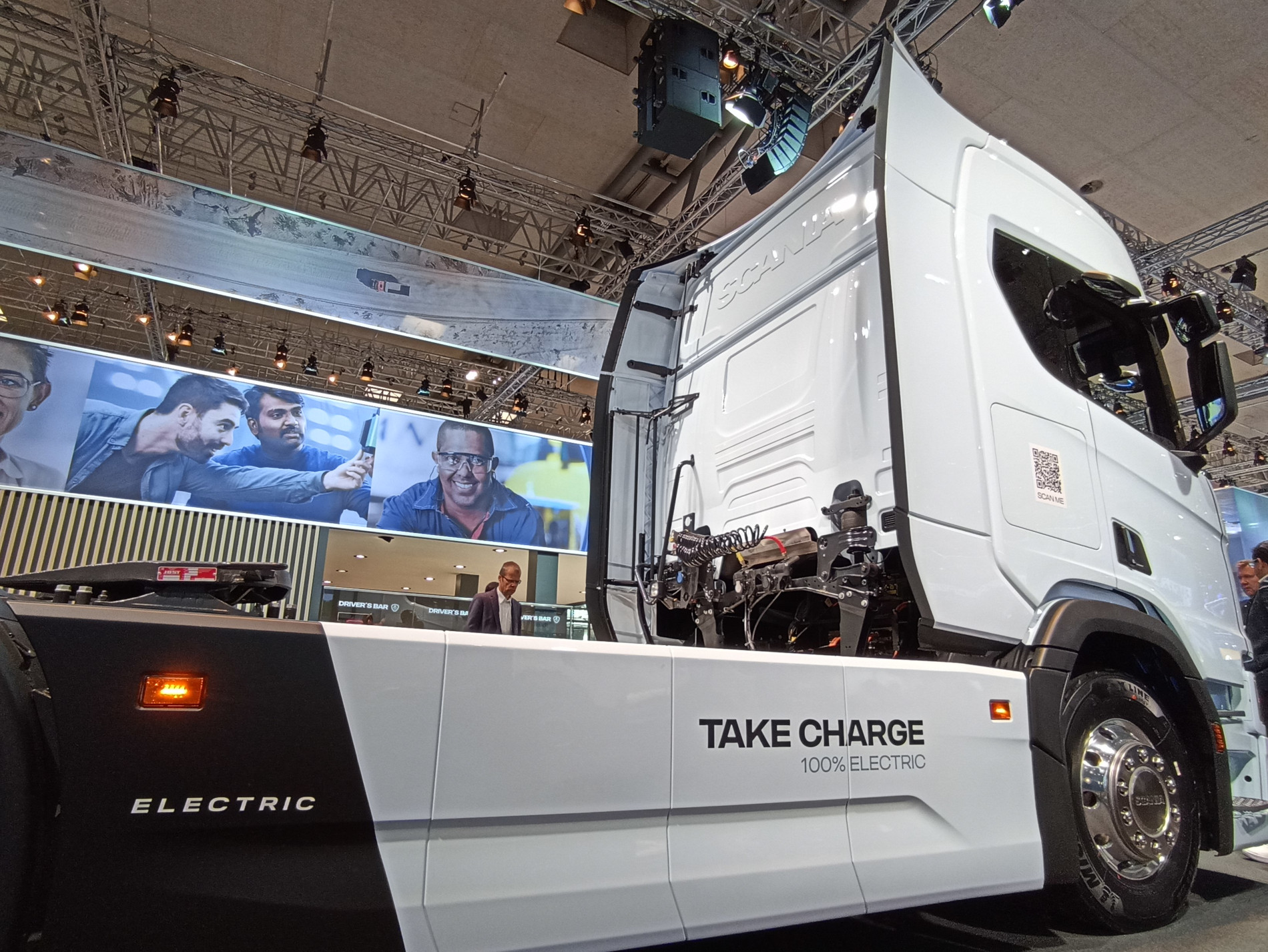 The Scania R45 is designed for regional transport use and can transport up to 64 tons. The lorry’s range is approximately 350 km and the model is expected be available in autumn 2023.

More details on the truck will be available later today. For now we know it shall feature a new motor that can transport a 40-ton trailer for 4.5 hours at 80 km/h. Moreover, it will take just 45 minutes to fully charge the battery.

“In our electrification journey, we are leaving city limits behind us and heading onto intercity motorways. We have recently delivered an electrified timber truck to a customer in northern Sweden. And that is a very real token of the fact that we now can electrify all heavy transport applications,” says Christian Levin, CEO Scania Group, in a statement regarding the company’s IAA Transportation exhibits.

By the end of the event, Scania says it will have shown of 14 vehicles in total, most of them electric. 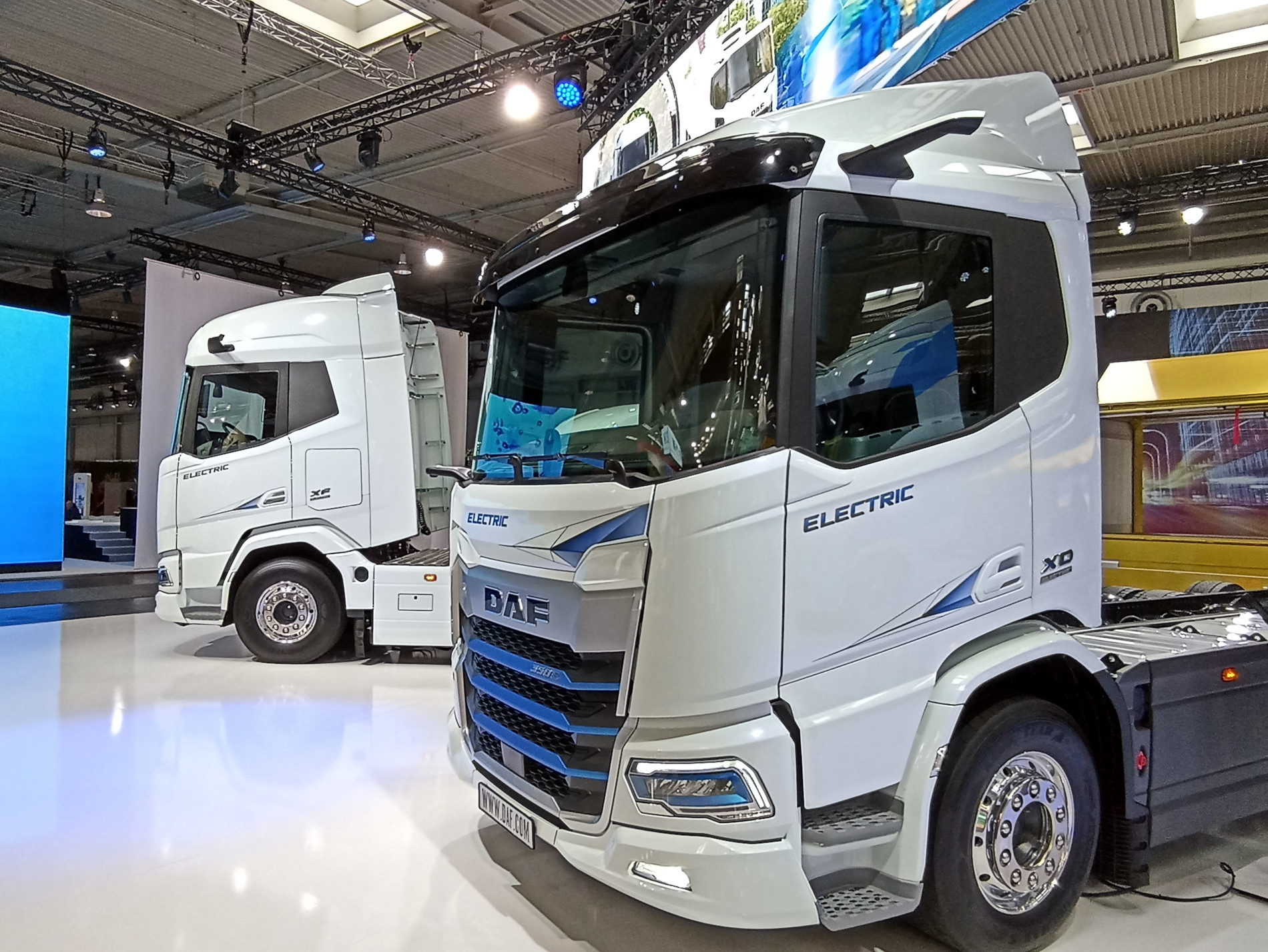 The DAF XD Electric and DAF XF Electric will become available as tractor and rigid models and can be ordered now. Production of the electric models is expected to start in the first half of 2023.

“To optimally tailor the New DAF XD and XF Electric to the customer’s needs, the efficient and reliable PACCAR e-motors deliver outputs from 170 to 350 kW (230 to 480 hp). In combination with battery packs of up to 5 strings, fully electric ranges can even exceed 500 kilometres, depending on circumstances and application,” says the Dutch manufacturer. 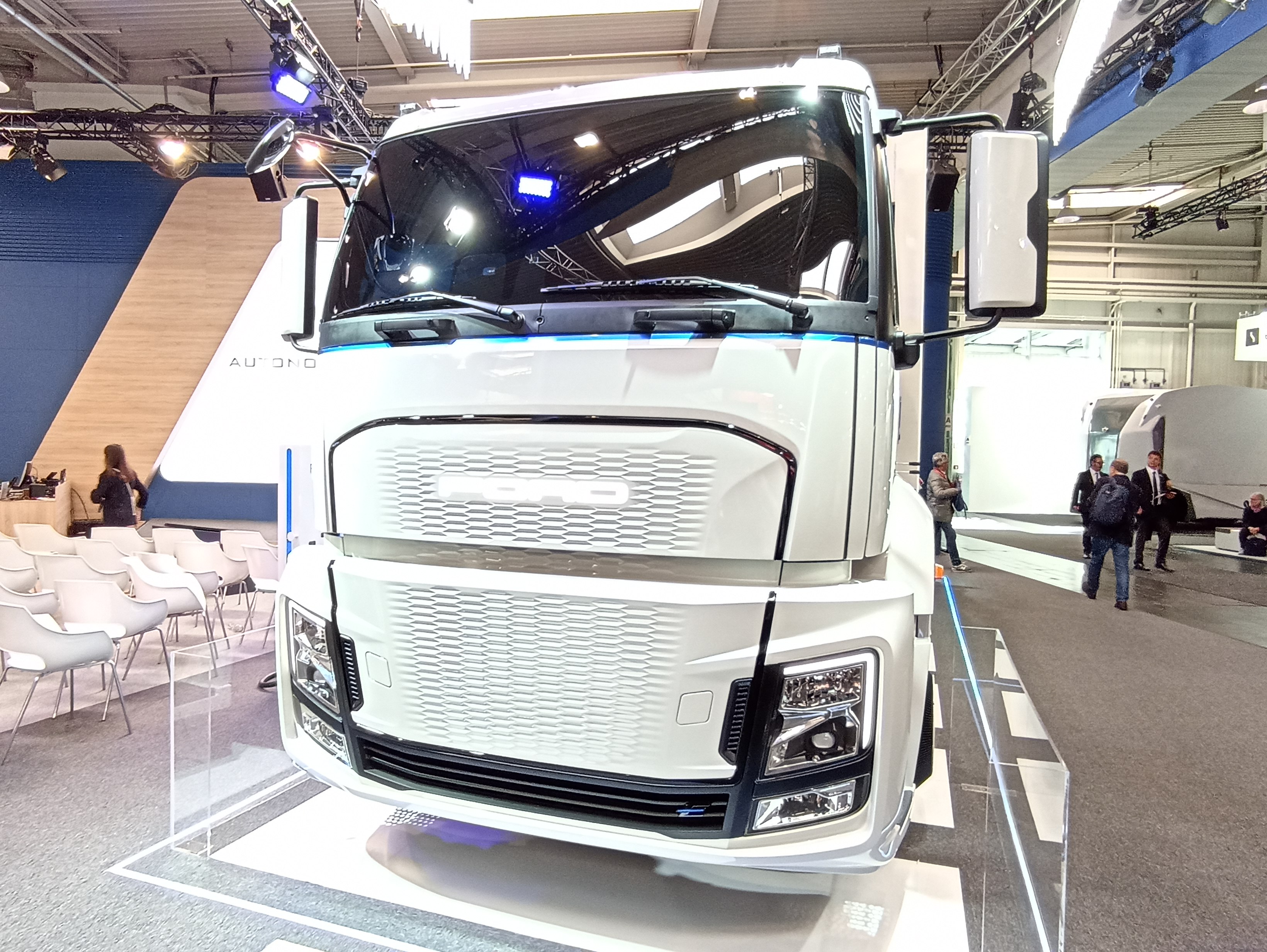 Ford Trucks also took part in the exhibition, revealing a prototype electric truck expected to go into production in 2024.

The prototype is currently being tested by one local authority in Turkey, which is where the vehicle is due to be manufactured.

The prototype presented in Hanover has an engine with a maximum output of 390 kW. The range is around 300km, with charging times around 75 minutes from 20% to 80%.

“Strengthening our position in Europe is our top priority. By continuing to build on our success in our current markets, we plan to reach 50 countries by 2024 in Europe. In line with the EU’s Green Deal and Ford’s global sustainability goals, we are taking a big step towards our 2040 zero emissions target by expanding into European markets with our electric trucks. In the short term, our target is to meet 50% of European sales as zero emission vehicles by 2030,” says Ford Trucks Vice President Serhan Turfan. 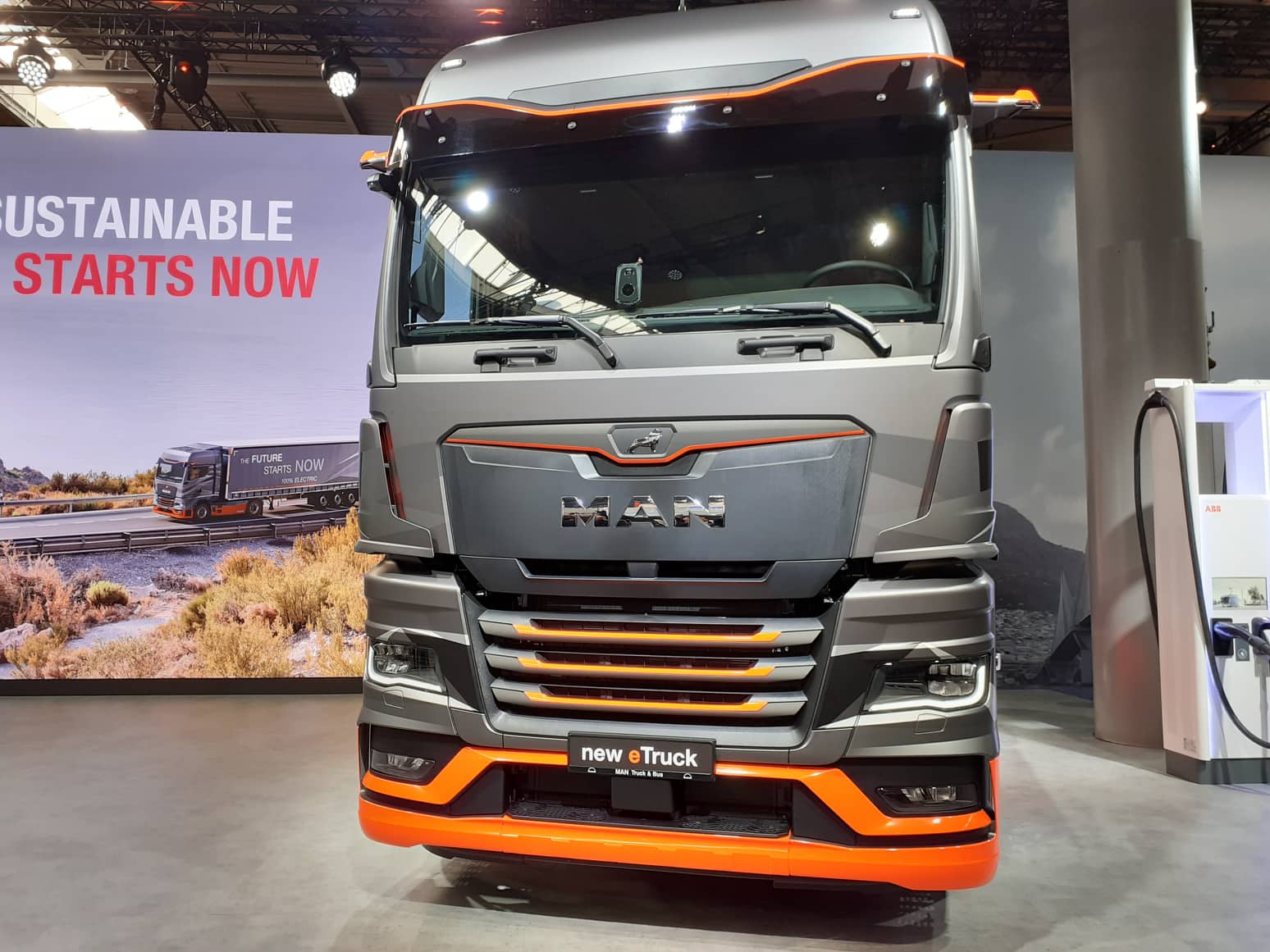 The new MAN eTruck on show at IAA in Hannover will be able to achieve daily ranges of up to 800 km by 2025, says the German manufacturer.

The vehicle is available in various different combinations, with the maximum power available being between 300 kW and 350 kW. 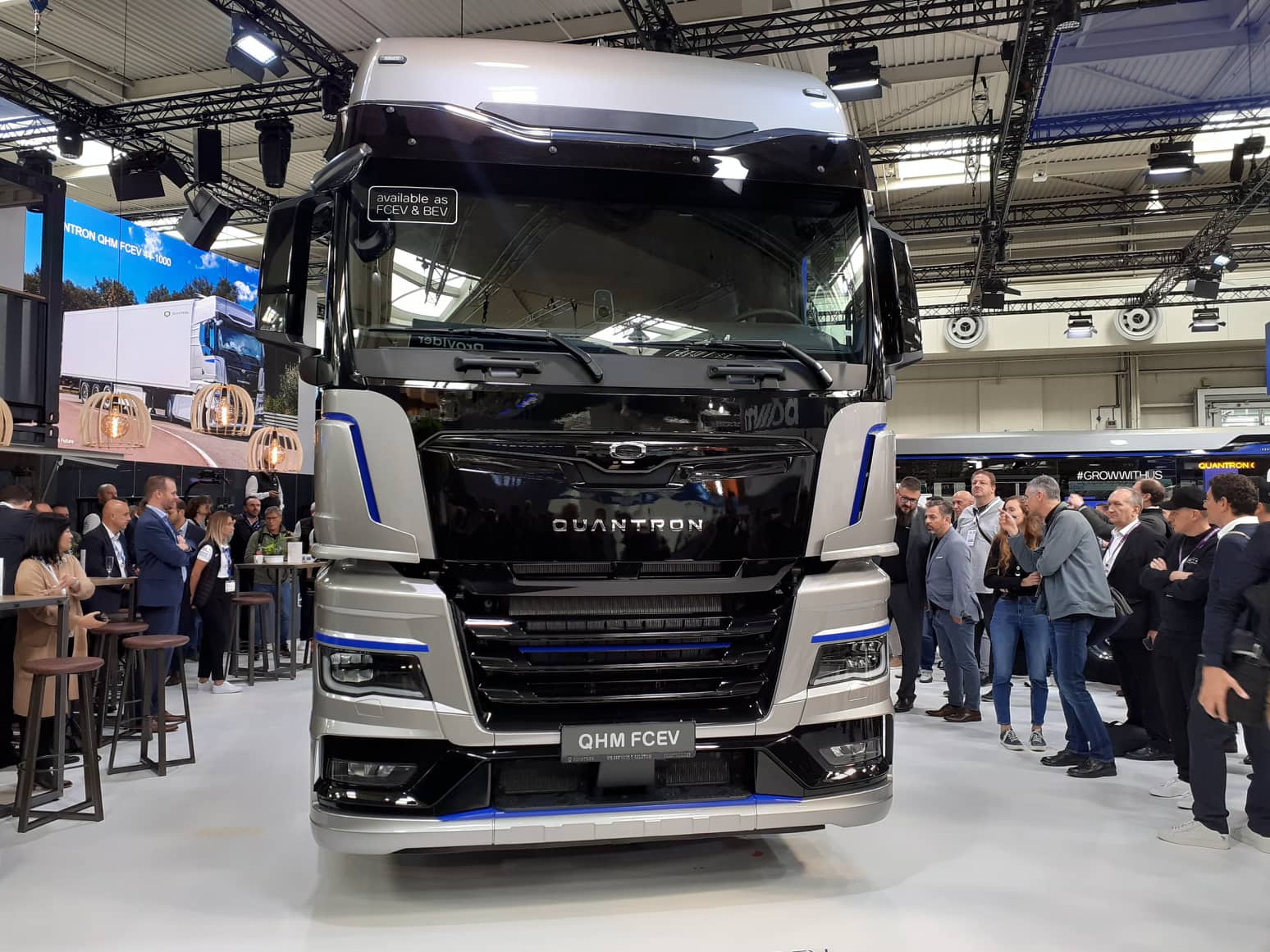 Quantron, another German manufacturer, presented a number of its trucks at the IAA Transportation as well.

Among them was the QLI FCEV, a hydrogen truck with a range of up to 500 kilometers. Its bigger brother, the FCEV Heavy Truck, has a range three times as much. The other of the hydrogen vehicles, the QHM FCEV 44-1000, sports a range of 700km.

The QHM BEV Truck was unveiled too. It is described as a near-production concept vehicle based on an all-electric platform with an operating range of up to 350 km. The truck is already available for pre-order. 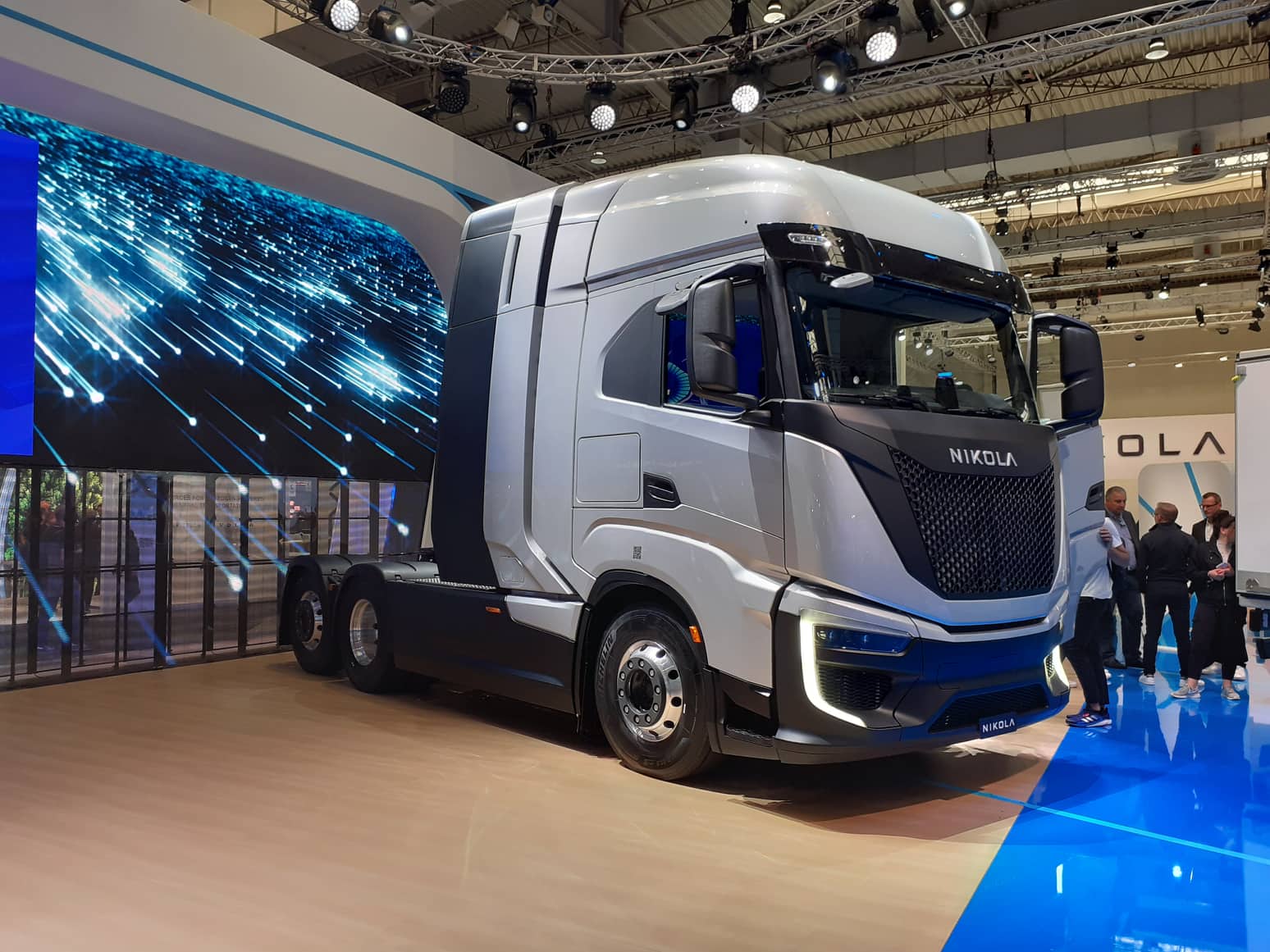 Last, but not least, we have Nikola, who together with the Iveco Group, revealed an upgraded version of the European Nikola Tre Fuel Cell Electric Vehicle (FCEV).

The Nikola Tre FCEV also comes in a hydrogen variant with a range of up to 800 kilometers. It will go into series production for the North American market at the end of 2023. For Europe, the Tre FCEV is scheduled to be produced in Ulm in the first half of 2024. 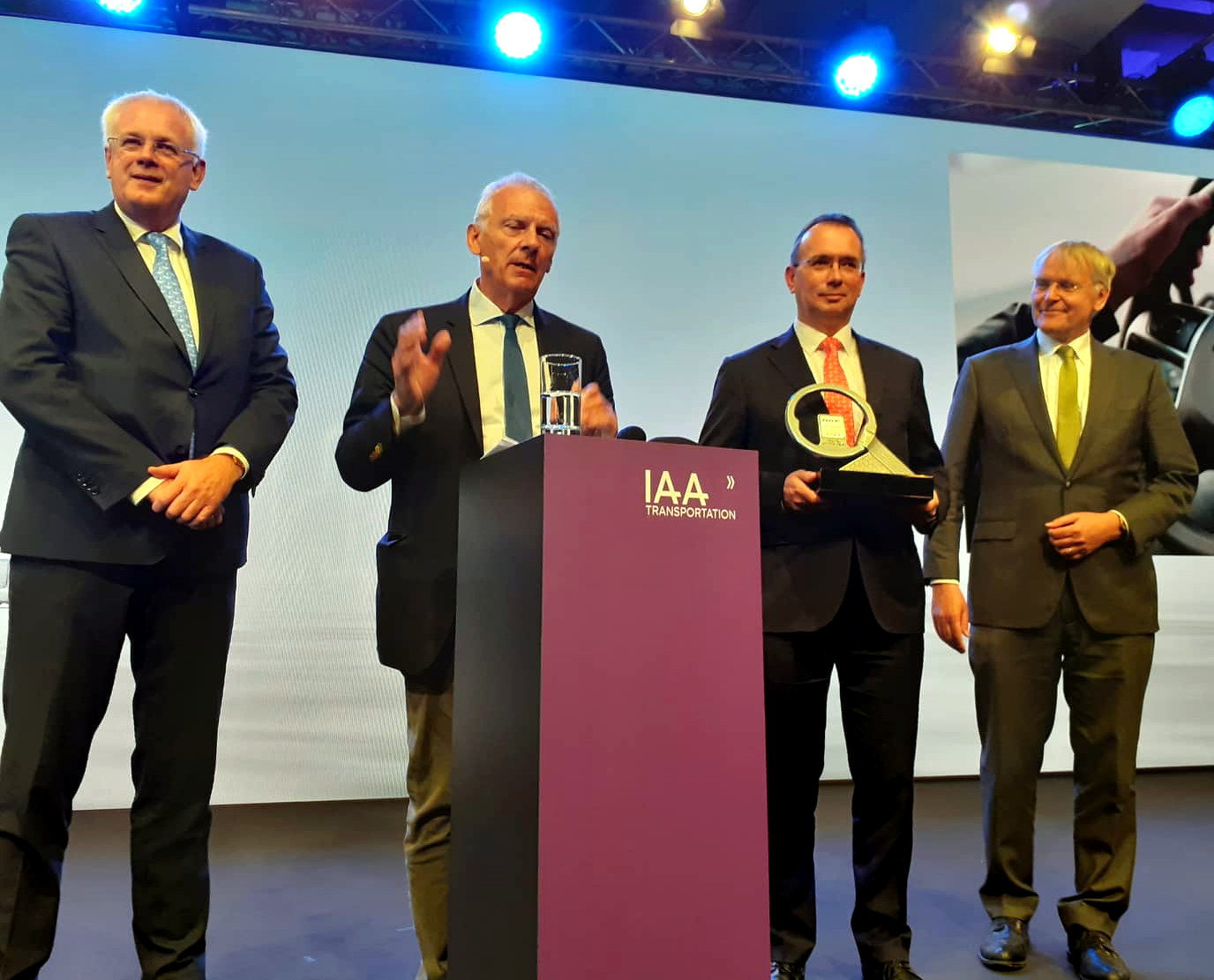 DAF scooped Truck of the Year 2023 for its XD model. The DAF lorry was chosen by a jury of 24 commercial vehicle editors and senior journalists, representing 24 major trucking magazines throughout Europe.

As pointed out by DAF themselves, the annual award goes to the truck introduced into the market in the previous 12 months, making the most significant contribution to road transport efficiency. This judgment relies on several critical criteria, including technological innovation, comfort, safety, driveability, fuel economy, environmental ‘footprint’ and Total Cost of Ownership (TCO).

“With the introduction of the new XD series, DAF has delivered a state-of-the-art distribution truck that sets a new benchmark in its class. The truck range significantly improves direct and indirect vision thus safety, a key factor for distribution vehicles. Also, the vehicle’s efficiency and driver comfort are introducing a new standard in this segment.”

Meanwhile, Daimler were the beneficiaries of the 2023 Truck Innovation Award.

The jury were said to be swayed by the German manufacturer’s “innovative overall technological concept with LFP battery technology, the new e-axle, as well as Mercedes-Benz Trucks’ high development speed.” 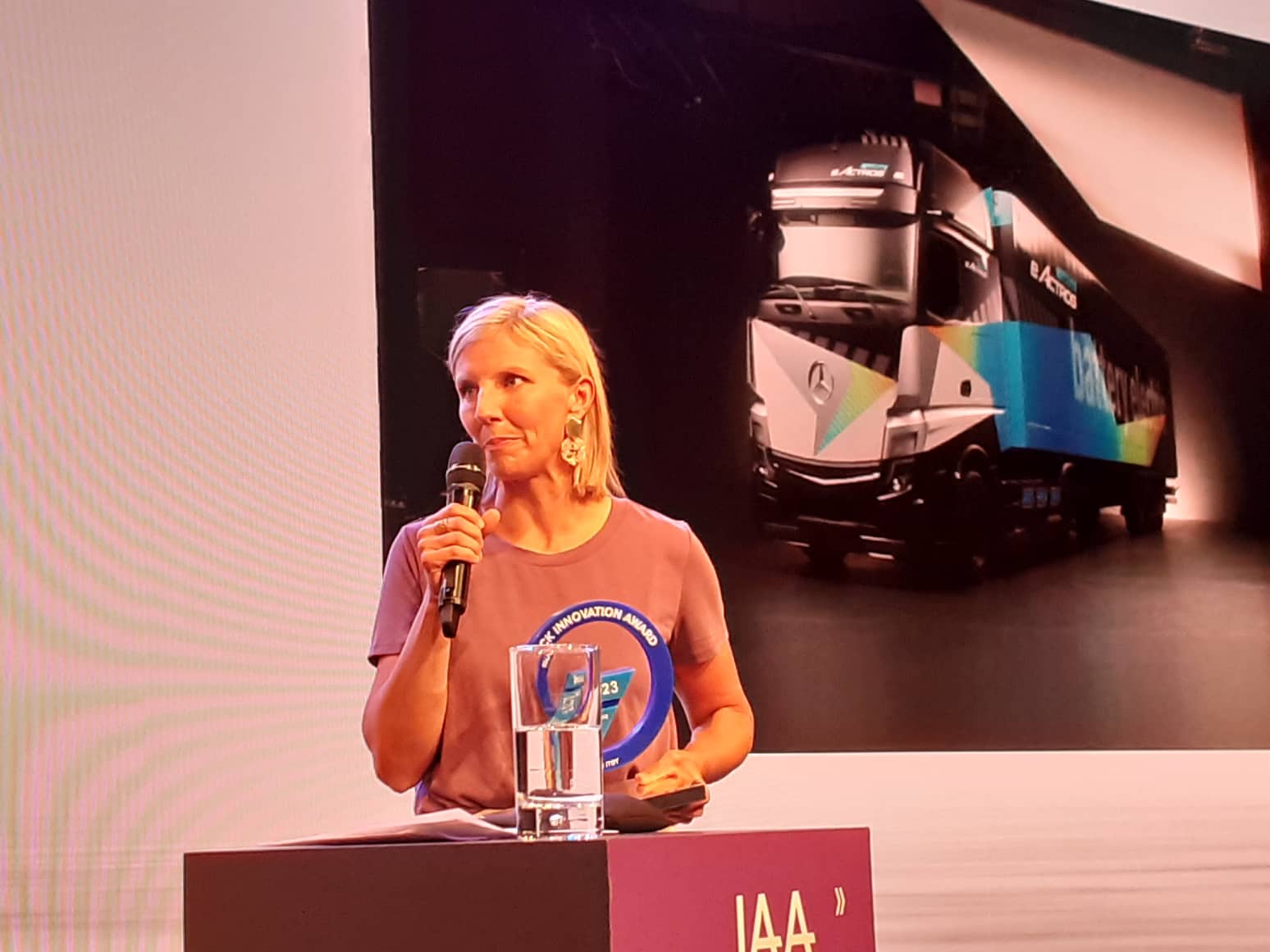