The European Labor Authority is due to start operating next year. A proposal for the creation of this new EU institution was presented by the European Commission on March 13, 2018. The new office might become a tool to limit the access of employees from Central and Eastern European countries to the labor markets of the Old Union.

According to the European Commission, from 2007 to 2017, the number of Union citizens living or working in a different Member State than the one they come from has almost doubled. Last year, there were 17 million people in the whole community. The European Labor Office is intended to assist citizens, businesses, and national administrations to make the most out of the opportunities associated with the freedom of movement and guarantee fair mobility of workers.

The new office, with a budget of 50 billion euro, will employ 140 people. It is not known yet where it will be located. The decision will be made by member countries. However, Brussels has already identified the three main goals to be achieved by the new institution.

First of all, it has to provide citizens and companies with information about open job positions, training opportunities, mobility programs and recruitment – says the European Commission’s communique. In addition, it should also provide guidance on rights and obligations related to living, working or doing business in another EU Member State.

Secondly, the ELA is to support cross-border cooperation between national authorities. The point is to ensure easy and effective compliance with EU rules protecting and regulating mobility.

The free movement of employees is currently regulated by numerous EU legal acts. Many of them – for example, provisions on the coordination of social security systems across the EU or the posting of workers – are currently under revision and modernization. It is not only about making these rules fairer and tailored to the needs, but that they can be properly applied and enforced in a fair, simple and effective manner in all sectors of the economy” – reads the statement.

Therefore, the office will perform activities to improve the exchange of information and capacity building of national authorities. It will also provide support for coordinated and joint inspections. According to the decision-makers in Brussels, this will have a positive impact on mutual trust and will help prevent potential fraud and abuse.

Finally, the third objective of the ELA will be mediation and assistance in resolving cross-border disputes, i.e. in the case of restructuring of enterprises operating in the several Member States.

– We currently have stable economic growth in Europe; employment is also growing, but we must ensure that economic growth is more inclusive and benefits all citizens. A number of steps have been identified in this direction: to ensure that rules enabling people to live and work throughout the European Union are well known and enforced; further implementation of the social rights pillar; the emphasis on greater support for the issue of social rights and the focus on access to social protection – said Valdis Dombrovskis, the vice-president for the Euro and Social Dialogue at a press conference.

In turn, Marianne Thyssen, Employment Commissioner (pictured), pointed out that the proposal for the European Labor Authority is the culmination of the efforts to promote fair mobility of employees.

ELA has an essential role for the good functioning of the European labor market. The Office will help citizens and businesses benefiting from mobility to find the right information, and it will facilitate a closer Member States cooperation to enforce fair and effective rules. We strive to ensure that citizens can receive appropriate benefits regardless of the developments in the world of work” – said Commissioner Thyssen.

Employers’ organization Transport and Logistics Poland notes that one of the main objectives of the ELA is to strengthen the control of posting of workers by supporting the conduct of coordinated and joint inspections of employers in the European Union.

At the end of last year, the European Commission held a public consultation on the new Office in which Transport and Logistics Poland participated. The organization then expressed concerns over the vague wording of the European Commission’s proposal which could lead to abuses such as restricting access to local markets for foreign employers as part of the freedom to provide services.

I already lived in a reality in which when a problem arose – an office, commission or new regulations and orders were issued. When the reality did not match the declared political goals, repression was tightened, controls were expanded and severe sanctions were imposed. Unfortunately, nothing has ever improved. That is why I see the European Commission’s proposal as a specific ‚deja vu’. And the effect on the EU economy will be similar to the effects of management in the times of socialism – states Maciej Wroński, president of the Transport and Logistics Poland.

One of the key doubts is what will be the relationship of the new EU office with the institutions responsible for the market and labor law in the Member States.

The intention of the European Commission to set up the European Labor Authority last year was announced by the President of the European Commission, Jean-Claude Juncker. The new EU agency will complement and streamline the implementation of initiatives already underway, including the reform of the directive on the posting of workers, specific provisions in the international road transport sector, and the modernization of Community rules on the coordination of social security systems. Decisions on its establishment will be examined by the European Parliament. The heads of states and governments of the EU countries will also talk about this at the European Council meeting on 22 and 23 March 2018. 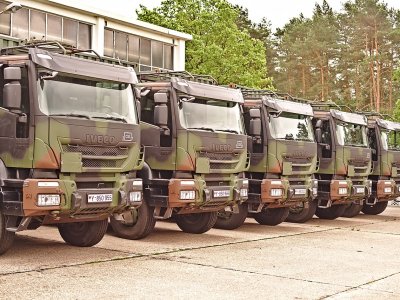 The EU Council approved Mobility Package regardless of the appeal by eight count...
If Eastern European drivers stop carrying goods, Germany will need help. They’re...
Mass production of electric trucks powered by fuel cells will be launched within...