First Calais, now Caen. Armed with knives, refugees set up makeshift roadblocks to get into the trucks 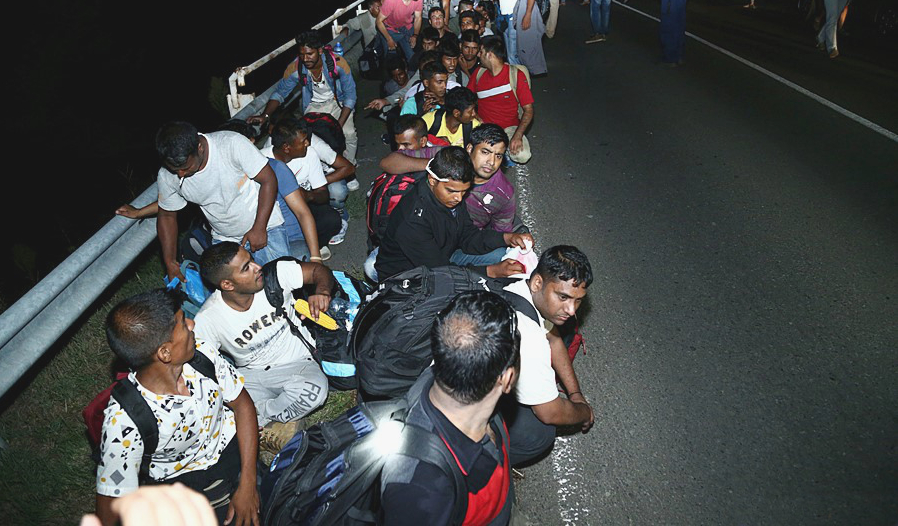 The British media alarms that the gangs of refugees stop trucks at makeshift roadblocks in Caen to get to the United Kingdom. After the French authorities tightened controls in Calais, the migrants moved to Caen in Normandy. The situation is so serious that the British Road Haulage Association (RHA) appeals that the problem should be dealt with by the French army.

The police in northern #France are heavily outnumbered, @RHARodMcKenzie tells @VictoriaLIVE French military should be deployed to keep the migrant situation under control so lorry drivers can be safe at work #Caen #MigrantCrisis pic.twitter.com/P9UKEsWCWS

Truck drivers themselves also report that around 200 migrant armed with knives hang around the access points to the port. They have several ways to get into the vehicle. Sometimes they force drivers to stop by creating roadblocks on the road, and sometimes they jump in when a truck approaches a roundabout where it has to slow down. British media reports that in the forests around Ouistrecham, a few kilometers from Caen, some 150 refugees from Sudan set up a camp. The place has already gained a new nickname – „mini jungle,” referring to the camp at Calais.

They are just sitting, waiting for you to pass. Unfortunately, there is a roundabout. You have to slow down. If you don’t slow, they will run in front of you. They’re trying to get into the back of the trailers, open your doors. They all have knives because once they get into the trailer, they have to get out and even if they open the doors to get in, to get out they generally cut the side of the curtains” – says British Broadway TV spokesperson BBC Sherralin Ballard who drives the international route behind the truck wheel.

EXCLUSIVE: Is this the new Calais? Lorry drivers tell us 200 armed migrants are hanging around near Caen port in France.

Lorry driver Sherralin Ballard told us how they try to get into their trucks. pic.twitter.com/3b18trHNxp

Some decide to swim through the channel

Some refugees have a different way of crossing the border. They pay for smugglers who offer drivers 2 thousand pounds for „space” in their vehicles. The trouble is that refugees get on board of the ferry during a trip and go to the trucks of other owners or climb to the roofs.

The local police are trying to deal with the situation, but it is not so easy, because migrants often move or find other ways to cross the border. At the end of May, the French navy saved five Iranians who wanted to swim across the English Channel.

Refugees also benefit local gangs who catch drivers at gas stations on their way to Caen, offering money for smuggling illegal passengers to the UK. Smugglers take 9,000 pounds from migrants for transport to Great Britain.

We have evidence of the actual and current threat to the lives of truck drivers who are simply trying to do their job. Real problems arise when trucks are forced to stop before makeshift roadblocks, where gangs try to get on board – often threatening with violence. We have also been told about threats of rape against female drivers. There is no doubt that the risk for drivers is significant and the situation is getting worse” – comments Rod McKenzie, head of the British Road Transport Association (RHA).

The British authorities urge truckers to call RHA incident reporting line in the case of an attack (+44) 1274 863 111. The association, in turn, will forward information to the British Border Force and Home Office.

With increasing reports of gangs trying to board lorries in the #Calais and #Caen areas we urge members to report migrant trouble on the RHA Calais Incident Reporting Line (+44) 1274 863 111. We pass info to Border Force and Home Office https://t.co/e2EjZp5mZd #RoadwayLive pic.twitter.com/VFdDlkmE30