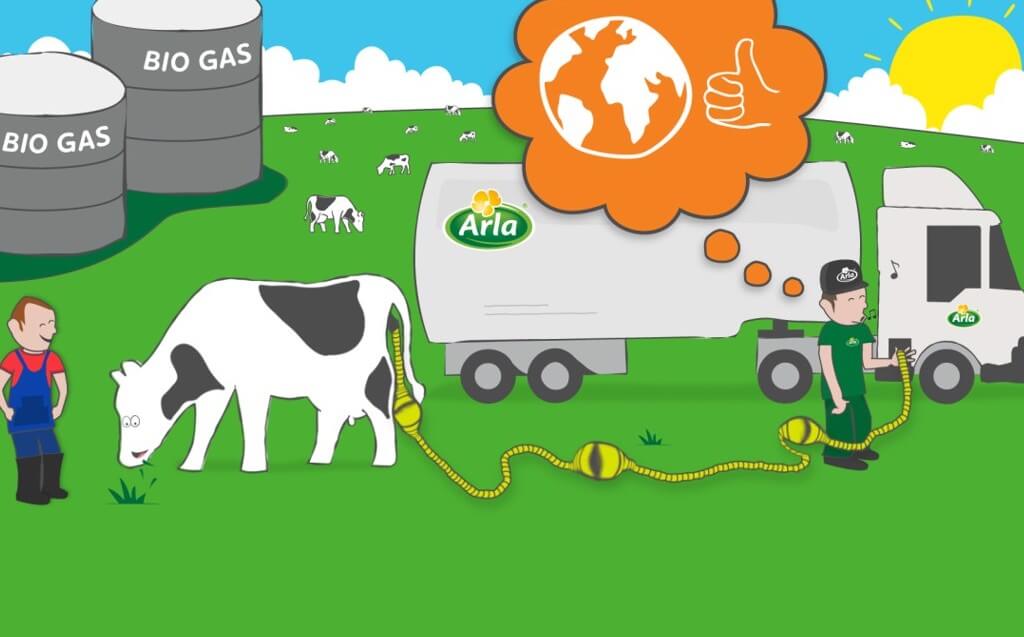 The UK division of Scandinavian dairy producer Arla are using 190 tonnes of cow manure every week to produce enough biogas to run two of its milk tankers.

The milk tankers will run on the biogas, which is being produced with the help of natural gas supplier Gasrec, for an initial 3-month trial period.

Gasrec sya they can transform cow manure from its farms into biomethane (Bio-LNG), which in turn can be injected into the national grid. The biomethane can also be drawn down and used to fuel vehicles. As part of the Arla-Gasrec trial, 2 tankers fuelled by the biogas will transport milk from participating farms to the cooperative’s dairy processing sites.

Together, the two trucks will cover around 90,000km during the trial and help reduce Arla’s carbon impact by around 80 tonnes – the equivalent to 23 car journeys around the world.

Some components from the manure are also being used to make fertiliser for Arla’s farms, enabling the dairy producer to get even more from its cow waste.

Graham Wilkinson, Agriculture Director at Arla, says that the trial could be prove to help to bring about a greener future:

“Using manure from our farms helps us reduce our waste and rely less on air-polluting fossil fuels, so we can already see clear benefits. With the help of our partners and suppliers, we have created a fully closed loop which, at scale, could be revolutionary in helping fuel a greener future.”

Arla have already conducted a similar trial in Sweden; in June of last year the company declared that manure from 81 of their Swedish farms had produced 54 million litres of fuel for milk trucks and city buses in the country.