– Valentine’s Day? – Anna Gawęda looks at the calendar hanging by the window, above her head. – Oh, it’s the middle of the week, we won’t come up with much. I think we’ll only hold our hands, like children – she says. They are not far away from each other – she sits half a meter from Jerzy. 24 hours a day, sometimes seven days a week.

On Monday it’s not possible to talk to Anna. She answers the phone after the fifth signal:

Okay, good, but let’s talk about it tomorrow, because I’m looking at the phone, I already have a traffic jam on the A14, I’ll be touring it now, I have to focus on it. And around 10 p.m. unloading near Derby. Maybe tomorrow? – she asks in a hurry.

(No sign of Jerzy, he’s probably sleeping. Or maybe he is looking carefully at the roadsides and viaducts? A few months ago someone broke their window with a stone).

Anna, a chemist by education, “had to re-furnish all her life to become a truck driver.” It started when Jerzy had to change his life.

He worked on the construction site as a concrete mixer operator. It was not bad, but first, one company declared bankruptcy, then the other did not extend the contract.

He was unemployed – recalls Anna briefly. – Driving a truck on international routes was actually the only way out of the difficult situation we found ourselves in.

This difficult situation can be expressed in two numbers: 115 euros of allowance, 3 children at home.

Anna argues that she is an “indestructible woman,” so she doesn’t complain about the three years when her husband disappeared for six weeks on long journeys, carrying goods across Europe. The youngest of the children was 13 years old at the time. She went to school alone for interviews. She ran the house herself, helped with lessons, etc.

When Jerzy returned, it was only for 45 hours, sometimes for 60.

Rarely was the time for getting out together. No wonder, after his return he wanted to enjoy the time at home. Sit with the kids, cuddle by the fireplace. That’s all.

And she was unsatisfied; she wanted more.

My zodiac sign is Gemini, I can’t sit still, I get bored when I sit in one place – she explains. – My mother worked for 35 years in one company. 35 years! I wouldn’t be able to do that.

But the “longing for the man of her life” was most painful for her. That’s what she says, no irony. That’s why she started to implement her Secret Plan.

Brunette at the wheel

When Anna talks about the Plan, her voice is full of laughter. Jerzy probably doesn’t hear that, because he’s still in the bathroom, in a moment he will sit behind the wheel. It’s quiet in the cab, no music because in her free time Anna prefers to read aloud to Jerzy. She prefers to read poetry – Janusz Wiśniewski, Halina Poświatowska. Anna recites a fragment of a poem from memory. Although it happens that she reads alone and he watches television.

The CB radio is switched off, because, as she says, they had already had enough of the “nerves, stupidity and curses” that they listened to there. When they noticed that it started to affect them in a bad way, they got rid of CB. But who knows, maybe Jerzy got bored with the comments thrown by the crackling speaker. “Gentlemen, what a brunette at the wheel! Where are you going to, sweetie?”

They hit on my wife – he laughed but at the same time anxiously wriggled at his berth.

The implementation of the Plan began with the fact that Anna Gawęda went to the Labour Office, registered as unemployed and received funding to change her professional qualifications. And then she obtained a category C driving license.

There is no denying that the idea was born during one of the trips lasting several days, when she and her husband drove a large part of Europe by truck. It was in Denmark, or maybe in Spain.

What matters is that after one of the six-week trips, there was champagne waiting for Jerzy at home. It was something worth celebrating because the surprise hit the recipient’s taste. After all, it was time to celebrate, because the surprise pleased the recipient. Some time had passed and she had a certificate of professional qualifications. She went to the company where he worked with no fears. They were looking for a driver, why shouldn’t they hire her and team up with her husband? And then she made a rookie mistake. 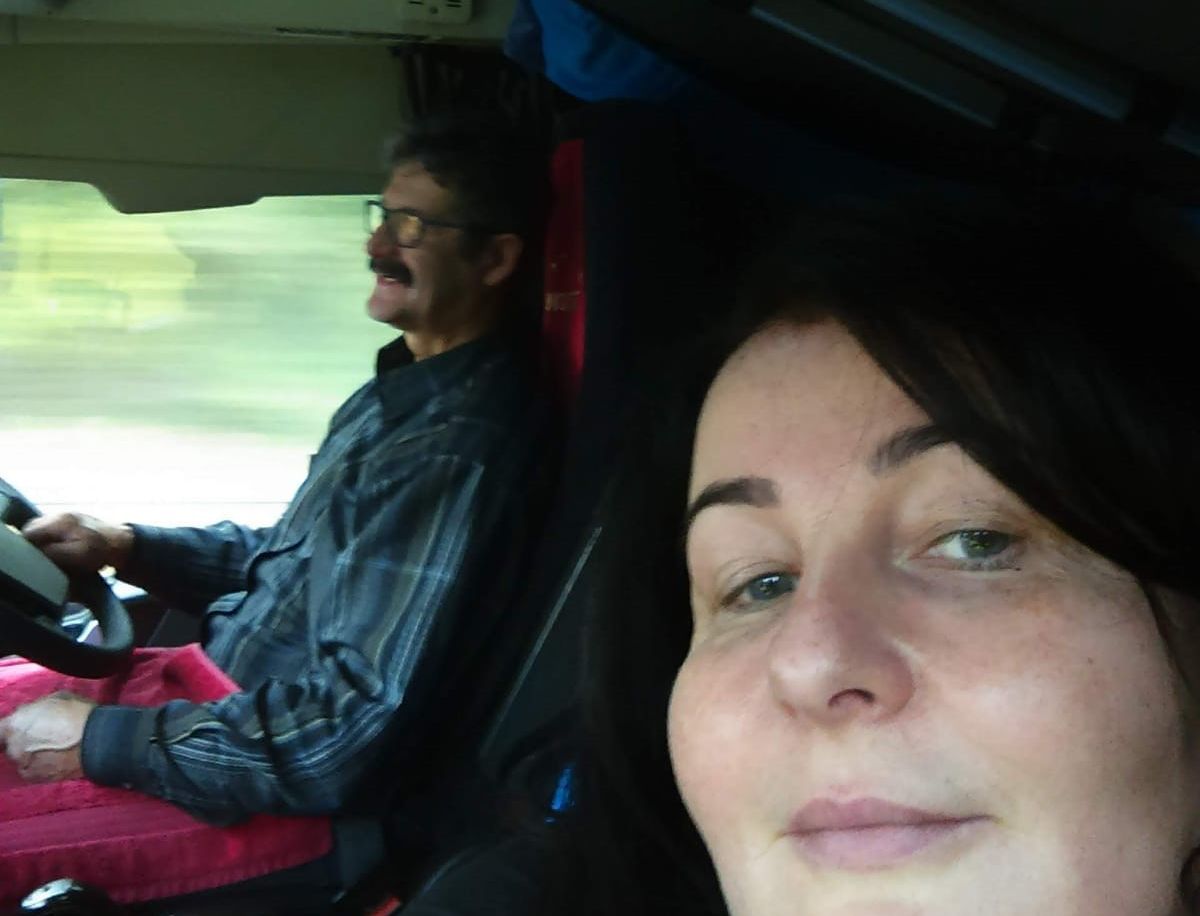 You ask me about cosmetics, and I just love cosmetics. I always buy something in a duty free shop. There I can get two bottles of perfume for the price of one in Poland. I carry these cosmetics with me, quite a lot – she laughs. – Loose powder, fluid makeup, lipsticks for special occasions, a bottle of Armani…. I am a driver, all right, but I am also a woman. I like to feel good – she adds.

No wonder that she went for a job interview in a suit. With a handbag. After all, there are some rules on how to dress for a job interview. The only thing is that the employer, encouraged by the driving license, immediately wanted to push the couple together on the road.

But how, in a suit? With a handbag you go to the office, and not behind a wheel – sighs Anna.

For three months she worked for another transport company  but got back. In Delta Trans Logistik, where they now work with Jerzy, a couple in a double manning does not impress anyone. There were seven couples like them at some point. Then some of them went away – to other companies, or to work on their own.

Such a lifestyle does not destroy marriage, on the contrary – Anna assures.

(Jerzy confirms her words in the background, to the sound of slamming doors.)

And how many marriages have been destroyed by such many weeks of parting! – she adds.

Yes, the beginnings were hard. Especially for kids, because they had to learn to take care of themselves.

They were not babies, the oldest one was 17 years old at that time. The rest, too, was not much younger – recollects Anna. – They were taken care of by grandparents who live in a house nearby, a few hundred meters away.

The problem is that the grandparents can make something to eat, but they won’t clean the whole house. You also need to prepare the laundry yourself. Gawęda admits that children had a quick start in adulthood. Suddenly they had more responsibilities. 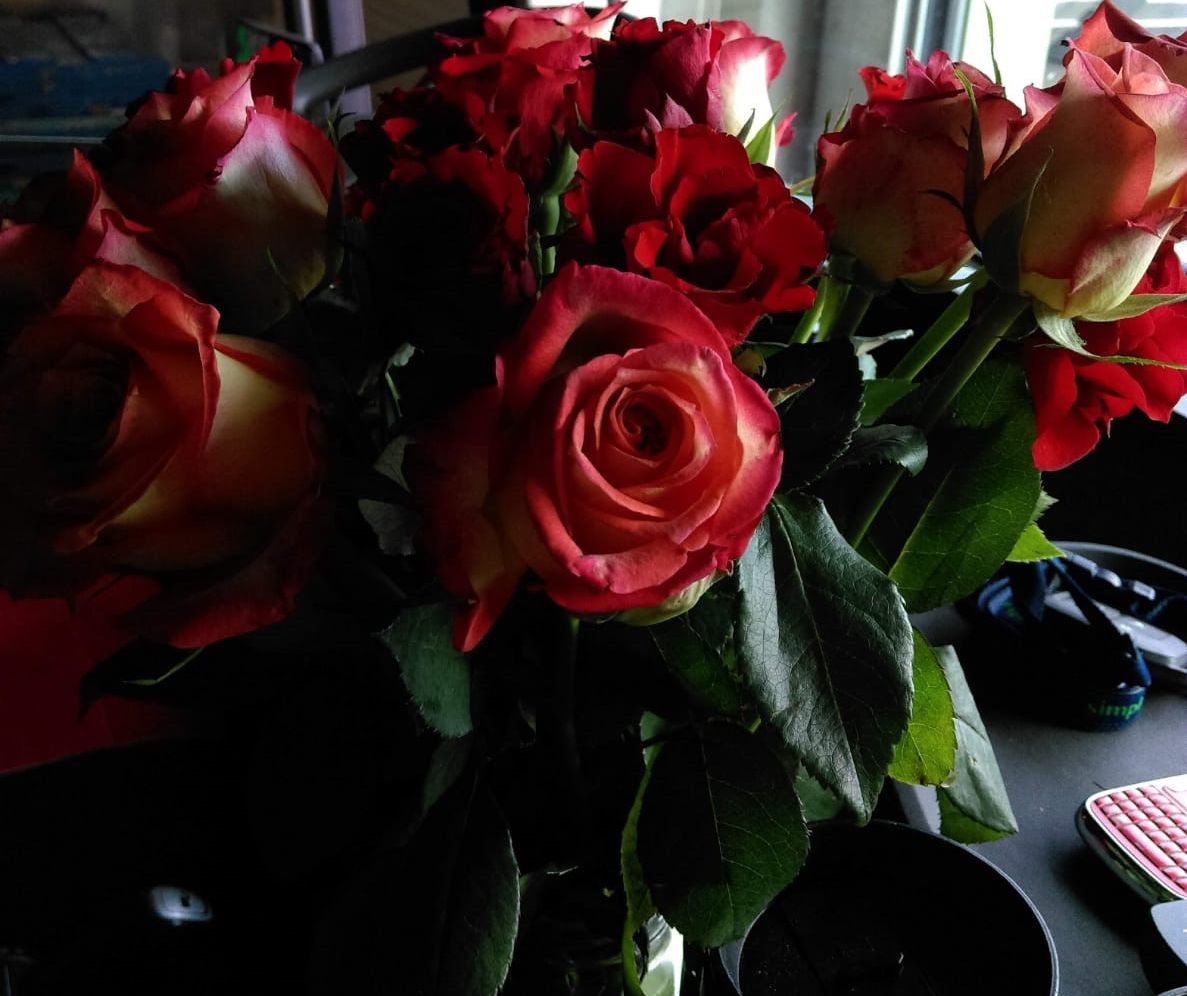 Meanwhile, parents have lost a lot of space. The driver’s cab is nearly 5 square meters. When Jerzy gets irritated and shouts behind the wheel, she can hear it. It is stressful when for example another driver shows you some insulting gesture or they keep you waiting at a warehouse for hours.

My husband is quick-tempered, but I’m tolerant. And a relationship requires great compromises. We have been 32 years together, we know what it means – says Anna. – We argue rarely.

(“Apologies are the best anyway” – adds Jerzy. He laughs quietly).

And Anna only briefly confirms that they cannot complain about hugging.

We have a bunk bed, but fortunately each one is 90 cm wide, and our size allows us to sometimes lay together on one. We have a place where we can hug each other – she adds.

They say that travel brings people closer and it has brought them closer to such an extent that they would probably not be able to live or work separately now. When they don’t see each other for an hour, for example, because Anna goes to the hairdresser after returning home, Jerzy rings and asks when she comes back.

Shared experiences also bring us closer. On one hand – each night under a different sky. On the other – dangerous situations – Anna remembers particularly well the scary nights in Belgium.

It was then that a gang of thieves, who put their victims to sleep with gas, was grabbing the parking lots. They stole everything – money, laptops, only sometimes they left documents behind the tractor. The Gawędas fastened the doors from the inside with load securing straps and hoped that if they fell asleep from the gas, they would wake up a little dizzy because of gas at most in the morning.

Anna also recalls one drive under a viaduct somewhere in the UK. It was five in the morning, and suddenly two stones thrown somewhere from above fell on the windshield. The glass broke, but it did not disintegrate. Who knows if she would have known it if Jerzy had been driving alone. Maybe he wouldn’t tell her to spare her nerves.

A big house – isn’t it ironic?

And they have a beautiful house now. – I’ve always dreamt of a big, spacious house, and now I have it – Anna laughs. For the time being, the most important part of this house is the bathroom (“Long baths with candle light after the return!”) and the laundry room.

It started with an automatic washing machine, now we have three of them there and a clothes dryer. I wash similar colors together, and then I dry similar fabrics together. After returning from the route there are so many things to wash that it took the whole night. Now I can do one washing cycle instead of three – she explains.

It’s a little ironic that a dream big house is usually empty. Or it gets colonized by some food left by mistake.

Once we forgot about potatoes that were cooked. When we returned after a couple of weeks, they were already getting out of the pot – she recalls.

Pressure cooker, thermocooker, Thermomix, bread baking machine – all this works for several dozen hours after they return from the route. Preparing them for another trip. Anna will enjoy this fully when she retires, although she doesn’t think about it for the time being, because it’s about 10 years of work left.

For the time being, she cooks on one square meter. Her husband is installing straps on the trailer, and she is defrosting the broth. Above her head hangs her calendar, because she is responsible for planning, documents and bills. Above his head is a TV. No family photos, there is no place. There are pots, pans, books, wash bags with favourite cosmetics. A make-up magnifying mirror. On February 14th a vase with flowers will appear in the mug recess. They always carry the vase in a glove compartment for various occasions.

Sadly, recently they had to get rid of their coffee machine because the boss banned it. And it was a good coffee machine! It brewed decent, Italian-style coffee. Now Jerzy, who usually gets up earlier, makes ordinary coffee. He turns towards her with the hot drink, and all she needs to do is to reach it with her hand. The coffee is not as good as the one from the machine but after all, it is a coffee served to bed.