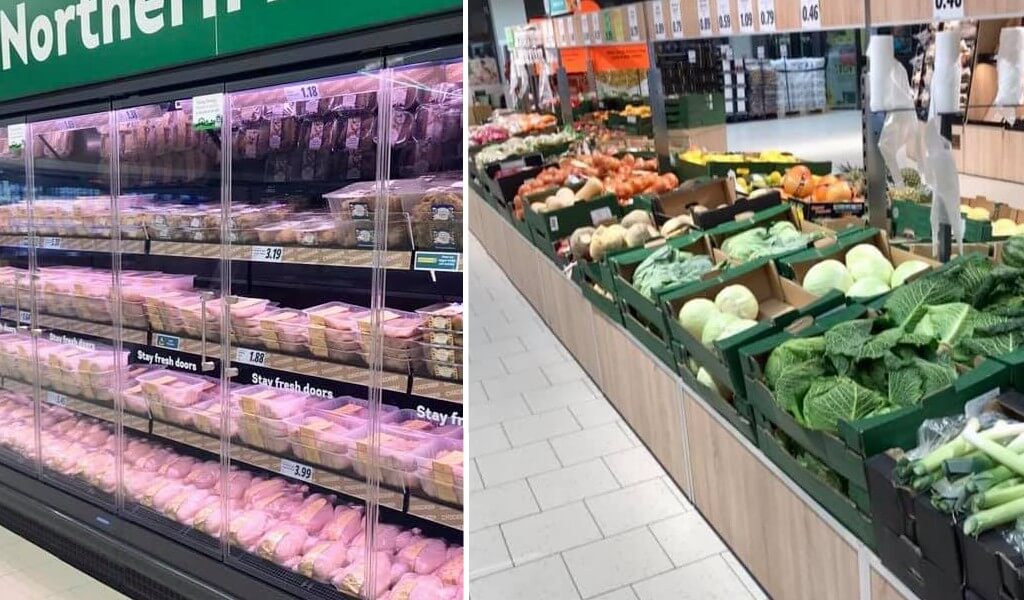 Since Great Britain left the EU single market on January 1st, there have been shortages of some fresh products in supermarkets in Northern Ireland. However, Lidl claim they have been able to offer a „full product range” thanks to the tweaks it’s made to its supply chain.

On Friday, Lidl Northern Ireland took to Facebook to post pictures of one of its fully stocked branches, and also thank both their suppliers and hauliers.

In a statement, the German supermarket chain said they did not have any significant supply chain issues related to Brexit, partly thanks to its decision to work with over 50 local Northern Irish suppliers.

Over the past two years, we’ve implemented a Brexit preparation process for our supplier network to enable them to prepare for all Brexit outcomes. Alongside this we’ve worked closely with our 50+ local Northern Irish suppliers who supply our everyday range, which makes up more than £290 million worth of produce in the region annually! This advanced local sourcing network and detailed preparation has meant that we do not have any significant supply issues in relation to Brexit at present, and as such we are confident that our customers will be able to continue to shop all of their trusted Lidl products in our stores across the region.

Lidl also have a network of suppliers across Europe that they can tap into, and as Northern Ireland is not subject to customs checks, these goods can flow freely into its stores from anywhere in the EU.

In a similar move, British supermarket chain Sainsbury’s revealed earlier this month that it was temporarily stocking 70 Spar-branded products due to a lack of clarity on border arrangements.

When asked as to why the supermarket was stocking items with the branding of one of their competitors, a Sainsbury’s spokesperson said:

A small number of our products are temporarily unavailable for our customers in Northern Ireland while border arrangements are confirmed. We were prepared for this and so our customers will find a wide range of alternative products in our stores in the meantime and we are working hard to get back to our full, usual range soon.

Other supermarkets have nonetheless run into problems. The same is true of some supermarkets in the Republic of Ireland too.

Ken Murphy, CEO of Tesco, told RSVP Live on Saturday that „teething issues” were the reason behind the „limited disruption” to their supply chain:

We have seen some limited disruption into the Republic of Ireland and into the north of Ireland, but we’re working very closely with the government on both sides of the Irish Sea to smooth the flow of product. Inevitably there are bedding-in issues, teething issues, that you would expect with any new process that’s been set up at relatively short notice. We’re working our way through those and we would hope over the coming weeks and months that we will end up with a much smoother flow of product.

Meanwhile, both Aldi and Lidl have told the Irish Mirror that they were not experiencing supply chain issues at their stores in the Republic Ireland.

Along with our robust and agile supply chain and logistics network that can quickly scale up to increased demand, we have also been downsizing our reliance on the mainland UK landbridge for quite some time, as well as planning alternative haulier routes in anticipation of Brexit. Therefore, we have the measures in place to ensure that we are protected from the many challenges associated with Brexit. We work with more than 260 local Irish suppliers and had implemented a successful Brexit preparation process for our supplier network to enable them to prepare for Brexit.