BAG controllers do not warn the drivers who do not follow the weekly rest in the cabin ban anymore but fine them. The transitional period during which the German officials did not fine those who do not comply with the rules ended in September. Some time ago German media published a story in which a Lithuanian driver brought the BAG officials down a peg.

Truck drivers who spend the full weekly rest in the cabin should expect a fine in the amount of 500 euro in Germany. Also the employers are punished for not complying with the rule which entered into force on 25th of May this year. The fine is much stricter as it amounts to 1500 euro.

The ban has been criticised by some German entrepreneurs. They believe that this is cutting the branch on which the German economy is sitting. Industry media quite rightly noticed the limited options to enforce this provision.

According to Gerhard Grünig, Chief Editor of the verkehrsrundschau.de website, the new rules will not bring the desired effects for two reasons. Firstly, they are „only national” and not EU regulations, and secondly it is impossible to conduct inspections in this regard. The editor-in-chief says that BAG currently employs 240 inspectors who are already stretched out thin due to all their tasks.

There is no point in such an initiative and they should wait for a reasonable solution for the problem in the form of the EU provisions – suggests Grünig.

Some time ago a German transport industry website eurotransport.de described a short story which happened over the weekend at one of the Inns by the A4 motorway in Germany (Raststätte Aachener Land Süd). BAG officials were supposed to carry out an inspection there with regard to the ban introduced this year. They noticed a Lithuanian truck with the tarpaulin of a German transport company. Clothes were bring dried under the open hood of the Actros truck. It’s not the first time that the vehicle was noticed by the inspectors. The officials decided to discuss what to do. In the meantime the Lithuanian driver noticed them, closed the curtains, closed the door and disappeared.

He didn’t come back until the night and the inspectors had to leave empty-handed. Eurotransport.de stresses that the actions of the BAG officials are somewhat limited. Will there be any repercussions for the driver for the „escape”?

BAG explains when they can punish the driver

According to the current information from the BAG office, the driver can do what they want with their time, therefore the trucker from Lithuania should not be punished unless he was caught sleeping in the cabin.

Recently, BAG explained that in accordance with Article 4 letter f) of the Regulation (EC) No. 561/2006 the driver can freely make use of their time.

Thus it is their decision whether they spend time in their vehicles or by their vehicles as long as they do not sleep in the vehicle but in a place with adequate sleeping conditions.” – writes BAG.

Switzerland to join EU in banning... 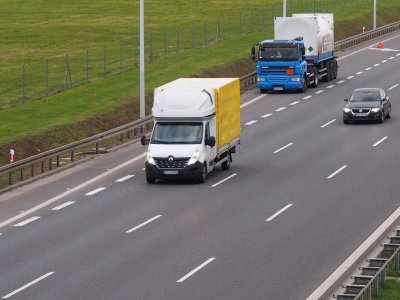 New ban on light transport in...