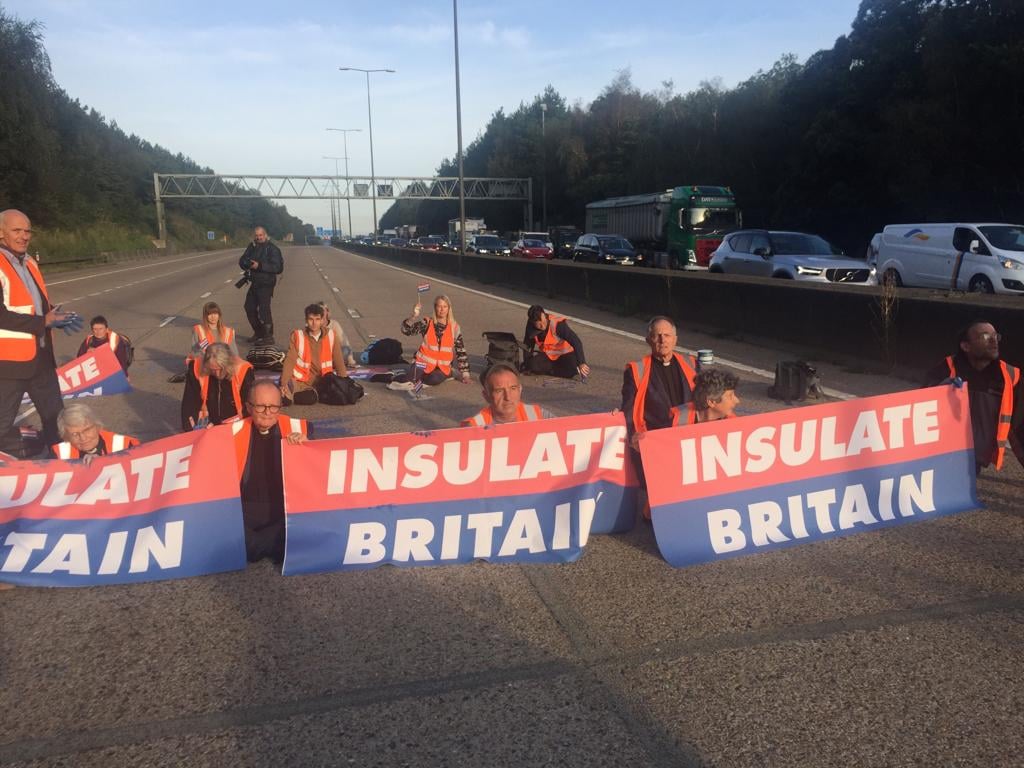 We introduce you to our live coverage of the resulting traffic difficulties caused by Insulate Britain protests in and around the M25 and beyond.

Katie Barnfield of Sky News has confirmed that police officers have successfully removed Insulate Britain protesters on the A40, allowing for the road to reopen.

The #A40 has just reopened after police successfully removed the @InsulateLove protestors. They have also just removed these two ladies from the cycle path next to it. Officers are telling me this part of the protest is now clear @SkyNews pic.twitter.com/OftWlecasA

Protester says he “hates” having to block roads, but claims he has no choice

A retired doctor has been filmed explaining his motivations for taking part in today’s protests. The 77-year-old, who was covered ink that had reportedly been hurled at hit him by angry motorists, told Greatest Hits Radio London News that he had to do something due to government inaction:

77-year-old Christian says “of course” he’s worried about being hurt, but feels he has to act. #InsulateBritain pic.twitter.com/5KcMHa5oj1

Footage shows Waberer’s trucker being blocked by protesters in Dartford

Breaking: #insulatebritain block a second roundabout on the south of the Dartford Crossing in Kent @BBCNews pic.twitter.com/oHJ0a5pSY6

Fourteen people have been arrested after traffic on the A206 at Crossways Boulevard, Greenhithe, was obstructed in both directions.

At around 8.05am on Wednesday 27 October 2021, we received a report that a group of protestors had gathered at the location and some of those involved had glued themselves to the road surface, or each other.

Officers attend the scene within minutes and by 8.30am traffic was flowing in both directions.

Each of the individuals was arrested on suspicion of obstructing a highway and conspiracy to commit public nuisance. They remain in custody as enquiries continue.

Motorists are advised to expect delays and to use an alternative route if possible.

Fourteen people have been arrested after we received a report of protestors obstructing Crossways Boulevard in #Greenhithe.

They remain in custody as enquiries continuehttps://t.co/flc816uKN1

A photo from Highways England’s CCTV footage shows the disruption caused by protesters on the A40 at approximately 08.15 GMT this morning:

“We’re here again”#insulatebritain are back on the roads by the M25 dartford crossing in Kent. pic.twitter.com/QRJVqo9KoQ

Protesters disrupt traffic on A206 Bob Dunn Way near the M25

According to Kent Online, Police were called to the scene shortly after 8am where people were seen sitting down in front of queuing traffic and had glued themselves to the road surface.

Officers say they have arrested 14 people obstructing the A206 in both directions.

Starting from 7am on the morning of Wednesday, October 27, the M25 will become a place of nonviolent civil resistance to stop our government committing crimes against humanity

This government, our government, is actively pursuing policies that will lead to the destruction of our country due to climate catastrophe.

Insulate Britain acknowledges the inconvenience and irritation we are causing to the public in our campaign, we ask that you understand that the days of disruption are necessary to force a government to fulfil its most basic of duties to protect and defend its people.

Angry bystander takes on protestors in front of the police

BREAKING: police having to calm angry drivers at the Dartford crossing right now as they are try to remove #InsulateBritain protestors from M25 sliproad pic.twitter.com/tm40sOQU5m

Insulate Britain has blocked part of the A40 in West London and a roundabout in Dartford this morning after declaring the M25 a site of nonviolent civil resistance yesterday. We are demanding that the government gets on with the job of insulating Britain’s homes, starting with the homes of the poorest people in the country. This is the fifteenth time that Insulate Britain has caused disruption on motorways and A roads as part of our campaign of nonviolent civil resistance over the past six weeks. So far, 146 people have taken part in the campaign and there have been 690 arrests.

There are also reports of a blockade on the A40 in west London.

#InsulateBritain protesters have blocked the #A40 in west London. Some have superglued their hands to the road. Angry motorists can be heard shouting abuse, perhaps further incensed by police who are present and watching proceedings pic.twitter.com/H8ymeyg0Wp

There are already reports of Insulate Britain protests taking place near the M25.

Yesterday evening, the protest group declared the M25 motorway as a “site of non-violent civil resistance”.

In a statement justifying the actions it shall carry out today, Insulate Britain said:

In light of a national injunction covering England’s highways, Insulate Britain has declared the M25 a site of nonviolent civil resistance and called for motorway traffic to be slowed. You can’t imprison a flood, there are no unlimited fines against a famine, you can’t bankrupt a fire. You can imprison the ordinary people of Britain, yet the lives of our children and those of all future generations hang in the balance…