Two Lithuanian journalists whose investigative work resulted in the creation of the hard-hitting documentary film “Lorry Slaves" have received a prestigious award for their work. 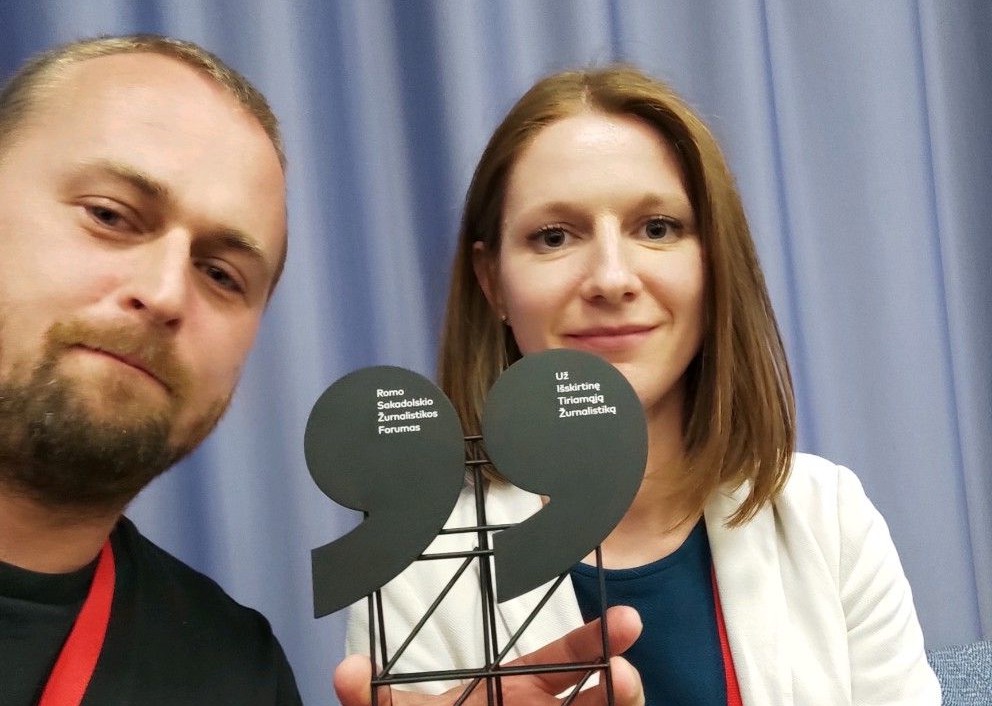 The duo, Dovydas Pancerovas and Birutė Davidonytė, were given the Romas Sakadolskis award for investigative journalism during a ceremony at Vilnius TV Tower on Thursday.

The award is named after renowned Lithuanian journalist Romas Sakadolskis, whose “The Voice of America” radio show broke through the Iron Curtain during the Soviet era.

Writing on LinkedIn, Pancerovas said it was an honour to receive the award:

It is a real honour to receive the prize under the name of Romas Sakadolskis, because he was a man for our generation who showed western values of journalism.

Davidonytė also took to LinkedIn to say it was an honour to receive the award:

It is a really great honor for me, because R. Sakadolskis was a lecturer of both of us, undoubtedly one of the most beloved teachers. Even to this day, I remember many of his thoughts on journalistic ethics that he passed onto us when we were still very young journalism students. In fact, R. Sakadolskis talked to us about investigative journalism even in the days when the university was said that it was not available in Lithuania, and therefore such lectures were not very necessary.

We are happy with journalists Birute Davidonyte and David Pancerov! The documentary “Lorry Slaves” received a lot of attention, and not only in Lithuania. The journalists have been awarded the Romas Sakadolski Prize for investigative journalism. The documentary helped reveal the problems of the transport sector that we are working with a daily basis. We hope that this investigation and further our work will defend drivers rights. P.S. we are still waiting for more active government intervention. The problem is really serious… We think there will be another documentary on this topic… We will not stop.

For the benefit of those unfamiliar with the documentary, the 2-hour film, produced by LaisvėsTV, contains evidence and horrific driver testimonies that point towards the disgusting maltreatment of 3rd-country nationals working for major Lithuanian hauliers.

The documentary accuses the likes of Girteka, Hoptrans, Hegelmann Lithuania, Meidovis, Transporto Marisa, Vlantana, Baltic Transline and Kamia of malpractices that show a total disregard for employee wellbeing and safety, not to mention labour laws. However, in pretty much each and every case, the aforementioned road transport and logistics companies’ have rejected the claims completely.

You read more about the film via this article from our archives. You can also watch it in full with English subtitles via YouTube.