Some 6 days after the fire on the Euroferry Olympia broke out, rescue workers are still grappling with extreme temperatures and toxic gases as they try to extinguish the fire and find the 10 missing persons who were not evacuated. Meanwhile, amid growing complaints from hauliers and drivers, Grimaldi Lines has defended the health and safety conditions on the EuroFerry Olympia, and denied accusations of overbooking. 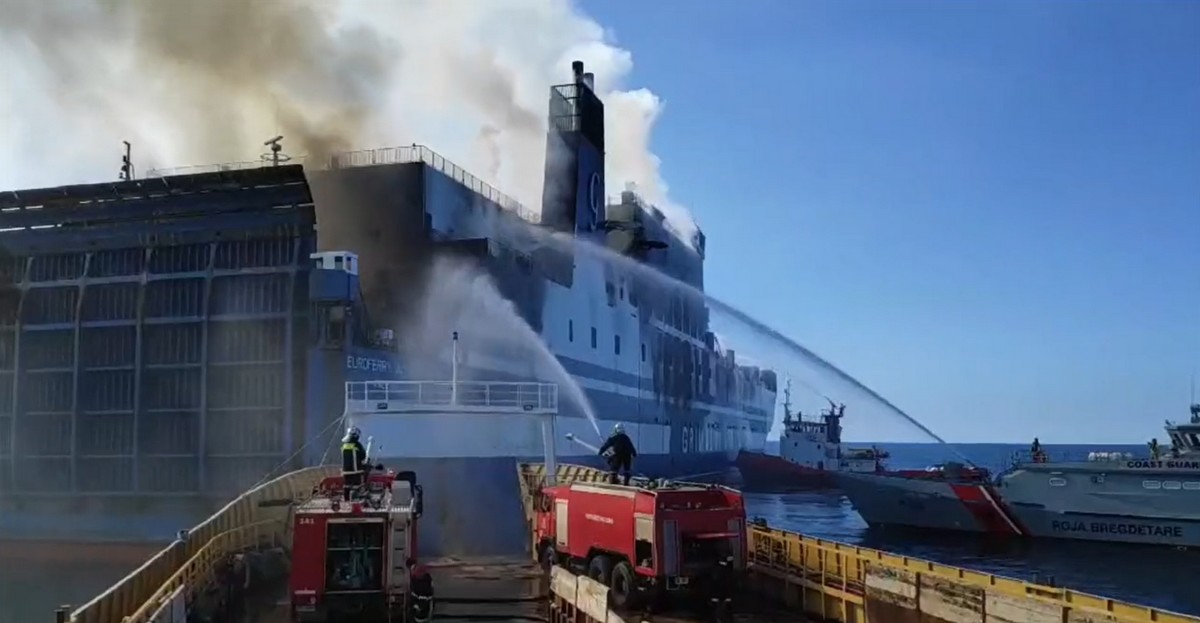 The latest update from the Greek media this morning confirmed that rescue workers and firefighters are having to deal with extremely high temperatures and toxic gases coming from the fire in one of the ship’s garages. According to Splash247, all of the ten persons who are missing are lorry drivers.

The latest footage shared by the Greek fire brigade gives you an idea of what the scene is like onboard the ferry:

Meanwhile, the war of words between hauliers, lorry drivers and Grimaldi Lines has not died down as accusations continue to fly.

Yesterday, we revealed how a number of drivers and hauliers from Greece and Bulgaria had expressed strong criticism of the conditions onboard the Euroferry Olympia. Among the issues raised were how trucks are parked so closely next to one another, and the cleanliness of the rooms.

Similar accusations were made by Greece’s Federation of International Truck Owners at the weekend, prompting an official response from Grimaldi Lines.  In a statement, the Napoli-based ferry operator denied the allegations about the poor standard of cleanliness on the Euroferry Olympia:

“Like other vessels of the Grimaldi Group, the Euroferry Olympia undergoes regular cleaning and sanitation of both cabins and common areas while maintenance works are commonplace. The good conditions of the vessel were, in fact, confirmed last 16th of February in Igoumenitsa, where the Euroferry Olympia underwent a Port State Control inspection (smoke detection and firefighting systems included) by Greek authorities, which ended with satisfactory results.”

Regarding the suggestion that many truckers stayed in their cabins during last Friday’s sailing, the company maintained that it checks the garage area to ensure that lorry drivers do not stay in their cabins after ferries set sail. At the same time, it said lorry drivers who hide in their cabs to avoid detection are endangering the safety of themselves and others.

“With regards to allegations by SEOFAE of an overbooking of the Euroferry Olympia in Igoumenitsa on the night of the 18th of February, this is another inaccurate statement, as the electronic booking system (for freight and passengers) of the Grimaldi Group does not allow any overbooking. In the particular case of passengers, only 42% of the passenger capacity was occupied during the voyage of the Euroferry Olympia of last 18th of February.”

Apostolos Kenanidis, President of Greece’s Federation of International Truck Owners (OFAE), has since hit back at Grimaldi Lines’ statement.

He told efsyn.gr that “drivers are not hiding in their trucks”, but simply choosing to stay wherever they will get the best rest before embarking on their next journey. He then added: “Even tourists sleep in their caravans in the summer. What do you think drivers will do when faced with such situations?”

The OFAE President also referred to some of the rooms on the vessel as “miserable”, citing issues with poor ventilation, high temperatures, dirt and bad smells. Continuing his criticism, Kenanidis doubled down on his claim truckers were being edged out of rooms to make way for tourists – alleging that some were even blackmailed into giving up their cabin.

Moreover, in recent days, evidence has been mounting to support the opinions of the lorry drivers.

In the efsyn.gr article linked to above, photos said to have been taken on a Grimaldi Lines vessel show just how closely the trucks are parked. Another image reveals how truckers crashed out for the night on makeshift mattresses that lay on the floor of an open area of the ferry.

In addition, this morning, Greek news website tanea.gr wrote that drivers working for one international haulier had pleaded with their employer not to book them onto the Euroferry Olympia. It is said the truckers were deeply unhappy with the poor condition of the vessel, with one illustrating via his smartphone photos how he had been “eaten” by bugs present inside his room and bed. This doesn’t appear to be a one-off either; yesterday Templar European Logistics said one of its staff had been “eaten alive by bugs on the Ancona Patras boat”, which is also operated by Grimaldi .

On top of that, a lawyer representing a transport company who had used Grimaldi Lines is quoted by tanea.gr as saying that drivers often called the Euroferry Olympia a “zoo”.

He isn’t the only lawyer looking into the case either. As tvxs.gr writes, Giannis Marakakis, who represents the family of the lorry driver whose body was found on the ship, plans to sue Grimaldi Lines, seeking damages as well as the criminal prosecution of those responsible for the tragedy. In a statement, the lawyer said that the “unacceptable service” of Grimaldi Lines had contributed to drivers deciding to stay in their cabs.