Amid the driver shortage and the general crisis of supply chains in the UK, plans for a roadside services facility on the A9 motorway near Dunblane in Scotland have been rejected by Stirling councillors due to “road safety concerns". The services would have had provided safe parking for 50 HGVs. 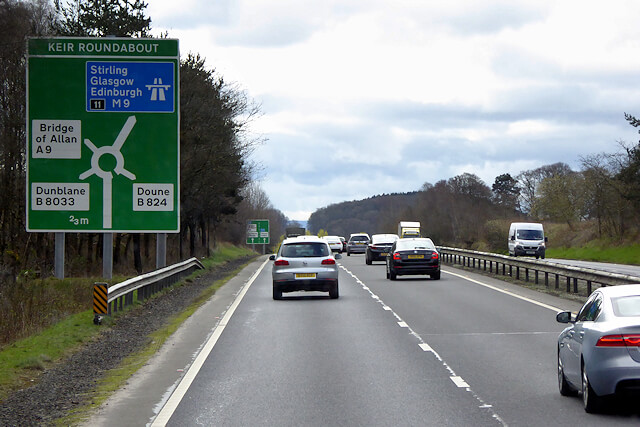 The plan to build a Dunblane motorway services on the A9 was rejected by Stirling councillors yesterday – just a year after it was conditionally approved.

Last August, Stirling Council’s planning panel approved GB Grove Ltd’s application for a filling station, HGV truck stop and amenity building complete with a rest area, toilet and shower facilities, as well as two units for use as a cafe and/or restaurant. However, a legal challenge was lodged against the decision, reports the Daily Record.

The proposal was returned to the council this month for consideration, but yesterday it was refused with 99 objections. Local Dunblane Community Council was one of those who objected to the plan.

According to the Daily Record’s article, BP had already committed to operating a fuel station at the services. Apart from the petrol station, 58 electric charging points would have been built and 50 HGVs could have parked there safely.

The main reason for the objection was road safety and the services’ potential impact on local businesses. One of the objectors, Jo McDonald, said the area was already the most dangerous stretch of the A9 between Stirling and Dunkeld.

Meanwhile, a senior industry source has told The Telegraph that luxury lorry parks are being considered by the UK Government to lure more people into driving lorries.

The lack of HGV parks in the UK has been an issue for a long time, but little has been done about the problem.

Nevertheless, the recent driver shortage and the general crisis in the supply chain has put things in a different light. A 2018 survey by the Department of Transport stated there is a need for 3,700  parking spaces for lorries in the UK. The lack of lorry parks forces drivers to sleep in lay-bys and industrial estates, which is not safe for either the driver or the load. Naturally, it doesn’t add much charm to the profession either.

The need for HGV parks is obvious, and some “luxury parks” may interest drivers. It nonetheless remains to be seen what “luxury” actually means when it comes to the plans for the lorry parks.