The Amazon network includes over one hundred logistics centres worldwide, of which over thirty are located in the European Union countries. The newly opened logistics-distribution centre of the American giant in Kołbaskowo is located about 12 km from the centre of Szczecin and only 230 km from the A6 motorway junction. The warehouse has more than 160 thousand square metres of surface. The company has implemented 3 thousand robots there, which help the workers.

Amazon in Kołbaskowo in the latest investment of the logistics leader. The e-commerce centre is an object located on a nearly 30-hectare plot.

Each Amazon centre has its own specialisation,” explains Marzena Więckowska, senior PR manager for Central and Eastern Europe at Amazon.

The Kołbaskowo centre will be operating in the area of storing and shipping small-dimension deliveries, e.g. books and small electronic appliances.

The investment is the fourth project in a row built for Amazon by Panattoni Europe. The object is 17 m high and the developer built 7.8 km of roads for the purposes of the projects, including a biscuit-shaped roundabout. It was created on the Kołbaskowo junction, at the exit from the A6 motorway from the east.

Poland at the forefront of robotisation

Automation rules in Kołbaskowo. No other company in Poland has so many automated devices—for each staff member, there is more than one robot. The Amazon Robotics technology has been implemented in the centre. It allows for storing up to 50 percent more goods and much faster order processing. Due to streamlining of the processes, the execution time of individual orders is already counted not in hours, but in minutes.

Poles, as one of the first in the world and the first in Europe, began working with the Amazon Robotics technology over two years ago when the Wrocław e-commerce logistics centre received the robots.

In Wrocław, there are over 260 robots weighing 332 kg, which are able to carry a shelf of 1.3 t, and the Polish warehouse was one of the first in the world where such a transport was tested. Now, this solution has been applied in Kołbaskowo on a larger scale. 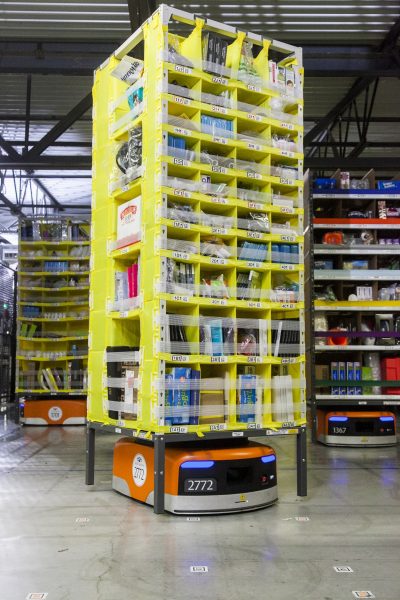 How does it work? Thanks to an advanced IT system, a robot first chooses the proper shelf where the needed products are located and then, it raises the shelf and drives to the relevant picking position. After an employee has taken the needed product, the robot drives away and puts the shelf back. At the same time, other robots with shelves line up in a queue at the picking positions. Such solutions eliminate the time needed by the employees to search for products in shelves, which accelerates the order execution.

A special algorithm used in the system allows robots to choose the shortest route to the shelf and picking position and to put shelves with the most often ordered products so they are located closest to those positions.

The beginning of robotisation in Amazon was 2012 when the company acquired, for almost USD 800 million, Kiva Systems, a robotics company. Kiva specialised in improving the process of packaging and completing shipments in large warehouses.

A single Kiva robot is over 40 cm high and weights 145 kg. It can move shipments with a speed of up to 8 km/h. Amazon also uses another devices, e.g. robotics arms which are able to move large pallets of goods. 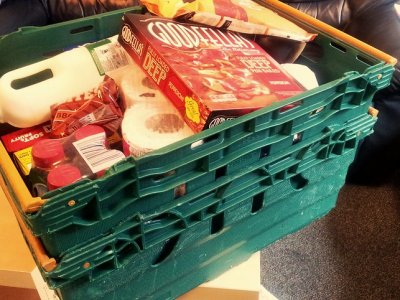