Revealed: the highest offenders of drivers’ hours rules in Britain

New figures published last week by the DVSA have revealed that foreign hauliers are responsible for the overwhelming majority of drivers' hours rules violations in Britain. Spanish road transport companies were the worst offenders in 2020, followed by their counterparts in Romania and Poland. 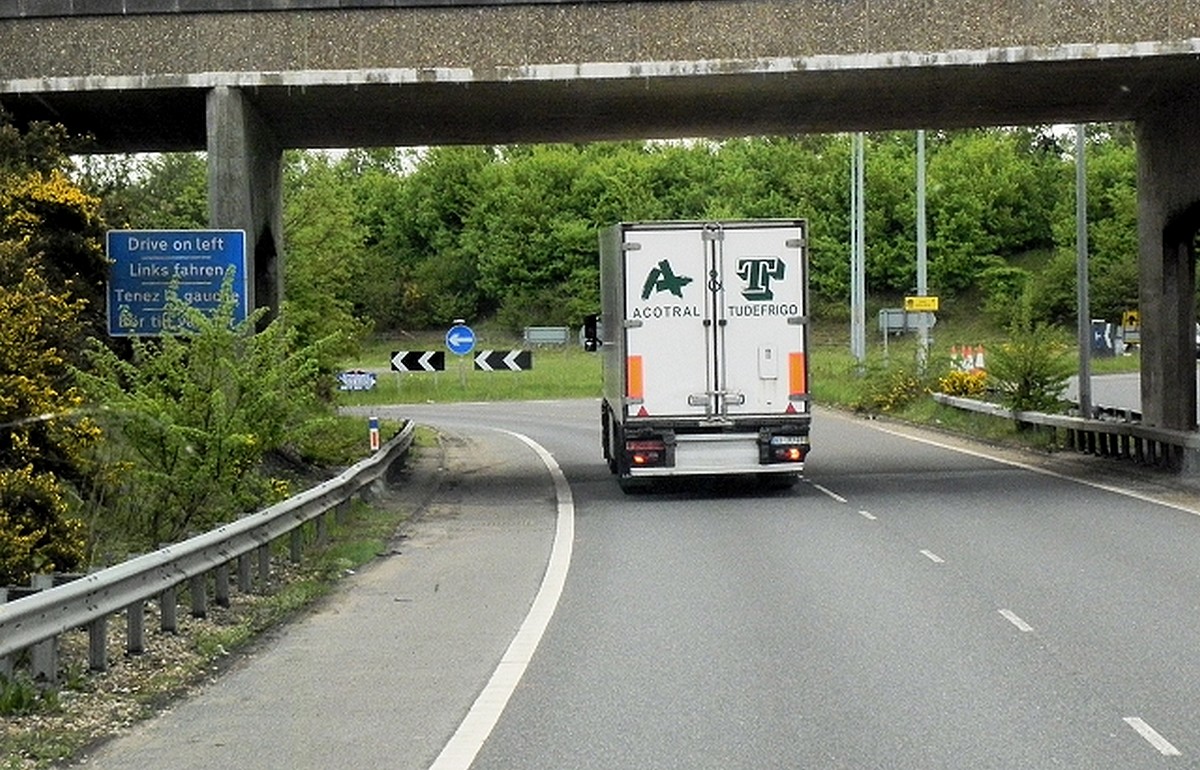 The data, released by the DVSA on November 19th, includes a massive list of all the recorded drivers’ hours violations in 2020. For each violation, the company responsible is listed along with the firm’s country of origin.

The figures only show offences detected at the roadside; the data does not include violations recorded during visits to operator sites or on desk-based assessments.

Having analysed and summed up the data, Trans.INFO can confirm the hypothesis that many British hauliers and lorry drivers have long held: the overwhelming majority of companies who break drivers’ hours rules in Britain are from outwith the UK.

In 2020, there were 3,722 recorded violations of drivers’ hours rules in Britain by hauliers registered in the UK. By comparison, foreign haulage companies were responsible for 21,156 violations. Of that number, companies from Spain, Romania, Poland made up almost 50%.

Technically speaking, the most number of violations were recorded by UK hauliers. Even so, despite the fact that British hauliers are responsible for the vast majority of freight transports in the country – that figure is only around 100 more than Spain. Indeed, UK registered road transport companies only make up 15% of the total recorded driver’s hours violations.

As we referred to earlier, Spain, Poland and Romania were the most frequent offenders according to the DVSA figures. Other countries with a notable number of violations were Bulgaria, Lithuania, the Netherlands and Portugal.

Of course, when looking at the numbers, it’s important to take onboard the amount of journeys hauliers from the respective countries will make into and around the UK. Spanish road transport companies, for example, regularly transport fresh fruit and vegetables from their country into the EU. Meanwhile, haulage firms from Central European countries remain an attractive low-cost option for firms in the UK looking to get items from continental Europe transported to them.

Therefore, further analysis is required to determine what percentage of each country’s haulage sector is breaching drivers’ hours rules in Britain. 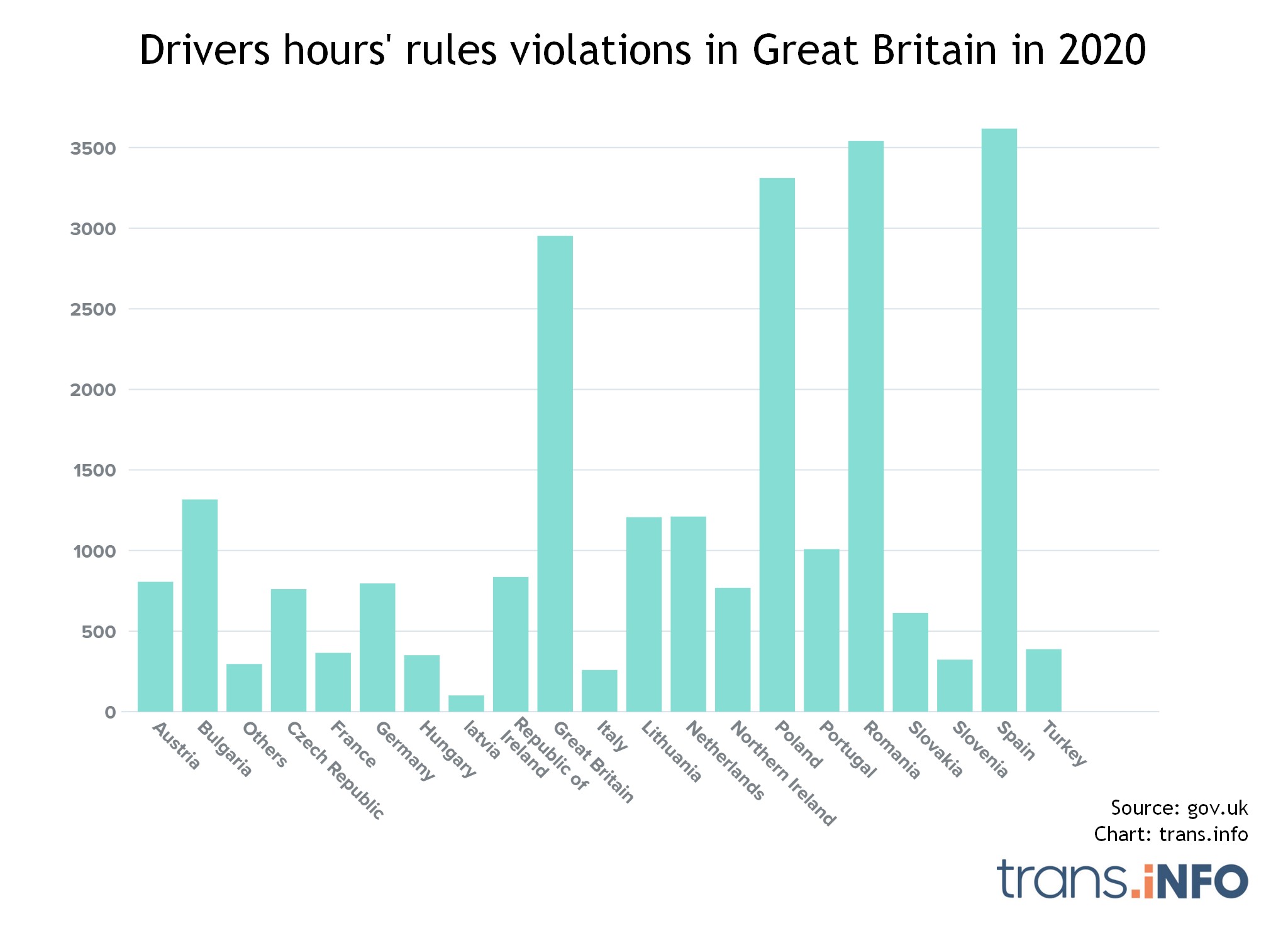 The DVSA figures also mention the companies who were guilty of breaking drivers’ hours rules.

However, as many international haulage and logistics firms have several subsidiaries and sister companies, it’s difficult to tell to what extent drivers from some of the big names have broken the rules either voluntarily or by pressure from their employers (something we’ll get to later).

Having scoured through the data, we were able to identify 9 road transport companies who had amassed over 100 violations of drivers’ hours rules in Britain in 2020.

The largest offender (although again we stress that this does not take into account subsidiaries and sister companies) was Romania’s Carrion Expedition with 386 violations. This figure shows that the company broke drivers’ hours rules in Britain in 2020 on average at least once every single day. 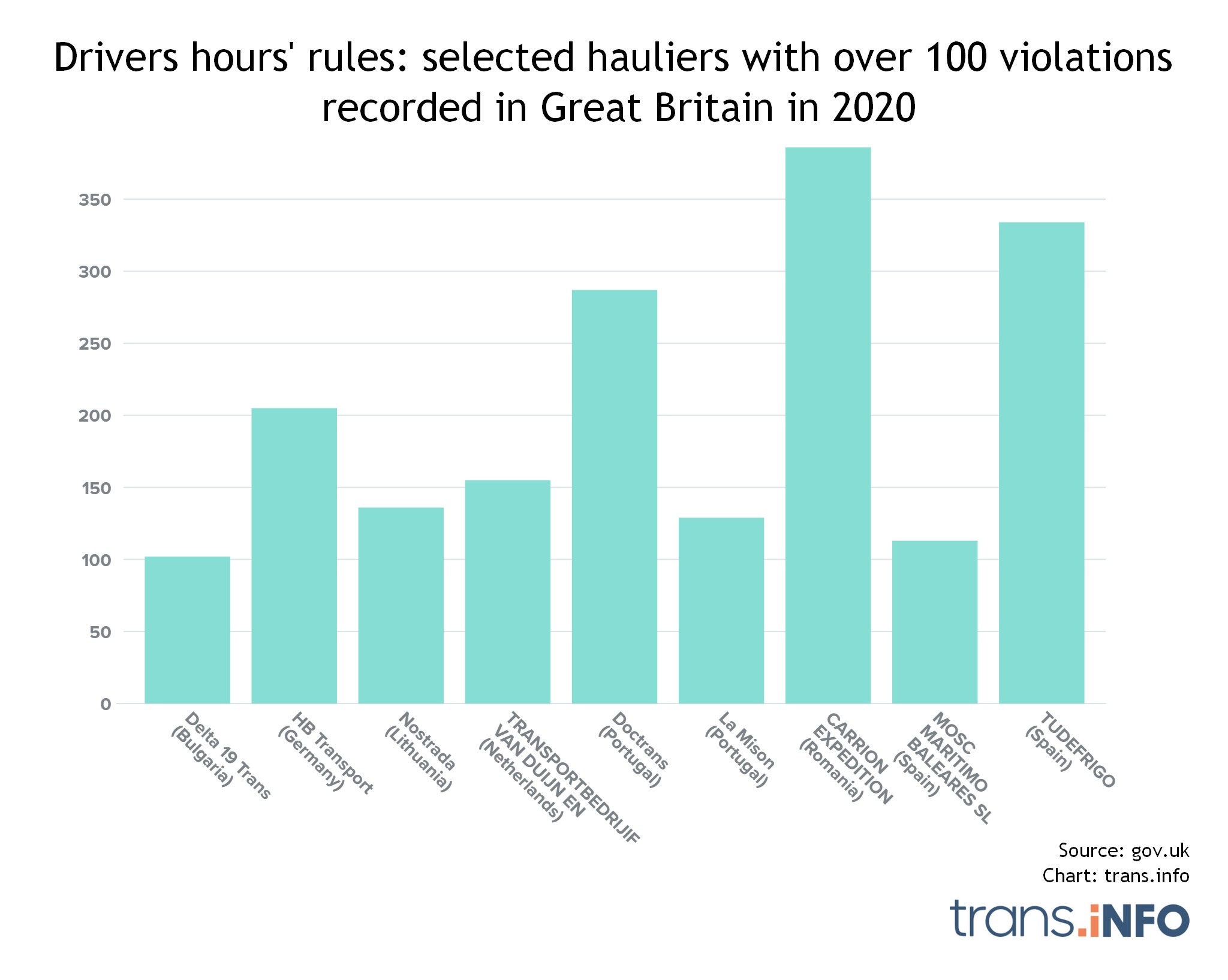 Having seen the data above, perhaps some of our readers may be wondering about the absence of a certain Lithuanian haulage giant.

If you read the entire document from the DVSA, you will see that there is no reference whatsoever to Girteka Logistics. It appears this could be because each of the violations the company recorded where registered under the names of its associate companies.

Having cross referenced the DVSA data with a Lithuanian business registration database, Trans.INFO has found at least 6 companies registered under the names of Girteka Logistics staff that were mentioned in the document. Together, the businesses were responsible for 291 violations of drivers’ hours rules in Britain in 2020.

Another company guilty of 38 such violations was ME transportas, registered under the name of Artūras Palijanskas (Head of Vilnius Transport Department at Girteka Logistics). Other firms registered under his name recorded violations as follows: TERMO trans (6) and Girmeta (18).

Naturally, there are many more road transport and logistics companies with complex business structures. As a result, it is difficult to put together a true picture of which companies’ drivers breach driving hours rules the most.

Photo: © Copyright David Dixon and licensed for reuse under this Creative Commons Licence