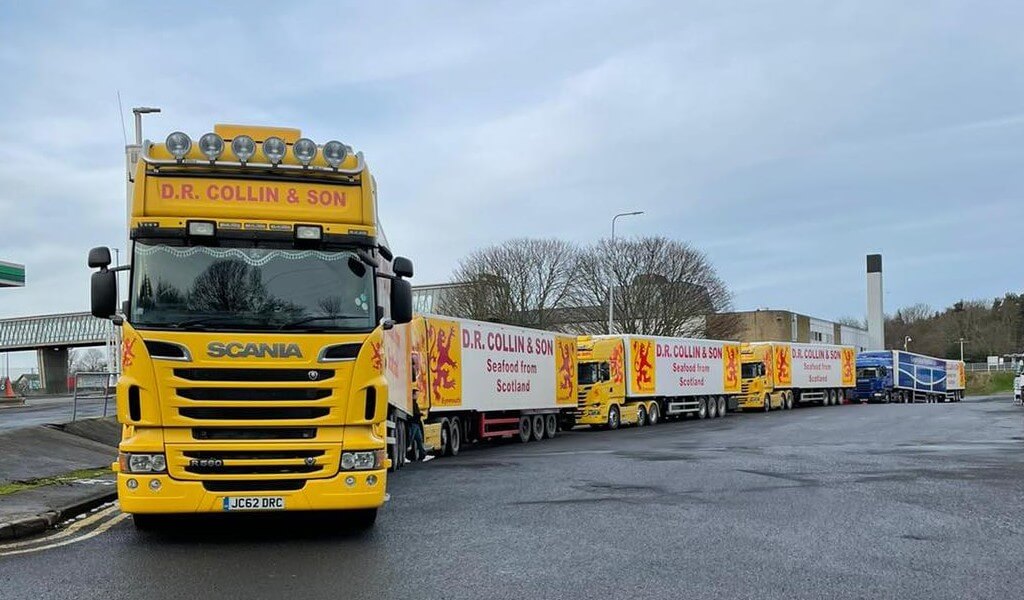 Rod McKenzie, Managing Director of Policy & Public Affairs at the Road Haulage Association, has said that the coronavirus crisis is allowing the UK Government to shrug off the present border chaos as „teething problems”.

McKenzie made the comments on Talk Radio yesterday morning, and gave a host of other stark warnings during his ten-minute appearance.

When asked about the current situation at the border, McKenzie’s first reaction was to stress that the coronavirus crisis is overshadowing what would normally be a top news story in a normal year.

The RHA Managing Director of Policy & Public Affairs then went on to say that businesses are having to deal with a „mountain of brand new red tape”.

The situation at Dover and at the Irish ports is the sort of thing that if the news agenda was different, at any other year, it would be right up at the top of the news. What we have is a chaotic situation which is deteriorating, based on a really small number of the usual amount of lorries that go over the channel and over the Irish Sea, to bring us goods, because everything we need comes on the back of a lorry. That flow is being disrupted at the moment by a mountain of brand new red tape, which was introduced when we left the EU on the first of January.

When quizzed further on the changes, McKenzie said that the extra layers of bureaucracy entailed by Brexit are „highly complex, and often contradictory”. He added that the customs officers people need to fill in the forms are both expensive and in short supply.

McKenzie also criticised the UK Government’s IT System, saying that it has not turned out to be fit for purpose, and even collapsed on Sunday.

The RHA director was then asked about what the UK Government was doing to solve the issues, or what they potentially could do. In reply, McKenzie criticised cabinet Minister Michael Gove for referring to the aforementioned issues as „teething problems”:

Well, the government have got luck on their side at the moment in a way, because people’s attention is diverted by COVID. And the pressure that we’re putting on government ministers, including Michael Gove, with whom we’re in touch with several times a week to do something, is able to be shrugged off as teething problems. But it’s not a teething problem if you’re the Scottish haulier who had a lorry load of fish which took five days to clear the border and arrive in France and its eventual destination, by which time it was off. And tens of thousands of pounds worth of fish was lost as a result. That is tragic. And the government is not currently being held to account on this because of other other pressures.

During the interview, McKenzie also revealed that Dover was only experiencing 40% of its normal truck flow, something that will eventually change, creating a „a dam which will burst”.

we’re not even seeing normal flows at the borders yet. We’ve got about 40% at Dover of what we would normally have at this time of year. Sooner or later, traders are going to have to try and send their things otherwise they’re out of business. And that’ll be a dam, and we’re looking at a dam now which will burst.

If those issues weren’t enough, the Managing Director of Policy & Public Affairs highlighted the UK driver shortage problem too, as well as the challenges hauliers are experiencing transporting goods from Great Britain to Northern Ireland and the Republic of Ireland.

Indeed, McKenzie even went as far as to say „I’m not exaggerating to say the island of Ireland will run out of food.”

McKenzie finished by saying that he thought „something really bad” would have to happen before the UK Government intervenes.

The RHA has since called on the UK Government to implement „urgent border and customs easements for several months to avoid trade chaos.”

According to the Financial Times, the British Ports Association has made similar calls.

Meanwhile, James Withers, CEO of Scotland Food and Drink, has just tweeted a picture of a deserted fish market in Peterhead.

What a sad sight. Europe’s biggest fish market in Peterhead like a ghost town. Built to deal with 10,000 boxes/day but with a few hundred.
Boats tied up, exporters crippled.
No Brexit image of lorry queues, it’s the sight of trade that isn’t moving at all. Pics via @will051266 pic.twitter.com/JLCYRCGh3P

Summing up his thoughts on the photo, Mr Withers wrote „No Brexit image of lorry queues, it’s the sight of trade that isn’t moving at all.”