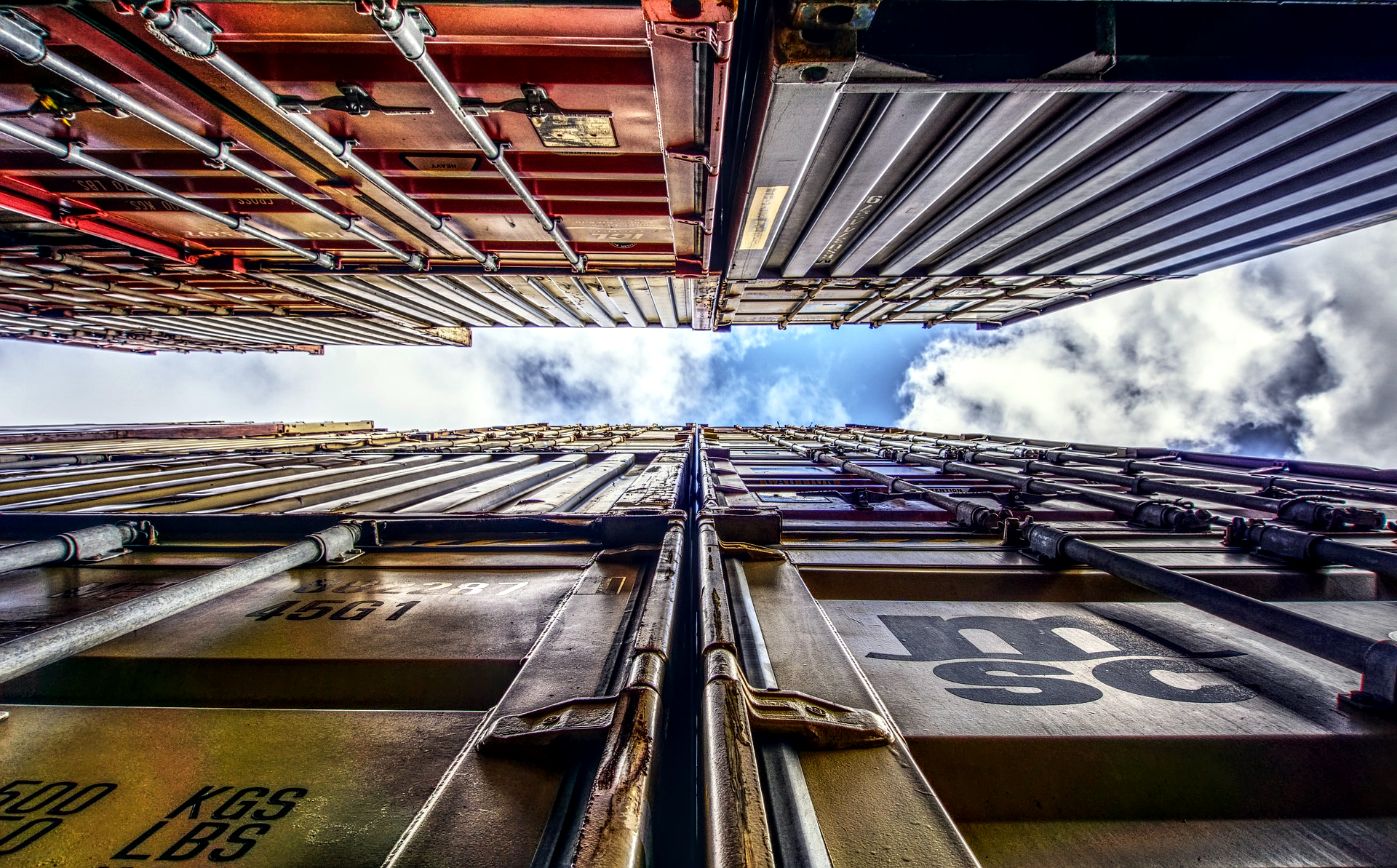 The idea of a large steel box that can be easily fitted on a trailer, lifted and put on a ship or train to transport cargo is so simple that one might think it is as old as transportation itself. But the shipping container as we know it today was born just 65 years ago. The invention simplified and shortened transportation processes and changed the world of logistics and transportation for good.

While it seems nearly unbelievable now, a universal container that could be used both on ships and lorries to make loading faster wasn’t used until the American entrepreneur Malcom McLean became fed up with the countless hours of waiting for cargo being unloaded to his truck. Mclean’s boredom and frustration sparked the very brainwave that changed the several thousand-year-old way ships were loaded and unloaded.

Of course, the concept of a box carrying items during transportation processes wasn’t new at all at this point. Even something very similar to shipping containers was used on trains. By 1926, European railway companies used huge wooden boxes to transport luxury passengers' baggage from London to Paris. These containers were loaded in London or Paris and carried to ports such as Dover and Calais on flat cars in the UK and “CIWL Pullman Golden Arrow Fourgon of CIWL” in France.

Nevertheless, for some reason, the idea of the universal use of such a box just didn’t spread any further during this time period.

The Port River and surrounds provide the setting for this busy wharf scene. Man and horse power are engaged in moving wagon loads of bags, casks and building materials whilst loading and unloading the vessels. In the foreground two steamers are moored at the wharf and the masts of many more can be seen in the distance. [On back of photograph] 'Queen’s Wharf, Port Adelaide / Before 1927

Before the invention of the shipping container, ships transported boxes, bales and crates in all shapes and sizes. Everything was handled piece by piece – basically by hand. This meant that both loading and unloading a ship took as long as a week. As we all know now, a ship only earns money when it’s at sea. Therefore, a week of waiting meant an incredible amount of money wasted. 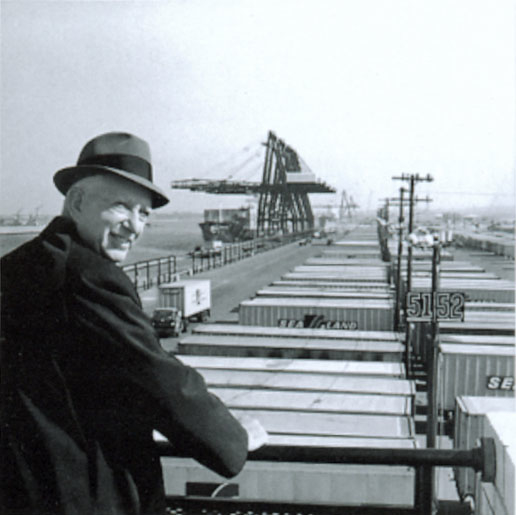 It was Malcom McLean who decided to attempt to normalise the use of the containers commercially in the early 1950s.

McLean had a road freight company at the time and wanted to find out a way to accelerate ship loading and unloading times. His first concept was what we now call RoRo – roll-on-roll-off transportation – when ships would have carried the lorries themselves. It surely would have saved many hours had it been implemented at the time, and by 1952, McLean was developing plans to carry his company’s vehicles on ships along the U.S. Atlantic coast from North Carolina to New York.

However, it soon became apparent that “trailerships” as they were called at the time, would be inefficient because of the large waste in potential cargo space on board the vessel.

Therefore, the original concept was modified so that just the containers would be loaded onto the ships – hence the term container ship or “box” ship. Mclean sold his transportation company and secured a bank loan to give the idea a go. His new company was named Sea-Land Corporation.

In January 1956, Mclean bought two World War II T-2 tankers, which he then converted to carry containers on and under deck. McLean also oversaw the construction of wooden shelter decks, known as Mechano decking. It took several months to refit the ships, as well as to construct the containers to carry on and below the vessels' decks. In addition, a trailer chassis had to be designed to allow removable containers.

Finally, on April 26th, 1956, the SS Ideal-X was loaded and ready to sail from the Port Newark-Elizabeth Marine Terminal in New Jersey to the Port of Houston in Texas. The vessel carried fifty-eight 35-foot (11 m) Trailer Vans, later called containers, along with a regular load of liquid tank cargo. The ship and the cargo arrived safe and sound to her destination, and a year later the second container ship started its route and established a regular service between New York, Florida and Texas.

After that maiden voyage, McLean’s container shipping business grew with more and more routes and bigger and bigger ships. Even so, the industry couldn’t change itself overnight – most ports didn’t have enough cranes to handle the containers, and port worker unions were against the new concept as it threatened jobs.

It took another 10 years to get to the point when the first container ship set sail in Europe. In April 1966, Sea-Land commenced services between New York and Rotterdam, Bremen and Grangemouth.

However, the real breakthrough came a year later, when the U.S. Government invited McLean’s company to start a container service to South Vietnam. The service produced 40% of the company’s revenue in 1968/69.

The standardization of shipping containers

By the time the Vietnam-order arrived, Sea-Land wasn’t the only company offering shipping container services. To secure the contract, McLean had to change his former 35-foot containers and find a size compatible with trains, lorries and ships.

Believing that standardization was the path to overall industry growth, McLean chose to make his patents available by issuing a royalty-free lease to the Industrial Organization for Standardization (ISO).

The advantages of container shipping: faster shipments and less losses from theft

The containership model offered important advantages to both shippers and steamship operators.

Freight was securely loaded in the trailers at the shipper’s factory with their doors sealed. Inside the box, the cargo remained secure while awaiting the ship that would transport it across the sea. The first person to open the cargo was either the customs officer or the client themself – a huge and vitally important change compared to breakbulk cargo, which could be more easily stripped.

Furthermore, because the containers were hoisted on and off the ship by swift gantry cranes, loading in the port, which was once were measured in days and weeks, was reduced to hours. This also meant that shipping times could be calculated better as loading times were easier to estimate.

Shipping containers as a driving force of globalization

In recent times, the modern shipping container has changed much more than the transportation industry. The invention has radically transformed supply chains, and in turn, domestic and international economies across the world.

Indeed, it has arguably changed the way we cook, dress, live and work.

90% of world trade goods are currently transported by sea. There are around 53,000 ships in the world’s commercial fleets, 5,000 of which are container ships. The largest of those carries more than 20,000 containers. Without these ships, many countries could not participate in global trade. Consumers would also have to absorb the increased costs – making the world poorer.

The container has also changed how countries interact with each other, creating conditions for global trade growth. Every component in a containerised system must work with all the others all over the world; the boxes themselves, their locks, the cranes, the ships, the dockyards, all have to match for the system to work.

By allowing the “intermodal” containers to move efficiently, not just from lorry to ship to train, but across borders, globalised trade could flourish.

Containerisation is based on a simple premise. By minimising the costs of sea cargo, goods can be produced economically anywhere in the world.

Due to the lower transportation costs, instead of producing goods locally, it has become cheaper to produce goods in a country with a competitive cost advantage, such as Bangladesh, China, or Vietnam, put them in containers, and ship them to countries where they can be sold for a good profit.

And this has formed the basis of the modern consumer economy.

Nowadays, the use of shipping containers for purposes other than transport has also become widespread. Containers have been used as a basis for a number buildings, resulting in a new form of architecture dubbed “cargotecture”. What could have been ridiculous to imagine 25 years ago, is now seemingly trendy and popular in the 21st century.

The use of containers has grown in popularity in recent years years due to their inherent strength, wide availability and relatively low expense. Homes have also been built with containers because they are seen as more eco-friendly than traditional building materials. 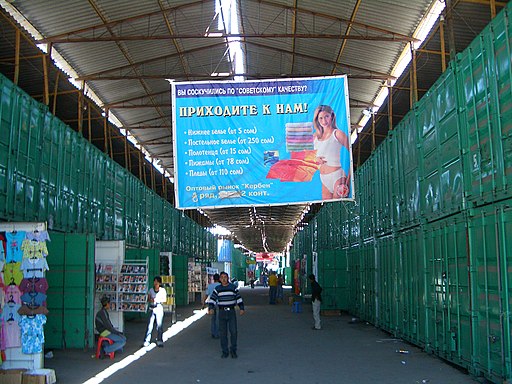 However, as some years have passed since the use of shipping containers as buildings, cons have also emerged.

Firstly, the containers may not be as ecologically friendly or cheap as it first appeared. The containers may be coated with harmful chemicals such as chromate, phosphorus, and lead-based paints. Moreover, wooden floors may be treated with toxic insecticides. This entails noticeable cost and effort to modify containers and make them habitable. Others have noted various issues such as space constraints and insulation issues. Structural weakness can also be a problem if too much steel is cut out of the containers.

Shipping containers are undeniably everywhere today. Nevertheless, one of the biggest obstacles facing the growth of transportation is the current lack of empty containers.

The main reason for the aching container shortage of 2020 and 2021 has been the coronavirus pandemic. As the pandemic spread out from its Asian epicentre, countries implemented lockdowns, halting economic movements and production. This meant that a huge number of ships and containers were stuck in ports waiting for a better tomorrow. This happened all over the world, more or less at the same time. However, when production began to recover in Asia, many containers were still resting in North American ports.

The remnant empty containers in Asia were loaded and sent to Europe and America. However, it took a while for the empty containers to arrive back to Asia – especially because coronavirus related restrictions and lockdowns were still in force in many countries.

This blockage in the supply chain has caused a long-term and worldwide disruption that was slowly getting better when the Ever Given fiasco at the Suez Canal hindered the healing process again.

Meanwhile container shipping rates – figures didn’t even exist little more than half a century ago, continue to define not just the transportation industry today, but basically every part of our daily lives.