The Research Institute for Work and Society of the Catholic University of Leuven has published the report analyzing the situation of the Belgian transport industry in comparison with other European countries. The analysis not only sheds light on the Belgian transport. It also refutes the stereotypes about the “unfair” competition from the East and identifies the most serious problems of the industry: “letterbox companies”. It turns out that most of them are set by western enterprises.

The Belgian research institute has published the report “The economic analysis of the road transport industry in Belgium on the background of the EU. Employers and employees in the ‘survival’ mode.” This document has a huge significance, especially at the moment when the fate of the EU transport market is being decided.

On the basis of the data from Eurostat and Orbis base (the biggest base of private enterprises in the world), the Belgian researchers summed up the last years of the transport market, identified its development tendencies and its main problems. The situation of the Belgian carriers is not the best not only because of the Eastern European competition.

Source: The Research Institute for Work and Society of the Catholic University of Leuven

According to the authors of the report, in the last decade, we could observe a unique shift of the transport operations to the East. Since 2012, the carriers from 13 countries of the ‘new’ European Union performed more international transports than those from 15 countries of the ‘old’ EU. “The share of the Fifteen in this type of transport dropped from 57 percent in 2008 to only 39 percent in 2016,” underlined the authors of the report.

Cabotage operations are limited by the EU regulations. Article 8 of the Regulation (EC) 1072/2009 stipulates that every haulier is entitled to carry out no more than three cabotage transports within seven days, starting from the day of unloading, in the course of international transport. Currently, the European Commission is working on the new regulations which, according to the western politicians, will be too liberal (the Commission proposed to abolish the limit of operations and to shorten the timeframe for carrying out the operations from 3 to 5 days).

More than two-thirds of the EU cabotage operations are carried out in two EU countries: in Germany (43 percent of all cabotage operations) and France (25 percent). However, the Belgian researchers pay attention to the key indicator of cabotage penetration defining the share of the foreign carriers in the domestic transport of a given country. Despite the fact that currently, the cabotage activity is much more developed than a decade ago, the above-mentioned indicator in the scale of the EU remains on the average level of 4 percent.

The biggest value is reported in Belgium – 12.3 percent, slightly lower in Luxemburg (9.3 percent), in France (8.1 percent) and Austria (8 percent). Compared to Belgium, the share of the foreign carriers in the domestic transport of Germany is nearly twice lower (6.5 percent). These results clearly show that cabotage is strongly concentrated in a few Western European countries. 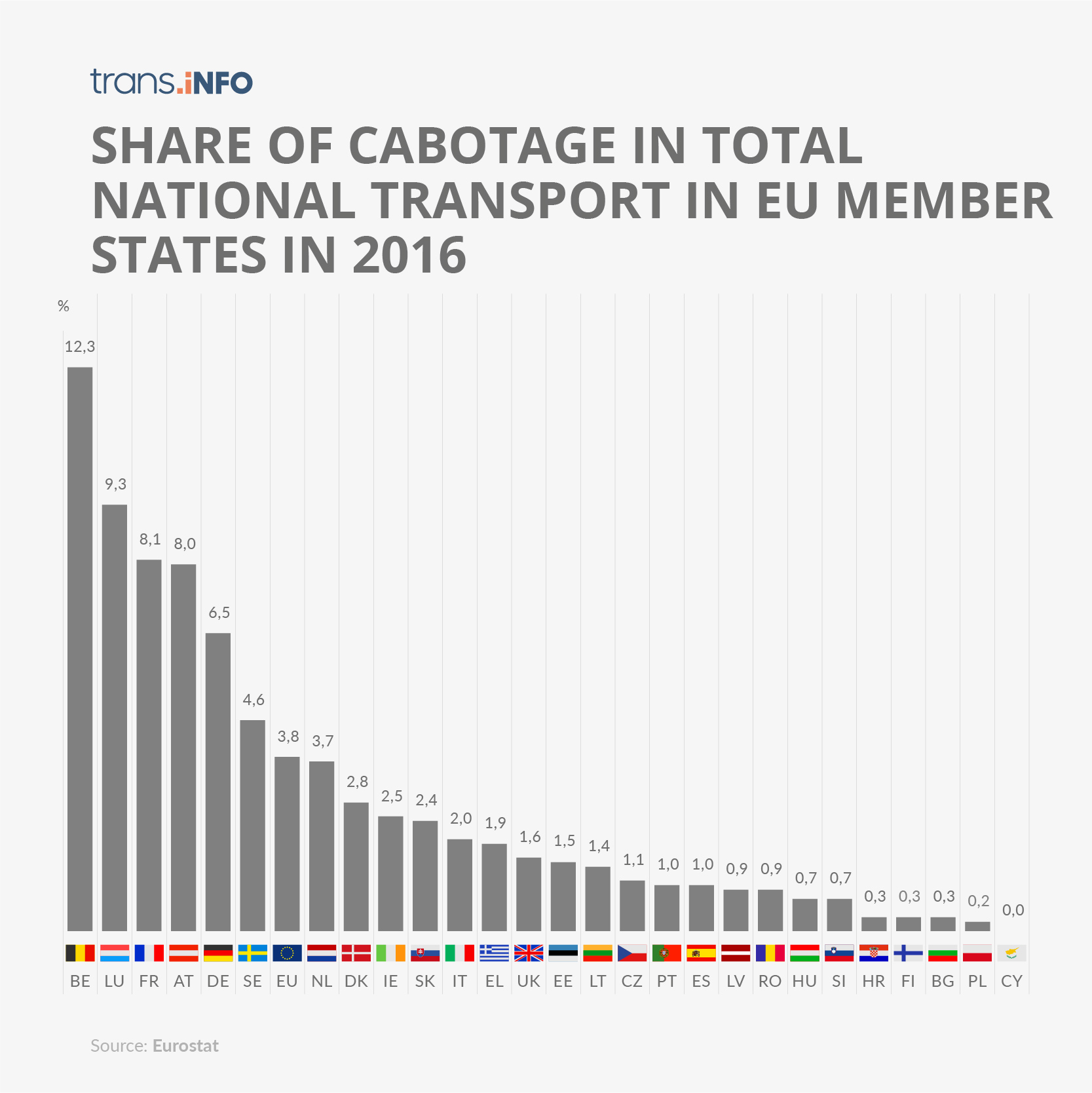 „Generally, it is claimed that most of the cabotage transports in Belgium are carried out by the countries of the New Thirteen,” claimed the authors of the report. However, this view is refuted by the Eurostat data that show that almost two-thirds of such operations are performed by the carriers from the Netherlands (31 percent) and Luxemburg (30 percent). The countries from Central and Eastern Europe have a much lower share in cabotage operations in Belgium. 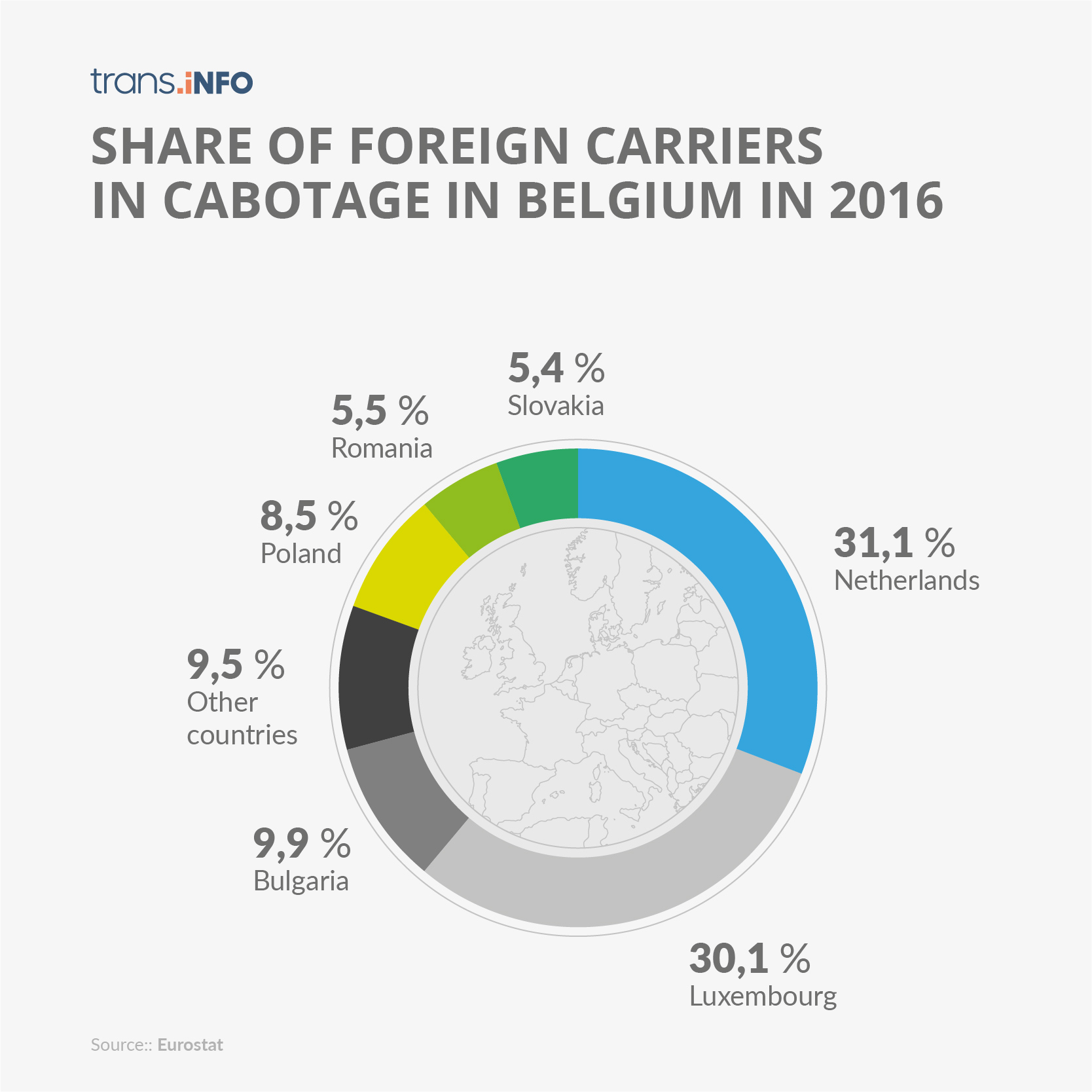 “Flagging out” or re-registering the company

Registering the company in the countries with lower labor costs is an important strategy of cost reduction, but, according to the report, for some transport companies it may be a “survival strategy”. It allows the company to derive profits and maintain lower margins, which is especially relevant in the price-sensitive transport industry. Therefore, the entrepreneurs from Western Europe have taken advantage of the EU enlargement and many of them have set their subsidiaries in the new member states.

On the basis of the analysis of the data gathered in Orbis database, the authors of the report found that 885 European road transport companies had one or more subsidiaries in other EU member states in 2016.

Although it is just 0.16 percent of all the carriers from 28 EU countries, when measuring the sales and workforce their share in the whole market is much bigger.

According to the report, the majority of “letterboxes” have been established by the carriers from Italy, the Netherlands, Spain, the United Kingdom and Belgium.

A “letterbox company” can be defined as a company that is formally registered in a member state but does not conduct its business there. In many cases it is hard to precisely determine whether a given subsidiary is a “letterbox”, however, the Belgian report contains surprising data. The researchers gained the information confirming that in the United Kingdom and Slovakia dozens of “letterboxes companies” are registered. They found also Belgian carriers in this group. For example, in the British town of Rugby at Clifton Road 21-23, there are 235 transport companies registered, including 129 with foreign shareholders. Similarly, in Bratislava, under the address Lucenecka Cesta 2266/6 there are 71 companies registered. 10 of them are carriers, including 9 from Belgium.

Has Belgium lost out because of EU enlargement?

The situation of the Belgian transport industry has been recently commented by the Belgian MEP Marie Arena.

I am aware that the Belgian transport industry is going through tough times. It suffers from the unfair competition more than other sectors, especially because transport, by definition, is international. Moving a factory is not easy. But the driver easily crosses all the European borders. Today he is working here, and tomorrow there. In the construction industry, already 15 percent of the workforce is composed of positioned workers. The number of workers from abroad in the transport industry is harder to estimate because the positioning of workers is not applied here due to the nature of this industry,” said Arena.

However, she does not claim that the Belgian transport industry is a great loser of the EU enlargement.

We have two options. Either we are against Europe and want to close the borders – this is what the populists say. In my opinion, then everybody will lose. Or we stay open. The transport industry in Belgium cannot survive when limited only to domestic operations,” said Arena.

For me this is the only way to go ahead. The integration of the European market has allowed the economy to prosper, which has also brought benefits for the transport industry. We have to create legal provisions which will let everybody win thanks to the growing economy and ensure the appropriate protection and salaries for the workers in the transport industry,” concluded the Belgian Member of the European Parliament. 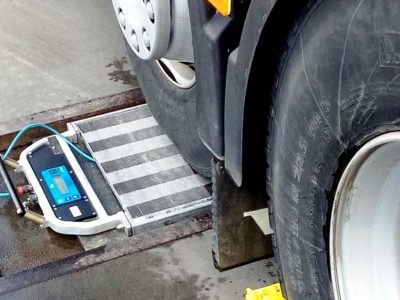 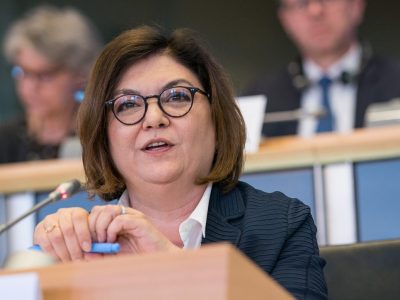 Meet the new transport commissioner of...