The 10 largest container ships in the world 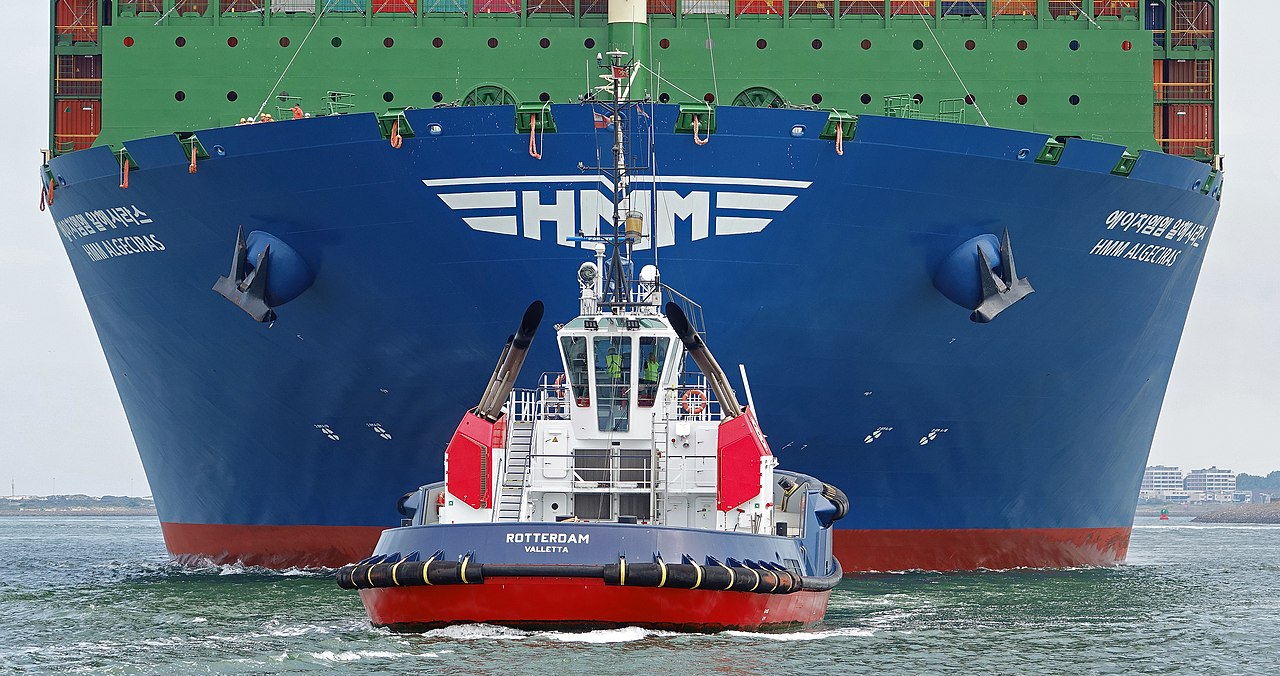 One of the biggest novelties of the 20th century, the standardized shipping container, has not “only” changed how our societies work, but it has also been the most important drive to build bigger and bigger container ships to transport them. The largest container ship in 2021 is much bigger than the Titanic and longer than the height of the Eiffel Tower.

The first commercially successful container ship was the Ideal X, a T2 tanker owned by Malcom McLean. It carried 58 metal containers between Newark, New Jersey and Houston, Texas, on its first voyage. Measuring 160 metres long and 21 metres high, it was nothing compare to today’s largest container ship, the HMM Algeciras, which is nearly 400 metres long and 33 metres high. The evolution is evidently remarkable.

However, to be fair to McLean’s first ship, those containers on the Ideal X weren’t the same as today’s, as they were transported well before the standardization of containers.

And now, let’s see what the largest container ships based on TEU are:

The world’s largest containership with 24,000 TEU capacity is the HMM (Hyundai Merchant Marine), designed in Algeciras and constructed by Daewoo Shipbuilding and Marine Engineering.

It is one of twelve 24000 TEU Class, eco-friendly container vessels. The Panama flagged vessel is 399.9m long with 33.2m depth. These parameters make the ship much bigger than the Titanic and longer than the height of the Eiffel Tower.

The vessel is also considered one of the most technologically advanced container ships in the world.

The giant ship is installed with scrubbers to meet new rules imposed by the International Maritime Organization (IMO), a U.N. maritime safety agency. They are designed to carry liquefied natural gas (LNG) tanks for conversion into LNG-powered vessels in the future.

The ship can reduce levels of sulfur oxide (SOx) emissions by installing an exhaust gas cleaning system using SOx scrubbers. The scrubber technology works by passing the dirty exhaust gas stream created by the engine through chambers that contain a carefully generated “scrubbing cloud” of water. 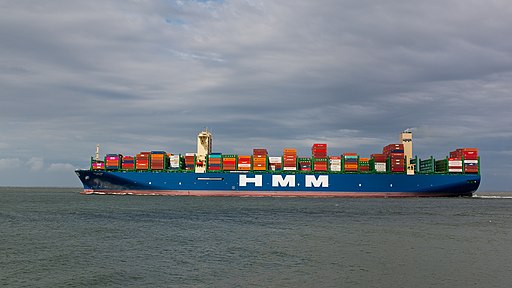 Sister of the HMM Algeciras, the HMM Oslo has a carrying capacity of 23,792 TEU and its current draught is reported to be 10.8 metres. The ship’s overall length is 400 metres and its width is 61.5 metres.

It was built in 2020 and is sailing under the flag of Panama.

Although it is one of the 12 vessels that make the HMM Algeciras class, this ship (together with HMM Rotterdam, Southampton, Stockholm and St Petersburg) was constructed by Samsung Heavy Industries.

The MSC (Mediterranean Shipping Company) Gülsün is the third-largest container ship in the world with a vessel capacity of 23,756 TEU.

It is the first vessel of its kind that can transport 24 containers side by side across the breadth of its hull.

The vessel is 400 metres in length and 62 metres in width. It was built by Samsung Heavy Industries and is registered in Panama. 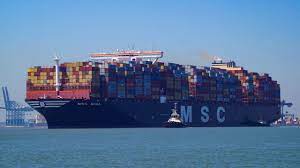 The MSC Mina also belongs to Gülsün class of container ships. Operated by the Mediterranean Shipping Company, the MSC Mina has a container carrying capacity of 23,656 TEU.

Constructed by Daewoo Shipbuilding and Marine Engineering, the ship measures around 400 metres long and 61 metres wide. 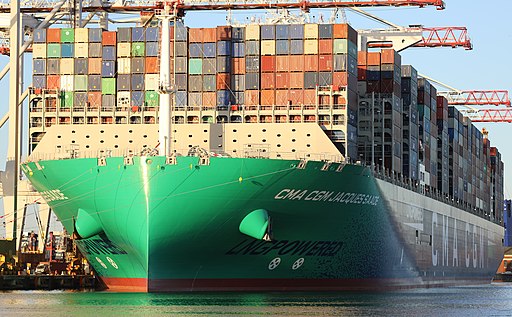 The Jacques Saadé of CMA CGM is one of the world’s largest containership powered by liquefied natural gas (LNG).

The Jacques Saadé is a group of nine container ships built by the China State Shipbuilding Corporation.

The OOCL (Orient Overseas Container Line) Hong Kong was the lead ship of a series of six G-class vessels to first-ever cross the 21,000 TEU mark: it has a carrying capacity of 21,413 TEU.

Constructed by Samsung Heavy Industries at the Geoje shipyard, the vessel has a length of 399.87 metres, breadth of 58.8 metres and depth of 32.5 metres. It was the largest container ship ever when it entered into service in 2017.

The COSCO Shipping Universe sports a carrying capacity of 21,237 TEU and is the largest cargo ship in China. It has a length of 400 metres and is 58.6 metres wide.

For optimum performance and enhanced fuel efficiency, the ship is equipped with ABB Turbochargers, which help it to achieve a maximum speed of 22 nautical miles per hour.

With a deadweight of 199,000 MT, the ship has become a flagship vessel of the 21st Century Maritime Silk Road, which links China’s coast to Europe and Africa through the South China Sea and the Indian Ocean.

Named after the French author and aviator Antoine De Saint Exupery, this ship was built by the Hanjin Heavy Industries and Construction in the Philippines. It has a capacity of 20,954 TEU, which makes it the largest container ship to sail under the Maltese flag.

It is 400 metres long and 59 metres wide and has a dead-weight of 202684 MT. It was launched in 2017 and entered into service in February 2018 to serve the French Asia Line 1 (FAL-1), which is the longest sea route connecting Asia to Northern Europe.

Although the Saint Exupery is run by diesel, it is still regarded as an environment-friendly vessel, because the aforementioned engine is of a new generation and because of its Becker-twisted fin. These both ensure significant reductions in oil consumption (-25%) and CO2 emissions (-4%).

Moreover, the vessel has a system of filters and UV lamps for the treatment of ballast water, which ensures greater protection of marine biodiversity.

This cargo ship was the first of the eleven Second Generation Maersk Triple E-class containers and was built by Daewoo Shipbuilding and Marine Engineering.

The Madrid Maersk was the largest container ship at the time of her launch, but was surpassed shortly after by the launch of OOCL Hong Kong, and was the second container ship to surpass the 20,000-TEU threshold, after the MOL Triumph. 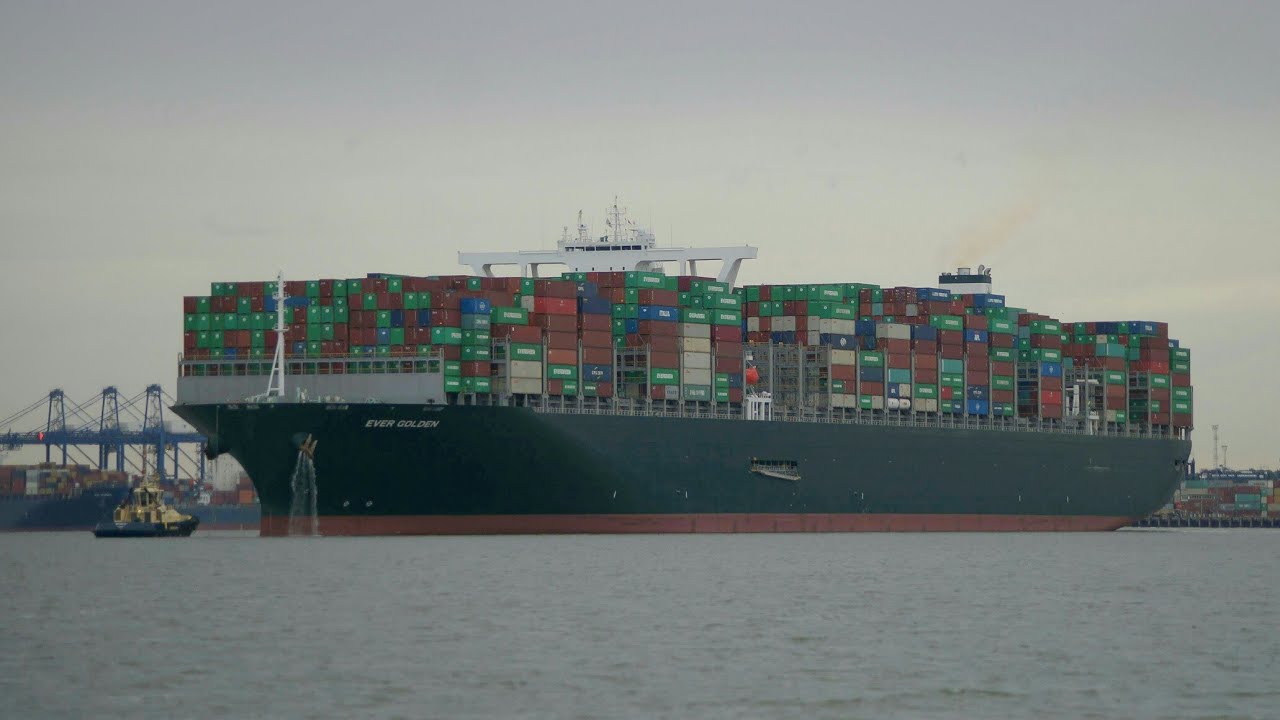 The Ever Golden was built in 2018 by Imabari Shipbuilding at Saijo shipyard. It is the first 20,000 TEU container ship built at Imabari Shipbuilding. Among its sister ships are the Ever – Goods, Genius, Given and Gifted, to be delivered to Taiwan’s cargo shipping giant EVERGREEN which currently operates it.

Although it is only the 10th largest ship on our list, the Ever Golden still has unbelievable dimensions: a DWT of 218,000 MT; a length of 400 metres and a breadth of 58.8 metres.

The vessel sails under the flag of Panama.

The ships that form our economy day by day

Container shipping vessels are a much more than simple means of cargo transports: they are one of the most important engines of our economy. Both literally and indirectly, these ships have radically transformed supply chains, and in turn, domestic and international economies across the world.

As much as 90% of world trade goods are currently transported by sea. There are around 53,000 ships in the world’s commercial fleets, 5,000 of which are container ships. Without these ships, many countries could not participate in global trade. Consumers would also have to absorb the increased costs – making the world poorer.

The unbelievable growth of container shipping vessels is led by one simple premise. By minimising the costs of sea cargo, goods can be produced economically anywhere in the world.

The biggest burden to building even bigger ships is the size of the Panama and the Suez canals. If this weren’t an issue, who knows what size of shipping vessels we would see today. But for now, it seems that we have reached our limits.