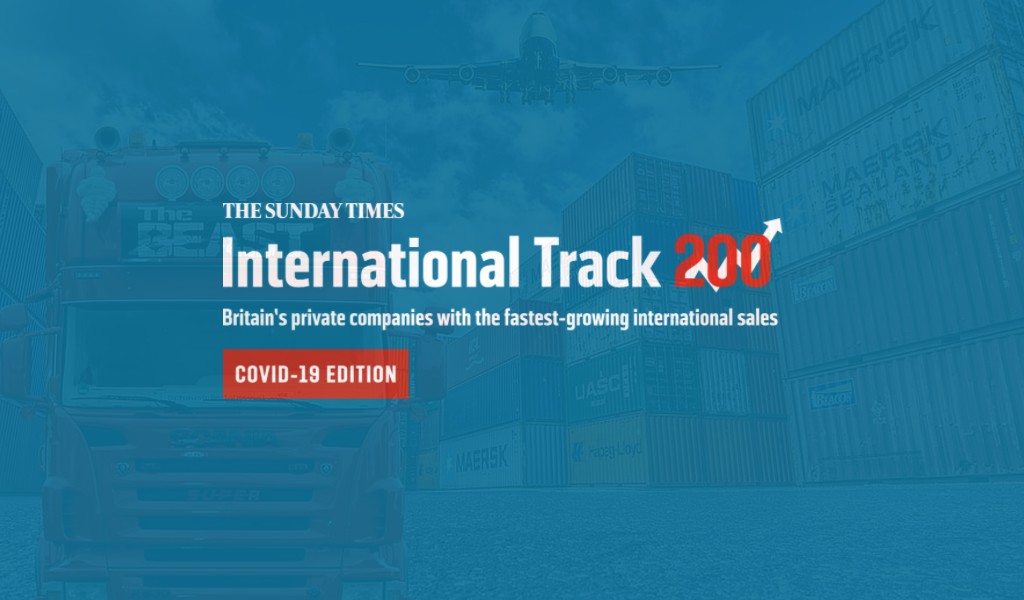 The Sunday Times recently published its International Track 200, which ranks Britain’s mid-market private companies with the fastest-growing international sales. Here, we profile the 6 logistics companies that made it into the top 200.

For those unfamiliar with the Sunday Times International Track 200, it is an annual league table researched and produced by Fast Track, an Oxford based research and networking events business. It has now been running for over a decade.

The table ranks the top 200 mid-market companies (with total sales of £25m+ up to £1bn) based on their growth in international sales over the last two years of available data.

Details on financials and staff relate to before Covid-19 struck for 170 companies, with 30 having financial years ending after March. Some are expecting a drop in sales this year, while others – particularly those in healthcare, IT services and ecommerce – have seen significant growth. The effects of the new trade arrangements with the EU are not yet reflected in the companies’ results – reads the research report.

According to the research, the average international sales growth over the last two years for the 200 companies was 55% a year, to a total of £8.7bn on combined total sales of £19.1bn.

These companies export to all corners of the globe and employ 107,000 staff, having added 31,500 jobs over the same period. Featured companies include brewery BrewDog (No 49), fitness clothing brand Gymshark (No 59), nurseries operator Busy Bees (No 63), fashion retailer Reiss (No 166) and bicycle manufacturer Brompton (No 175).

As for the transportation and logistics sector, 6 companies are on the list: BJS Home Delivery, Kammac, Edge Worldwide Logistics, Huxloe Logistics, John Good and Ligentia.

The highest logistics company on the list, BJS Home Delivery comes in in 22nd place. The company offers delivery and haulage for both domestic and international clients. Founded in 2009, BJS Home Delivery specialises in two-man home delivery with a haulage division and warehousing and storage services.

It is led by founder and managing director Harinder Singh, who oversaw sales of £6.4 million in 2019. What’s even more spectacular is the West Midlands based company’s two-year average international sales growth, which was 97.82% per annum.

29th on the list is Kammac, who offers third party logistics (3PL), distribution and storage services for pharmaceutical and healthcare clients, grocers and retailers. The company was founded back in the 1980’s by Managing Director Paul Kamel. It now employs nearly 300 people.

82nd on the rankings is Edge Worldwide Logistics (former A. J. Edge Limited). The company specialises in sea, air and road movements. Since its foundation in 1989 by Alan Edge, the company has grown steadily as globalisation has expanded supply chains.

In 121st place is Ligentia, an international supply chain management provider specialising in manufacturing, consumer brands, pharmaceuticals and the retail sector. It focuses on delivering data driven supply chains for for the likes of John Lewis, Itsu and Hobbycraft.

As the ranking states, private equity firm Equistone acquired the business for an undisclosed sum earlier in February.

Huxloe Logistics is part of the Huxloe group, which also includes a Spanish courier and a software development company that helps clients manage delivery schedules. The main firm, Huxloe Logistics, labels packaging in China and ships parcels across the UK and Europe, delivering more than 17 million last year.

Huxloe’s overseas sales hit £4 million in the year to March 2020 and its two-year average international sales growth was 27.97% pa.

In 198th place, John Good Group is a shipping agent providing services in air, sea and road transport. The company has a more than 150 year-old-history of freight forwarding. Now it also offers port agency services, warehousing and distribution, and corporate travel.