Thor 24: you either love it or hate it. Jaw-dropping $7M creation or unbelievable kitsch? 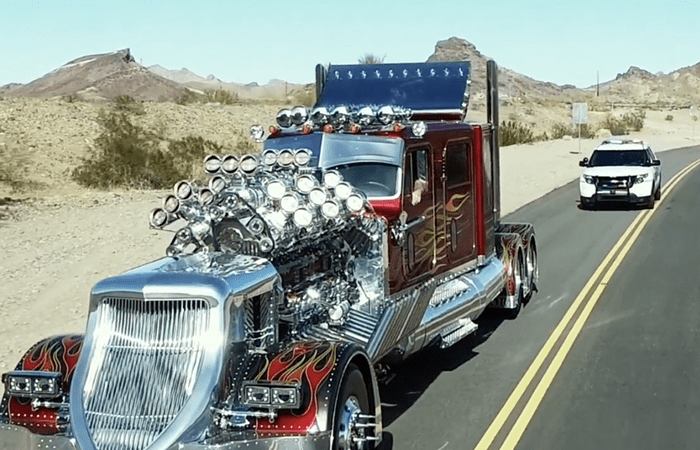 Thor 24 will delight some and torment others. But one thing is certain, this truck will make an impression on everyone – either a positive or a negative one. It took Thor’s owner 7 years of work and $7 million to create this monster.

American millionaire Mike Harrah spent a fortune on making his truck. With its 1979 Peterbilt 359 cab, Thor 24 impresses not only with its appearance but also with its tremendous power. Under the hood, the vehicle has the engine V24-71 Detroit Diesel with 3974 hp, taken from a 92-foot boat and able to accelerate this monster to 130 mph (210 km/h). The interior is also luxuriously equipped – with a world-class sound system and 7 screens, including one 40-inch.

What made the tycoon create Thor?

I’ve professionally raced cars, motorcycles and boats. And I always had this vision of taking a huge diesel engine and putting it into a custom-built semi-truck. One day, this guy from San Pedro, California, called me and said he had these two 24-71 Detroit Diesel engines off a 300-foot boat he wanted to sell,” said Harrah in an interview for the American Trucker magazine.

Harrah bought both engines, but for a long time, they sat in a hangar. After about a year, he started to envision Thor 24. He asked himself, ‘What could I design and build that was unlike anything else in the semi-truck world?’ His first thought was to put both engines into one truck, but he didn’t because it was too heavy, with too much torque. So he decided to stay with one and add power to it by means of pressurized air.

It took about a year to develop the engine itself.

Almost everyone told me it would never work. That’s when I ran it and realized its maximum power, with explosive potential,” recalls the American.

Then work started on creating a body for this ‘heart’ of the vehicle.

I hired a world-class crew to fabricate and manufacture all the parts for the entire truck, based on my overall design. I had a crew of three to four people. They worked on it every day for seven years to build the most incredible truck in the world. I named it Thor,” added Harrah.