The Federal Office for Goods Transport (BAG) has published a list of truck traffic bans on public holidays in Germany in 2021.

In Germany, trucks with a gross vehicle weight of more than 7.5 tonnes and heavy goods vehicles with trailers, regardless of weight, are subject to bans on public holidays and Sundays.

Restrictions apply across the entire road network on Sundays and public holidays between midnight and 10 p.m. It should be noted, however, that some of the holidays, and the traffic bans associated with them, only apply to specific regions.

In recent days, the BAG has published a list of public holidays in 2021 on which traffic bans will apply.

– 1 November – All Saints’ Day (only in the following states: Baden-Württemberg, Bavaria, North Rhine-Westphalia, Rhineland-Palatinate and Saarland)

As agreed, the duration of the ban on heavy goods vehicles over 7.5 tonnes will be limited on these days to between 6 a.m. and 10 p.m. (on a public holiday in the federal state concerned). The regional authorities want to improve traffic flow in this way.

In addition, both federal states grant the right to drive trucks on important transit routes A1, A2, A30, A31 and A33 between 6 a. m. and 10 p.m. This regulation is also to apply if the Reformation Day or All Saints’ Day falls on a Sunday.

Details of the routes which can be used by trucks over 7.5 t on public holidays – Reformation Day in Lower Saxony and All Saints’ Day in North Rhine-Westphalia – can be found in our article on the subject.

In addition, Hesse, where in contrast to the bordering North Rhine-Westphalia All Saints’ Day is not celebrated, has abandoned the prosecution and punishment of offences related to violations of the truck ban in the state on this date.

Restrictions do not apply to all

Here is the list of trucks exempt from German Sunday and public holiday bans :

– the combined transport of goods (port and road) between the point of loading and unloading and a port situated within a distance not exceeding 150 kilometres (delivery and export); 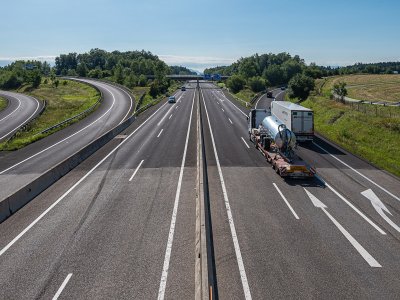