Turkmenistan: business, logistics and carpets in a country which is hard to get to. 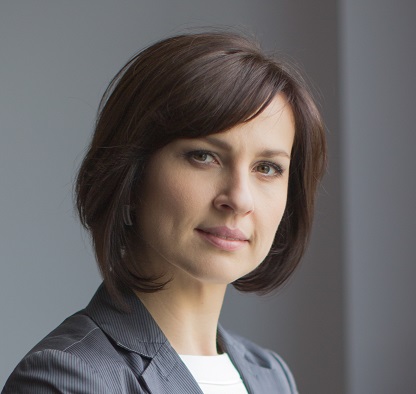 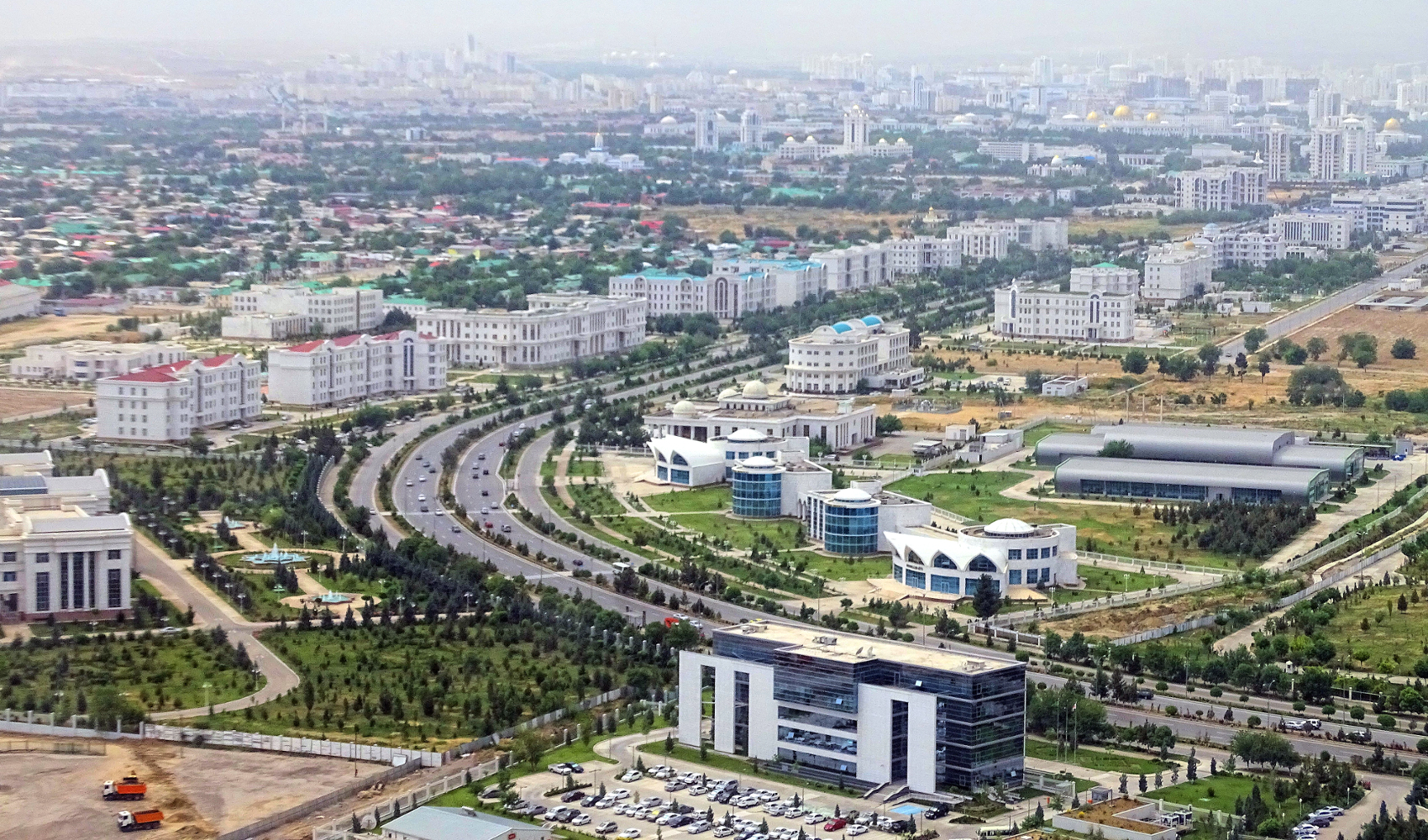 I used to meet with Ashgabat entrepreneurs in Frankfurt, Moscow and Warsaw. I did not believe that one day I would get to this closed country – it was made possible thanks to the invitation to a logistics conference in September 2018. Turkmenistan wanted to introduce Transport & Logistics industry to the newly built port of Türkmenbaşy on the Caspian Sea.

Talking to logistics specialists from eleven countries I realized that most of them had simply taken the opportunity. The conference was a good way to get a visa. They came to see for themselves what Turkmenistan really is. But first things first…

Turkmen logistics, as well as the overall country economy, is dependent on the political situation. On one hand, huge investments in the port, roads, airport, production plants; on the other hand – broken relations with neighbouring countries. E.g., due to the conflict with Iran, it is impossible or very difficult and expensive to bring goods into the country across the Iranian border.

A Georgian partner told me about a case, when they loaded several railcars in Georgia operated by the Tajik state railways. Meanwhile, relations between Turkmenistan and Tajikistan broke down, and the railcars that came by ferry across the Caspian Sea to the port of Türkmenbaşy were not allowed into the country due to the country of their registration. The shipper had to return the rail wagons by ferry back to the port of Alyat in Azerbaijan, then reload the cargo to other cars and send it again.

Truck drivers love driving from Europe to Turkmenistan – it’s a long route, lots of new things to see: totally different sort of life, new landscapes, undiscovered food, interesting people. Every trip is an adventure for them. An extra attraction are camels walking along the roads and looking into cabin windows.

There are also barriers: complicated visa process and long waiting time, very strict customs regulations. We heard about a driver who received 7 months in prison for smuggling cigarettes, in addition, his truck was confiscated. The new port of Türkmenbaşy, which we visited during the conference, creates enormous logistics and commercial opportunities, but so far there’s little going on there. Small ferries sail under Azerbaijani flag between the port of Alyat in Baku, the capital of Azerbaijan, and Türkmenbaşy. There’s no precise timetable in line with the Oriental tradition: when it arrives – then we’ll sail. Waiting time for departure varies from 1 to 7 days.

Since few years I’ve heard of plans to launch a ferry between the port of Türkmenbaşy and the Russian port of Makhachkala. This connection will shorten the route to Europe by thousands of kilometres that must now be covered driving from Turkmenistan overland through Uzbekistan and Kazakhstan. Currently estimated start is early 2020. I know that the project groups of the two countries meet and work. We are waiting.

As for the economy and business, it is worth saying that the prosperity of the country depends on the sale of gas. The termination of the contract with Russia resulted in a drastic economic decline. The current situation in the country is complicated, even though China is buying gas. Most enterprises are state-owned. Huge modern production plants appear, but they are not always able to sell their products.

There are two binding currency exchange rates. There’s almost no currency conversion, which in practice means that only a company that has foreign currency income is able to officially purchase goods abroad for foreign currency.

Imported goods are subject to laboratory testing. Upon the railcar receipt at the station, the cosmetics importer waits a week for the test results before placing the product on the market. Another businessman, when trace amounts of GMO were found in a product from Europe few years ago during tests, was summoned for questioning for two weeks. He was accused of attempt of poisoning the Turkmen people. In the end he had to say goodbye to the whole batch of goods that went to scrapping. He was happy to stay at large.

Lots of different weird things are happening. In general, local businessmen there have a common feature, which is courage – I admire their strength of mind. You should build your relationships with Turkmen entrepreneurs consciously, patiently, wisely, taking into account their culture and traditions. I recommend my article on this topic: https://trans.info/en/building-up-relationships-with-a-business-owner-from-middle-asia-162689

Trip to the conference

A friend of mine who had visited Turkmenistan a year earlier on her way to Iran (it’s easier to get a transit visa than a direct entrance permit to the country), gave me some tips on how to behave:

On Friday night, i.e., 40 hours before scheduled Sunday flight I got a list of conference participants approved by Turkmen foreign ministry. My name on the list meant that I would get a visa at the airport upon arrival in Ashgabat, the capital of Turkmenistan.

I only had a ticket to Moscow purchased. The Turkmen airlines flight from Moscow to Ashgabat was fully booked and I only received an e-mail confirmation from the organizer that I should feel safe since the Turkmen party would provide me with the flight ticket and I would pay upon arrival – not yet clear to whom.

I spent Saturday morning watching spots about Turkmenistan. I’d heard lots of rumours from our customers and partners but only then I did realise that it was me flying there next day and having something absolutely unknown and possibly dangerous ahead.

Despite my fears that I would not leave Moscow since I had no ticket, or that I wouldn’t get a visa at the airport, everything went smoothly. It is true that my Polish SIM card did not work there. I had contact with my family and the rest of the world via local Turkmen card. There was no access to social networks, out of all messengers only IMO and Skype were not blocked.

There was a constant self-control: show no surprise (although I was constantly surprised), praise, thank, say less – listen more. When our plane landed in Moscow on the way back, I realized what a luxury is the Internet with the access to information and communication.

On the flight from Moscow to Minsk I met a European businessman who had been providing long and yet unsuccessful remote negotiations with a Turkmen company. Upon an hour conversation on various topics he smiled and asked: “Have you noticed that whenever you say something about Turkmenistan you start whispering?”

What Turkmenistan is famous for

The symbol of the soul of Turkmenistan is a wool carpet, its history dates back to few thousand years. 11 years ago I received two pieces as a gift from Mrs. Bahargul and her daughter Altyn. I remember them telling me how they applied for permission to export the carpets from the country, each with a seal and a certificate. That time they visited Poland twice and during each visit they brought carpets for all the exporters and us – strong women.

During our stay in Ashgabat my colleagues visited the Carpet Museum with the largest hand-woven carpet in the world measuring 301 m2. Everyone was deeply impressed, many conference attendees returned back home with carpets.

While they were visiting museum, I had my own visit to our old customer’s place. The whole floor was covered with carpets, few in each room, one overlapping the other. The more carpets you have at home – the greater prosperity is. Allegedly, this rule applies to all the nationalities living in Turkmenistan. My hosting party was an Uzbek coming from the town of Daşoguz in the northeast of the country where lots of ethnic Uzbeks live. His wife treated us with authentic Uzbek pilau and samsa dumplings.

The marble city of Ashgabat, listed in the Guinness Book of records as the city with the highest concentration of white marble buildings, is in fact all white. In the wide streets with rich tall buildings, where a pharmacy looks like a palace, there are almost no people. It is recommended to spend free time at home. On newly built streets, it sometimes feels like you’re in an artificial computer city. Moreover, the architecture is quite monotonous, the cars are all light-coloured. Making photos of the main street and government offices is not welcome. The city is full of monuments – glowing at night constructions with several legs and high columns.

Darvaza, a burning crater is a trace of a man-made disaster. In the 1970s, a gas field was set on fire to burn off the remaining gas – it is still burning. This place impressed us. The very folk-name itself sounds promising – the Gates of Hell. We rode the bus while the road allowed, then switched to Soviet UAZ SUVs. 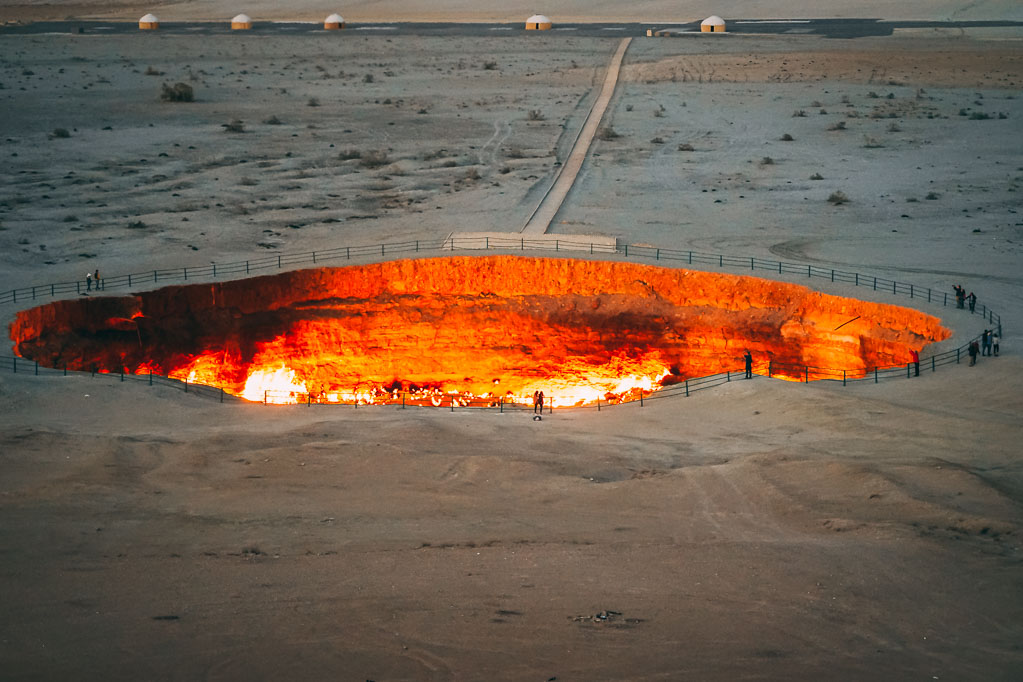 We drove in the dark in a group of cars, bouncing on the seats, right on the dunes of the Kara-Kum desert. I felt like in an American movie about Afghanistan. Immediately after exploring the crater, right in the night desert, we ate a fragrant mutton soup cooked over a fire. I declare that Turkmen melons can confidently compete with Uzbek ones in sweetness, and I also liked the shashlyk.

On the Caspian coast, in the resort of Avaza where the conference was held, cottages and several luxury hotels, a swimming pool, an aquapark and a children’s park were built at an accelerated pace. True, there is not a single living soul, despite the fine weather and +30 degrees. The situation is identical with the sports town in Ashgabat built for the 2017 Asian Games, reportedly for $ 10 billion, and with terminals at already mentioned port of Türkmenbaşy.

It was a great pity that we did not see the Turkmen horses of the Akhal-Teke breed. These are very hardy, strong and fast animals with noble appearance, exceptional lustre, long neck, small head and large eyes and ears. These horses are famous worldwide, very expensive and difficult to get.

Turkmenistan is a closed country, which makes it even more interesting. I appreciate my partners there. I recall this trip very warmly and would like to go back there, at least to see the horses. I recommend that you get to know Turkmenistan better.