New drone footage has revealed the construction progress at the site of Finland's Kouvola intermodal terminal, a 42-hectare facility that will be able accommodate freight trains 1,100 metres long. The terminal is expected to be up and running by 2023. 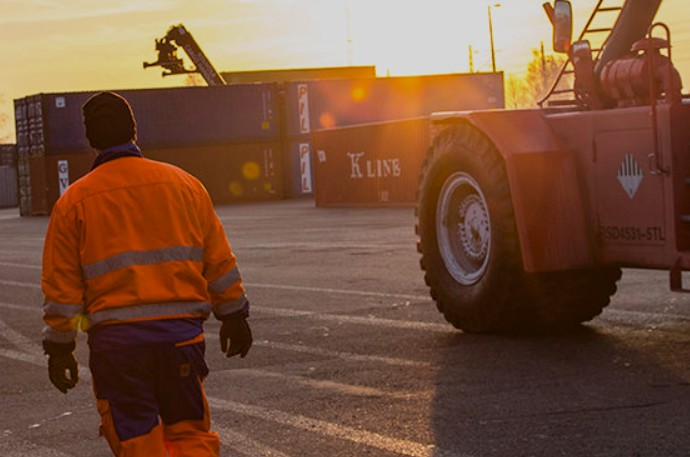 Once completed, the facility will be tasked with meeting Finland’s growing national and international goods traffic demands. Besides making it easy for trailers to be moved to and from trains and trucks, the terminal will utilise new cargo-handling methods using robotics and digitalisation that shall generate time and cost savings.

The City of Kouvola has invested €28 million in the project, which has also received €9 million in funding from the EU as well as  €4.4 million from the Finnish Government.

At this moment in the time, the terminal’s loading dock is under construction. Still in its infancy, it will eventually be 1,100 metres long. The terminal area is about 42 hectares in size, while the business and logistics area to be built next to it spans another twelve hectares. The latter can be expanded if deemed necessary.

The terminal is to be split into zones marked with alphabets and numbers, which will then be leased to different operators for unloading. More than 60% of the terminal area is currently completed; the entire facility is expected to be completed by the end of next year. Everything could be up an running in early 2023.

As project manager Tero Valtonen told Finnish website Yle, there is no such terminal yet constructed in Europe:

A terminal is under construction in Hungary, which I remember will have berths as long as in Kouvola. However, that too is not yet complete. There are no such places in Europe. This is unique.

Valtonen added that according to European standards, terminals should be able to unload 750-metre trains. However, It is impossible to build terminals so long in many places.

According to Yle, the Kouvola road and rail terminal has long been marketed as a crossroads for Chinese trains. However, rail freight traffic on the route between Kouvola and Xi’an in China, which began a few years ago, has since waned. Amid this development, the terminal operators believe rail freight from Russia could fill the gap.  Valtonen told Yle that Railgate Finland, who will operate the terminal in the future, is currently in active discussion with various actors about what traffic could enter the terminal. However, nothing has been agreed yet.

Chinese trains are one – they may be in the future, but they have never been a big percentage of Finnish container traffic. All operators and traffic flows are a bit of a wait-and-see attitude. Operators want the terminal to be paved. It will happen next summer. I would think that things would start to happen then, says Tero Valtonen.

Valtonen also believes that traffic will be received from Russia to the terminal:

The track comes from that east, so I think some bulk stuff will come and go from here and there. We must not forget that we have a double track to Vainikkala. From there, those tracks go onto Kouvola. The axle weight has been raised to 25 tons, and long trains are brought here.