A micro-warehouse is an ideal solution for urban deliveries. This is what German experts say. 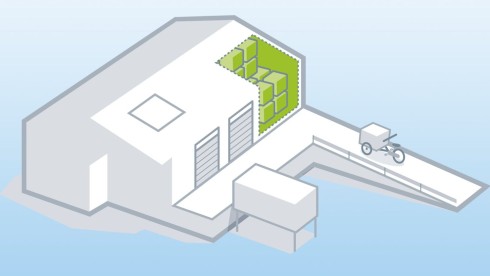 According to scientists from the German Fraunhofer Institute, one of the largest research organisations in the world, micro-warehouses could significantly reduce truck traffic in cities and thus reduce harmful emissions.

The Fraunhofer Institute for Material Flow and Logistics (IML) and the consulting company Agiplan conducted a study on micro-warehouses for the Mittlerer Niederrhein Chamber of Commerce and Industry.

The document prepared by IML and the consulting company shows that micro-storage can contribute to the reduction of truck traffic and emissions in city centres. The study can be used to support municipalities in making transport policy decisions.

The solution covered by the report can make traffic in cities more sustainable and meet the challenges of the future,” says Prof. Uwe Clausen, Director of Fraunhofer IML.

In the study, experts addressed various issues such as delivery radius, number and size of parcels, requirements for facilities or operators, and financing models.

The authors of the report assumed that goods from micro-storage facilities would be delivered to customers emission-free, e.g. by cargo bikes, micro-cars, or transport trolleys. This would, firstly, reduce the likelihood of congestion by parked trucks or vans and, secondly, ensure that goods up to the last mile are delivered in a completely environmentally neutral manner.

Although it is hard to envision a 100% elimination of traditional delivery vehicles in the CEP industry, the aforesaid solution would help to significantly increase the efficiency of courier companies. In addition, it would allow for faster deliveries, according to the IML and Agiplan study.

According to Fraunhofer’s scientists, a warehouse of only 180 square metres and 12 cargo bikes would be able to handle 1,400 parcels per day within a radius of 2-3 kilometres.

Such a facility should have separate storage areas for individual service providers, social rooms and a loading ramp. The key success factor is the road link and the availability of the loading and unloading area for vehicles with a GVW of up to 7.5 tonnes,” comments one of the authors of the study, David Rüdiger from Fraunhofer IML.

As confirmed by the survey among courier companies, there is a lot of interest in such a solution for the last mile transport.

According to another study, “Last Link: Quantifying the Cost” by Cushman & Wakefield, the share of real estate costs is only 4.3% of the total logistics expenditure. Transport accounts for more than half of the costs (50.3%). Therefore, the application of the model studied by the Fraunhofer Institute can not only improve traffic flow in cities, reduce emissions and speed up the delivery, which customers expect but also reduce logistics costs. As Cushman & Wakefield points out, reducing driving time by an average of 10 minutes from the city’s warehouse to the first point of delivery saves an average of €1 million per year. City warehouses allow to reduce drivers’ driving time and payroll costs, reduce fuel consumption and even optimize the use of delivery vans.

The implementation of the above model can be supported by a warehouse platform, which allows finding suitable warehouse space throughout the European Union. Such a solution is offered by Wareh.com, which recently won the title of the most promising logistics start-up at the hyperLOG 2019 conference.