UK Prime Minister Boris Johnson has suggested that the haulage industry in Britain is to blame for a lack of investment in lorry parking facilities. 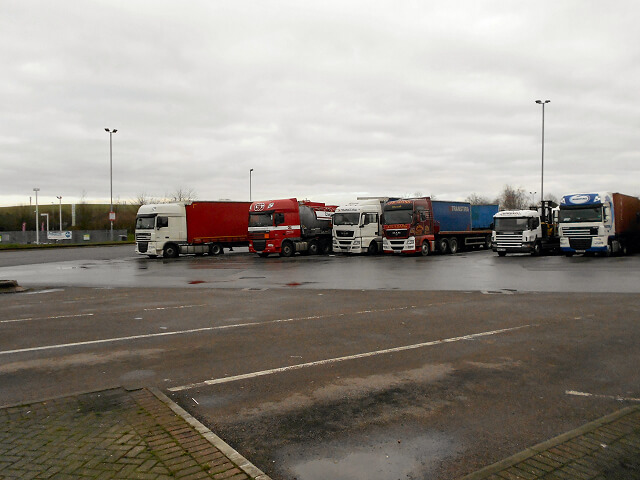 The Prime Minister made the comments during an interview with Andrew Marr yesterday, in which he also took aim at hauliers for not improving pay:

“What we had for decades was a system whereby [sectors like] the road haulage industry… were not investing in the truck stops, not improving conditions, not improving pay and we relied on very hard working people who were willing to come in, largely from European accession countries, to do that work under those conditions.”

“What you need to do is make sure that people now invest in basic equipment, such as truck stops, and better pay.”

By saying that “the road haulage industry were not investing in truck stops” and adding that the UK Government needs to make sure that “people” invest in truck stops, Johnson appeared to be pointing the blame at hauliers for Britain’s sub-standard parking facilities. Naturally, at the same time, the comments seem to be an attempt to absolve the current administration of any responsibility for the problem.

Is it the responsibility of hauliers or the government to invest in lorry parks? Earlier this year, Trans.INFO spoke to Gary Whittle, Commercial Director of Meachers Logistics, about the driver shortage issue and the need for better parking facilities. During the interview, Mr Whittle admitted that there were things hauliers could do about parking, but added that “there’s always a balance when it comes to things like lorry parks”. He also explained how many of lorry parks in the UK are unprofitable and too expensive:

“There are things we can do, of course. There’s always a balance when it comes to things like lorry parks and so on. The reality is that these parks tend to go bust – there’s not that many of them around anymore. The reason being is that they’re too expensive.

Although it sounds awful, it always comes back to one thing, which is money. If it was free to park in fantastic facilities, everyone would do it. If it cost us 150 pounds a night, and we were able to pass it on to the customer, then we would do it.

We’re stuck between a sort of rock and a hard place. Yes, we should increase the facilities as much as we possibly and sensibly can. But there has to be a recognition that there’s a cost associated with doing that if it’s a private entity, and those costs need to be reflected somewhere.”

In recent days, more hauliers have been commenting on the dire lorry park situation in Britain. Writing on Facebook, Templar European Logistics said its weekly parking bill tops £400, 95% of which is spent in the UK. The road transport firm added that UK services “are rubbish”, while the showers are “non-existent” and the choice of the food “will bankrupt you”.

Also writing on Facebook, JAD Trans Scotland Ltd spelled out the difference in standards between French and British motorway services:

“Our driver parked up in the South of France. Has had a shower, fresh coffee and breakfast. Last night he had multiple choices from salads to Burger King to eat. The facilities were clean, tidy and not overpriced. This is not a truck stop but a motorway service area with parking for hundred plus trucks. Picnic tables, even an exercise area. A safe clean area to park the truck for the night. The cost…..FREE and this is the standard pretty much all over Europe. In comparison, in the UK the driver is charged £25 – £30 and the standards are much lower. Drivers and companies resent having to pay this and results in more and more vehicles parked in lay-bys, which in turn increases truck crime. With the driver shortage, surely MSA’s should be doing their bit and achieving the above standards and stop using HGVs as a way of profiteering. The truck is not an enemy, the driver is a professional, surely it’s time they were treated as such?”

The debate over parking facilities follows reports that the UK Government is preparing plans to build “luxury” lorry parks to make the profession of truck driver more appealing. What is exactly meant by “luxury” is nonetheless unclear, and there are numerous barriers that need to be overcome if they are to be constructed in the first place.

Duncan Buchanan, Policy Director of the RHA, told the Telegraph on Friday that the biggest obstacle is “NIMBY councils who can always find a reason to refuse an application to build a lorry park.”

In a statement published on the Road Haulage Association’s website, Josh Reynolds, who edits the RHA’s magazine, added:

“I’ve been following this story since I joined the RHA, and I’ve seen no real progress made. Truckers are essential workers, and they’ve proved that time and again during the Covid pandemic. Like all workers, they deserve access to toilets, showers and decent food. The reports of drivers having to relieve themselves at the roadside are depressing and all too common. How can government expect to bring people back to driving lorries if they know they’re unlikely to be able to park up safely, use a proper toilet or have access to decent food and a shower?”

Meanwhile, the European Union has agreed to spend €100 million on lorry parking facilities.

“This new dedicated EU funding for SSTPAs is excellent news for the commercial road transport industry. We are looking forward to a maximum deployment of new parking projects and call on Member States to work closely with interested parties to apply to the EU’s call for proposals. This opportunity can make a huge difference for drivers and operators in the coming years.”