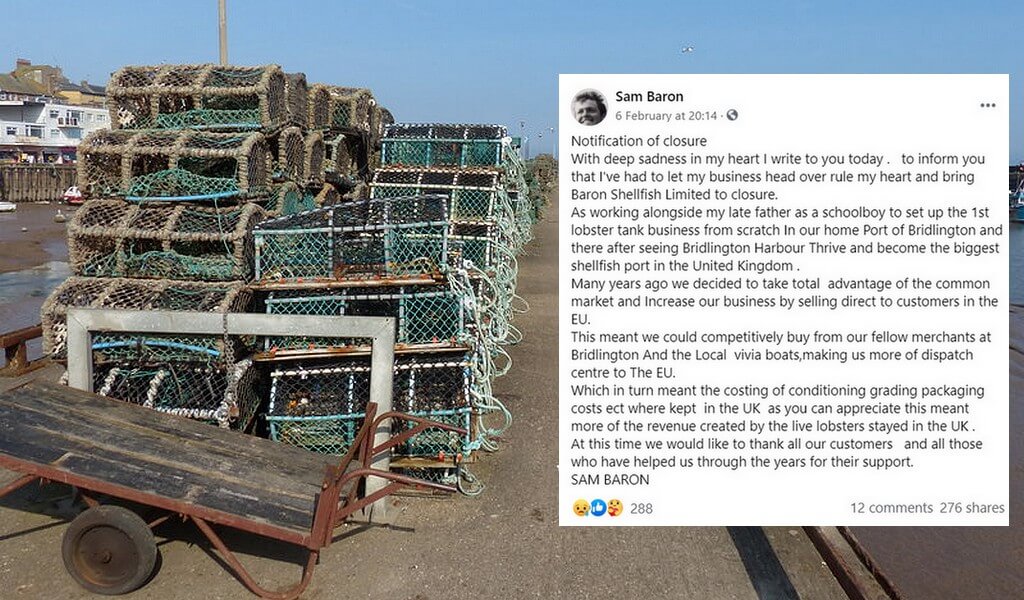 A shellfish exporter who closed his business due to the paperwork obstacles caused by Brexit has said transporting lobster to the EU is “like playing Russian roulette with five bullets in your gun.”

Sam Baron, who took over Baron Shellfish from his father and scaled the business by selling to EU countries, said an emotional goodbye to his business on Saturday.

Writing on Facebook, Baron said he was closing the business “with deep sadness”:

With deep sadness in my heart I write to you today to inform you that I’ve had to let my business head overrule my heart and bring Baron Shellfish Limited to closure. As working alongside my late father as a schoolboy to set up the 1st lobster tank business from scratch in our home Port of Bridlington and thereafter seeing Bridlington Harbour thrive and become the biggest shellfish port in the United Kingdom. Many years ago we decided to take total advantage of the common market and increase our business by selling direct to customers in the EU. This meant we could competitively buy from our fellow merchants at Bridlington and the local vivia boats, making us more of dispatch centre to The EU. Which in turn meant the costing of conditioning grading packaging costs etc where kept in the UK. As you can appreciate, this meant more of the revenue created by the live lobsters stayed in the UK. At this time we would like to thank all our customers and all those who have helped us through the years for their support.

In a discussion with the Guardian’s Rajeev Syal, the shellfish exporter said that he had heard “b*llshit from the government” and said that all the problems were “Brexit-related”.

“All we have had is bullshit from the government, promises that haven’t been kept. I am winding up the business while I still have enough to pay redundancy to my staff. People say Boris has tried his best, but it just hasn’t been enough,” he said. “It’s the extra costs and uncertainty. We have to fill in new health notes, and there is a lot of new paperwork, including the catch certificates. Every time you put lobsters on transport, if anything in the paperwork is wrong, you have lost everything. It is all Brexit-related – the extra costs, extra paperwork and the extra gamble, and it is down to the government and the EU. Every time you send out transport with lobster, it is like playing Russian roulette with five bullets in your gun.”

The collapse of Baron Fishing comes after a series of warnings from exporters of fish, seafood, meat and dairy products.

Last week, Scottish fish exporter SB Fish tweeted that their 3-day delivery to the EU had been held back at customs for a 4th day. Before tagging the likes of Boris Johnson and Michael Gove, SB Fish added that the problems are “not going away by magic Unicorns.”

The paperwork issues have been perfectly exemplified in the video below, which shows just some of the required documents:

What’s happening to food exports?Coming up on #bbcnews10 Bridport, Dorset fishing business owner Charlie Samway describes new 26 step process to export back across Channel what they catch in it… adamant a month in, having prepared extensively, these aren’t “teething problems..” pic.twitter.com/C9T4DSfpfZ

In a bid to try and solve some of the paperwork issues that have brought about the closure of Baron Shellfish, the UK Government have agreed to set up an industry task force.