Container traffic on Eurasian routes increased by 50%. Priority is given to UK connections

In the first six months of 2021, 336,500 TEUs were transported from China to the EU via the New Silk Road corridors. This is 50% more than in the first half of last year. Experts predict further increases and rail operators are rubbing their hands with glee. 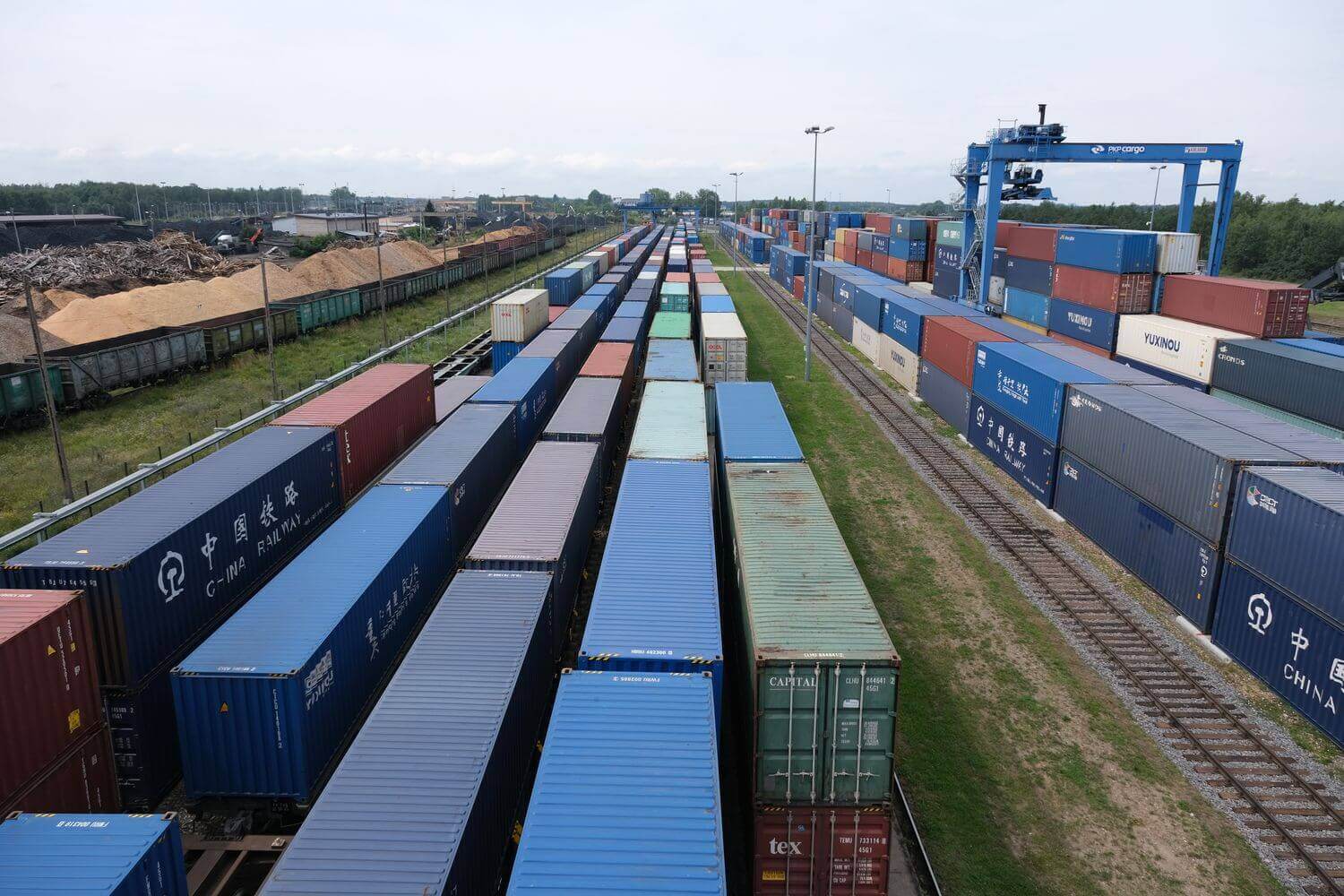 In 2020, the reason for the surge in container transit on routes from China to Europe and back was the pandemic that disrupted global supply chains and congested ports. This has resulted in a significant increase in sea freight rates and an increase in rail freight activity. As it turns out, this trend is continuing and the railway is recording further increases. This is reported by the company of Belarusian, Kazakh and Russian railways – UTLC ERA.

According to experts, this is not surprising – the price situation in the sea freight market has not improved, and rail routes through Eurasian corridors have shown increased capacity. A new terminal was opened this year in the immediate vicinity of Dostyk station in Kazakhstan. Investment in the development of multimodal transport through the ports of the Kaliningrad region is also increasing. The pandemic has also shown that congestion in the corridors does not last long. Meanwhile, they too may soon disappear.

Most trains from China to Europe pass through Poland, via the Terespol-Malaszewicze crossing. As this point has already reached maximum capacity, modernisation of the railway terminal in Malaszewicze is necessary.

“Increasing border transshipment capacity is becoming a necessity. Last year, thanks to EU funding, the modernisation of the railway terminal in Malaszewicze began, which includes the expansion of storage and transfer areas and the purchase of new equipment. Thanks to the reorganisation, the number of trains operated increases and the handling time decreases,” points out Ewa Trochimiuk, rail transport manager at AsstrA.

The green light has also been given to the Malaszewicze Logistics Park. The investment involves the construction of a modern transshipment hub that could take trains of 1,050 metres instead of the current 750 metres. The track upgrade will increase the speed of the sets from the current 20 km/h to 40 km/h.

Cargotor has confirmed that the new logistics park being built on the current dry port, which will quadruple its capacity after expansion, will become one of the most important transshipment points along the New Silk Road route. This further increases the attractiveness of rail freight.

“The pandemic has shown a great deal. Above all, it has revealed all the weaknesses of international trade flows using air and, in part, maritime transport (…). The pandemic will provide long-term support for Europe-Asia rail transport. Many companies and importers have switched to rail and gained confidence in this transport. After the pandemic, some of them will probably return to their previous solutions, but others will stay with the railways,” Jakub Jakóbowski of the Centre for Eastern Studies told Trans.INFO last year.

Borders have long been a weak link in Eurasian trade flows. However, over the past few years, congestion has occurred mainly during periodic surges. Efforts to reduce bottlenecks show that disruptions to international supply chains can easily be avoided. This is evidenced by the increases in rail transit volumes from China to the EU.

Source: own elaboration based on UTLC ERA data

Furthermore, the train load factor has changed significantly. This year, on all routes, the proportion of empty containers has fallen to 6%, and on routes from the European Union to China, to 14%. As a reminder, back in 2017, trains from the EU to China were running at 46% empty and this situation continued into 2019. The change came last year, when the level of empty containers fell by half, to 20.6%.

Alexei Grom, CEO of UTLC ERA operator, says that Eurasian routes are growing year on year, which can be seen, for example, in the increasingly diverse categories of products transported, currently more than 100.

“Three years ago, the main group of goods shipped from China to Europe was electronics, means of transport and car parts, which at that time accounted for 80% of all cargo carried. In the first half of this year, these three types of goods accounted for some 40%,” said Alexei Grom.

Grom reports that relatively cheap products such as wood, plastic, textile and rubber products have joined the group of expensive goods. “Cargoes whose value is comparable to the cost of transportation alone have started to be shipped,” he said.

He believes shippers continue to choose rail because of the reliability and safety of rail transport, which was fully tested during the COVID-19 pandemic.

“We are able to deliver medical and protective equipment on time even during the most difficult times. The railway became a link, delivering goods to different parts of the world. For many companies trading in Europe and China, it has become a real alternative to sea and road transport,” stressed Alexei Grom.

As many as 59 new routes were added to the Eurasian corridors in the first half of the year: 15 in the Europe-China direction and 44 from China to the EU. The main routes to Europe are:

In the direction of China, the following connections are leading the way:

The Kaliningrad region, according to UTLC ERA experts, has become one of the most important directions of the Eurasian venture. Cargo from the region’s ports goes to Scandinavian, German and British ports. This year, the volume of traffic through Kaliningrad amounted to 39,900 TEUs – an increase of 732% compared to H1 2020.

Anton Alikhanov, governor of the Kaliningrad region, noted that interest in the region’s transit opportunities is growing, not least because “it is the only region that can top up its wagons and attach them to trains moving along the New Silk Road corridors.”

“As a result, goods from China to Kaliningrad can be delivered within 10 days, although the fastest container ships travel by sea for 40 and sometimes even 60 days,” Anton Alikhanov said in an interview with RBK.

According to Andrei Barkov, CEO of operator Mann Lines CJSC, which offers RORO services between the UK, Northern Europe, the Baltics and Scandinavia, the Kaliningrad region is strengthening its position in the region by expanding transit destinations.

“Initially, companies along the New Silk Road worked for three European ports – Rostock, Mukran (Sassnitz – ed.) and Hamburg. However, now cargoes are sent to the ports of Oslo, Helsinki and the main Danish ports. Shipping to other Scandinavian ports, as well as to England, will develop in the near future. This will result in a significant increase in container traffic through the Kaliningrad region,” said Andrei Barkov.

However, Malaszewicze remains the main transport gateway for container traffic from China to Europe and back. Only the volume of goods flow on the individual routes connecting at the border with Poland changes. The Dostyk corridor accounted for 86.9% of TEUs transported in the first half of this year. However, it should be noted that the share of this route decreased by more than 4%. Transit through the Naushki border crossing showed a significant increase – from 7,000 TEUs to 22,500 TEUs (6.4% share). The third position is taken by Zabaykalsk – 21,000 TEUs with a share of 5.9%. 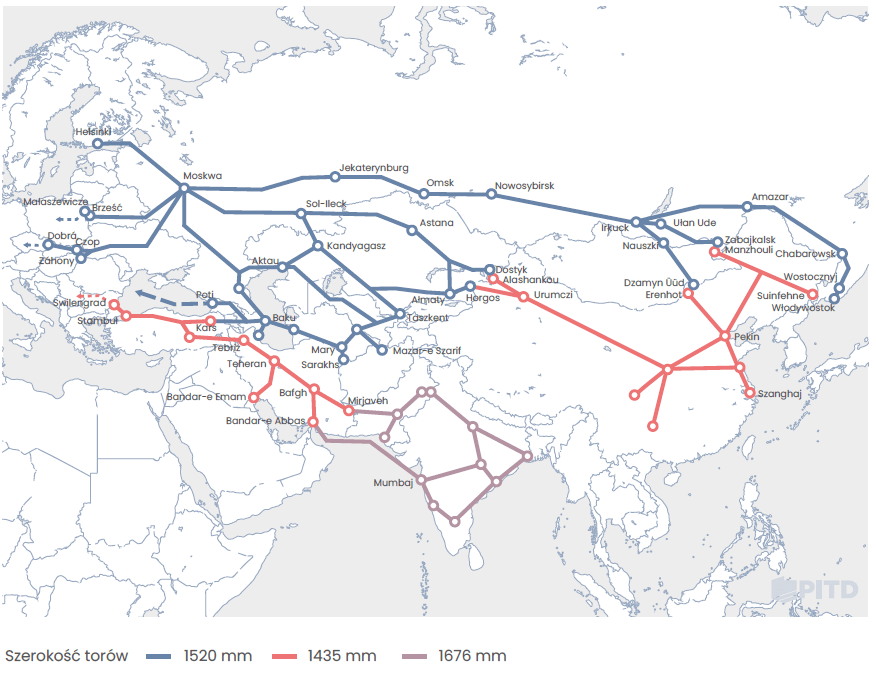 Priority is given to routes to the UK

Alexei Grom of UTLC ERA announces that one of the railway company’s priorities is to establish direct transit links from China to the UK.

“We hold meetings with clients almost every week to plan the work for future periods. This is particularly important during seasonal growth and weather-related problems. The next meeting is scheduled for November. It will be held with transport companies and cargo bidders in the UK,” Alexei Grom said.

Shipments from China to the UK have already begun. In the third quarter, the number of trains in this direction exceeded 20 sets.

We believe that the demand can be much higher, and the multimodal corridor through the Baltic Sea ports can interest more companies offering cargo,” said Alexei Grom.

The port of Kaliningrad is to play a major role in this endeavour. The first China-UK multimodal container transit took place in March this year. A train set loaded with fifty 40-foot containers travelled from the Chinese city of Xi’an to the commercial seaport of Kaliningrad. Here the containers were transshipped onto a ship and arrived at the port of Immingham in the UK.

The new route is able to meet the demand of all UK consumers for goods from Asia, creating an alternative to shipping by sea, according to organisers. The connection also provides for reverse services from the Isles to China.

In a stable period, the cost of shipping a container from China to the UK is around $4,600. This is almost twice as expensive as by sea, but much faster (transport takes about 17 days, while by sea – up to two months). For many businesses, this is the best option (for example, air transport from China takes 3 days but costs 70% more). While it is true that Brexit somewhat complicates the organisation of transport, the interest of Chinese manufacturers in expanding into English markets is very high, so the development of supply chains in these relations is certain.

UTLC ERA experts expect improved operational efficiency to be a new factor in the competitiveness of routes on the New Silk Road against other modes of transport.

“The prospect is the use of smart container sealing systems aimed at increasing the security of goods,” informs the rail operator.

It adds that rail is also favoured by international environmental projects, which will likely lead to a new round in the battle for supremacy between road, sea and air transport.

This is also supported by skyrocketing sea freight rates, which in October almost equalled air freight rates on routes between Europe and Asia.

Today, the difference in transport costs by sea and air is the smallest in history (…). It amounts to $5 per kg of cargo,” Topi Manner, head of Finnair airlines, said in an interview with RBK. He pointed out that this gives room for further competition between sea and air transport.

Meanwhile, analysts report that rail remains 3.5 times cheaper than sea freight. At one point last year, there was a leveling off of the two indices – the rail ERAI and the maritime WCI. “Since then, rail has been beating sea transport not only in terms of speed, but also in terms of delivery costs,” UTLK ERA reports.