„The proposals included in the Mobility Package do not solve real problems, and the effects of changes in EU regulations on the posting of workers lead to unnecessary overregulation of the market, which can be disastrous for transport,” says Ferenc Lajko, president of Waberer’s in an interview for Trans.INFO.

Maciej Maćkowiak, Trans.INFO: Soon, the discussion on the Mobility Package will start again in the European Parliament. How do you assess the proposals that appeared during the debate on this project?

Ferenc Lajko, president of Waberer’s: I still believe that road transport operations shall not be considered as posting since the mobile workers of the industry (drivers) are not posted workers because they are not living for months in a given foreign country. However, decision-makers seem to favor Western-European transportation companies’ goals instead of considering the needs of the whole road transportation sector and its proper operation. Therefore the outcome is impossible to predict.

The same applies to the ban on taking the 45 hours weekly rest in the cabin of the vehicle regardless of the lack of proper infrastructure (parking places and accommodation). The latest propositions, for instance, would like to separate the bilateral and the cross-border transport operations and apply the posted workers directive to the latter.

It is just another perfect example that the decision makers are unaware of the complexity of the international haulage sector, not to mention that the idea goes against the core principle of the free movement of goods and services within the EU. Political ambitions should not overwrite professionalism.

Have you already talked about the amendments to the Directive on Posted Workers and the Mobility Package with the heads of transport companies from western Europe? If so, how do they relate to the changes proposed by politicians?

We had informal discussions on the subject with the representatives of a few Western European transport companies and unofficially they all agreed that the results of an unnecessarily overregulated transport market can be catastrophic.

The propositions do not tackle the real problems like the fact that over 250 000 drivers are missing from the European road transport industry and at least 50 000 drivers will retire in the next 5 years in Germany alone, not to mention the lack of infrastructure for taking the drivers out of the cabin of the vehicle for the 45 hours regular weekly rest.

However, if a company tries to raise its voice against the propositions, it runs the risk of being stigmatized as a supporter of “social dumping”. It is quite unfortunate that the global competitiveness of the EU is not taken into consideration when decisions are made about the backbone of its economy, namely the transportation industry.

In March this year, you said that ultimately Waberer’s wants to have a fleet of 10,000 vehicles, out of which 1/3 is to be allocated to Poland. Recently, you have taken over Link – large player on the Polish market. What are your plans regarding Link? Will the brand stay under the current name or it will be changed?

LINK Poland with 950 employees was incorporated for 32 million Euros and taken under Waberer’s wings. By now Link is entirely integrated into our network. Link’s fleet is expanding. We can only share details about further steps, such as branding, at a later stage.

This was our first acquisition in the Polish market and positions us to capture an increasing share of this large and growing market. Link was a very attractive acquisition for us and will definitely play an important role in expanding our business across the region, reinforcing our leadership position. The performance of Link has shown sequential improvement as integration efforts continue across all areas of operation.

There are important synergies that we can realize from the acquisition in services to and from Poland. Moreover, the Polish market provides a gateway towards further job markets, e.g. Ukraine.

Do you want to diversify services by acquiring companies such as Link?

Our company pursues a conscious M&A strategy that is in line with Waberer’s strategy and the growth goals of our two main segments. In order to develop our international transportation segment, we are looking for Central-Eastern European haulage companies that can help us diversify our driver workforce and export-import needs. Primarily, we consider Polish, Czech and Slovakian transportation companies.

You recently said in the media that „these days you cannot effectively manage any transport business without immediately thinking about the price increase. Those who do not dare to raise prices will be ruined.” You also said that Weberer’s has already raised prices by 7 percent. However, raising prices by companies, primarily from Eastern Europe, will make them less competitive in terms of prices and they will lose one of their most important advantages over their competitors from France or Germany. How do you imagine this will work out for transport companies in practice?

Let me start from the beginning of a longer process that determines the sectorial players operation since years. Waberer’s has never been a ‘low cost’ supplier, it has only used its competitive advantage of competitive price combined with huge capacity and good quality. We want to keep this advantage though under the circumstances, we were forced to start repricing.

Road transport companies in Eastern Europe are concerned with several issues regarding their activities, which cause constantly decreasing capacities, that equally affect smaller and larger players along the whole process. The phenomenon will impact on the carrier, the logistics provider, the manufacturer, and the retailer, and also the average consumer who will find the shelves empty.

The road transport, freight forwarding, and the logistics sector have been continuously working with increasing operating expenses for three years. There are much fewer drivers thus more expensive workforce, insurance and transit fares are increasing along with wages of other office and storage employees which further burden industry players. Since all Eastern European road transportation companies have the same pool to hire truck drivers from and that thanks to European regulations hiring conditions start to be the same for every player.

In 2018, the tendency continues. The ever-deteriorating situation in the labor market results in salary increases of more than 10 percent. The balancing effect of low fuel prices worked just fine until last year but good times are over. Expenses are skyrocketing, diesel price rose by 10 percent in the last five months only. The future of the entire industry is hanging by the thread.

Not only profits melted but less capitalized companies close down or cut capacities because they are unable to carry the administration load caused by new Western regulations – they cannot keep up with the increase in operating and other expenses.

There are already serious disorders in the supply chain and the above-mentioned reasons pose a serious threat to the sustainability of the entire system. Waberer’s has already taken steps and started a repricing strategy which of course could be very different in terms of each client and each lane since the service portfolio is very heterogeneous.

What kind of innovations do you intend to implement in your company, both in terms of technology and management?

Organic and inorganic growth is crucial for Waberer’s together with increasing efficiency gains, digitalization and adopting cutting-edge technologies. We plan to further grow our highly diversified customer base by targeting the attractive auto and e-commerce sectors. In the regional segment, we remain focused on consolidating our position in the region through further value-accretive acquisitions.

When it comes to digitalization, we have self-developed resource optimization systems storing onboard data of entire fleet, helping route-optimization and increasing truck-load (above 91 percent in 2017).

We see the group’s future in introducing innovative solutions. We are proud of that we use our fleet efficiently, which means that on one hand Waberer’s has one of the most modern, young (less than 2,5 years old on average) and environmentally-sound (with EURO 6 engines) fleet.

We are close to work with various storage automation solutions among recoverable investments.

Do you have plans for example to build your own warehouses and distribution centers in Europe? Or maybe you plan to expand into Eastern markets, eg Turkey, Kazakhstan, China?

We would like to extend our regional contract logistics services – like transportation, distribution, warehousing and value-added services – to the entire Central-European Region. Western-European and Far-Eastern expansion are not among our plans in the mid-term, we are focusing on the CEE region.

The interview was conducted at the „Transport of the Future” conference organized by the Employers’ Association Transport and Logistics Poland. 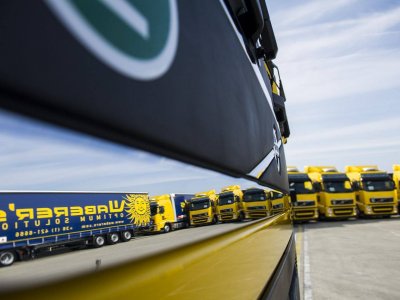 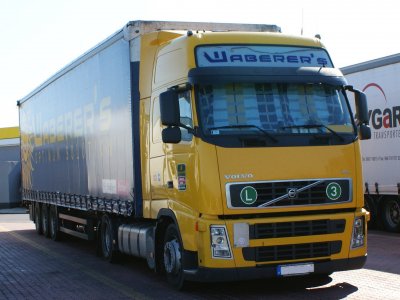 Waberer’s introduces new business model: the focus is on recurring orders
Was 2019 the year of decline for Waberer’s? The Hungarian giant continues fleet ...
Military task forces control the operations of Waberer’s