7.6k
The problem of the lack of staff in the transport industry is severe and will deepen in the coming years – according to a study published by IRU. The main reason for the crisis is the bad reputation of the driver profession and the low number of women driving trucks.

According to the IRU (International Road Transport Union), the European road transport sector is facing the most severe shortage of professional drivers for decades. The organisation has prepared a report on this subject, based on researches conducted among carriers, shippers and managers from the entire transport industry in Europe.

The surveys, carried out from October 2018 to January 2019 among members of the IRU and associated organisations in Europe, revealed a visible shortage of drivers in the freight transport sector – meaning 21 per cent. According to the association, the scale of the problem will grow, and the expected shortage will reach 40 per cent because the demand for truckers will increase further in 2019.

In the UK, the shortage of drivers, for example, increases by 50 vacancies daily. In Germany, the average age of the driver is 47 which means that by 2027, about 40 percent of them will retire, causing a staffing gap of 185 thousand employees.

Transport companies in Romania in 2018, faced a shortage of drivers amounting to 37 per cent, and in 2019, it will increase to 70 per cent if trends in the transport market carry on and the situation of human resources in the industry does not change.

In the opinion of Matthias Maedge, the general delegate of the IRU, the shortage of drivers has a visible impact on the activities of transport companies in Europe.

Unfortunately, the situation will get worse. We should not be  foolish and think that automation will solve this problem. There is still a long way to go until the road transport industry is fully automated. The partial automation, we are currently witnessing, will require a significant workforce with an increasingly diverse set of skills. This situation makes it necessary to take decisive action to attract new talents. This is a requirement now, „said Maedge in the commentary to the report.

Separation from family and working conditions are to the disadvantage.

79 per cent of the drivers surveyed by IRU  think that one of the main reasons for the lack of staff in the industry is the difficulty in attracting women to work in transport. Female drivers add only 2 percent of the employees in the European transport sector.

70 percent of the drivers claim that the reason for the shortage of drivers is the difficulty in encouraging young people to work in the industry.

Why are they not interested in this profession? As much as 57 per cent of the questioned unions and 63 per cent of the truckers believe that the main reason for this is the poor image of the profession. 76 percent of them see the problem is with the working conditions, and 76 percent votes for the too long separations from the family and staying away from home.

In addition, there is a demography of ageing employees. The average age of a truck driver in Europe is 44 years.

You have to act

According to Boris Blanche, IMU’s managing director, the transport industry must take immediate and decisive action to address the lack of drivers.

The shortage (of drivers – editorial note) without control, will have serious consequences for the European economy and will lead to an increase in costs for enterprises and consumers,” added Blanche in the commentary to the report.

„In this profession, there is no shortage of possibilities. Our research has shown that satisfaction with the job is usually high, and only 20 percent of the surveyed drivers expressed dissatisfaction with their work, „says the IMU managing director.

According to Blanche, a global effort should be made to improve the reputation of the driver profession and to fight against stereotypes. Everyone in the industry should make an effort.

It is necessary to improve the approach of drivers by providing adequate and sufficient infrastructure and facilities „- he added.

The IRU has already taken some steps to alleviate the lack of drivers in Europe. The Union has created a group of experts dealing with regulations for the training of drivers and their effectiveness. At the initiative of the association, the Women in Transport Network was established to increase the number of women in the transport sector, and to promote transport as an attractive sphere of work for women. 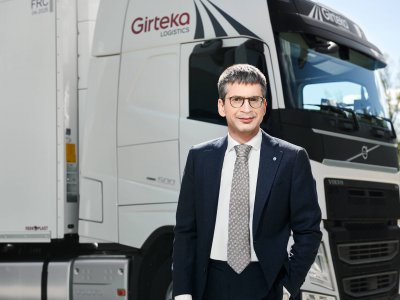 Girteka CEO: Digitisation a must for...

4 weekends with truck bans on...

Girteka CEO: Digitisation a must for profitability, competitiveness and balancin...
4 weekends with truck bans on Austrian motorways; difficulties in Italy too
Truck bans during the holiday weekend and in November
Revitalising the 20th Century. Why the future of logistics could be through repu...
A Poland – UK container shipping service has launched. Can it work?