Foldable shipping containers: a solution to empty runs or a costly curiosity?

Shipping containers have been thrust into the spotlight of logistics discussion amid the post-lockdown transportation boom sparked by demand surges. Transporting empty containers from the place of unloading to the place of loading is a costly journey in all aspects; time, money and emissions. However, several companies claim they have invented the cure to this pain; foldable containers. 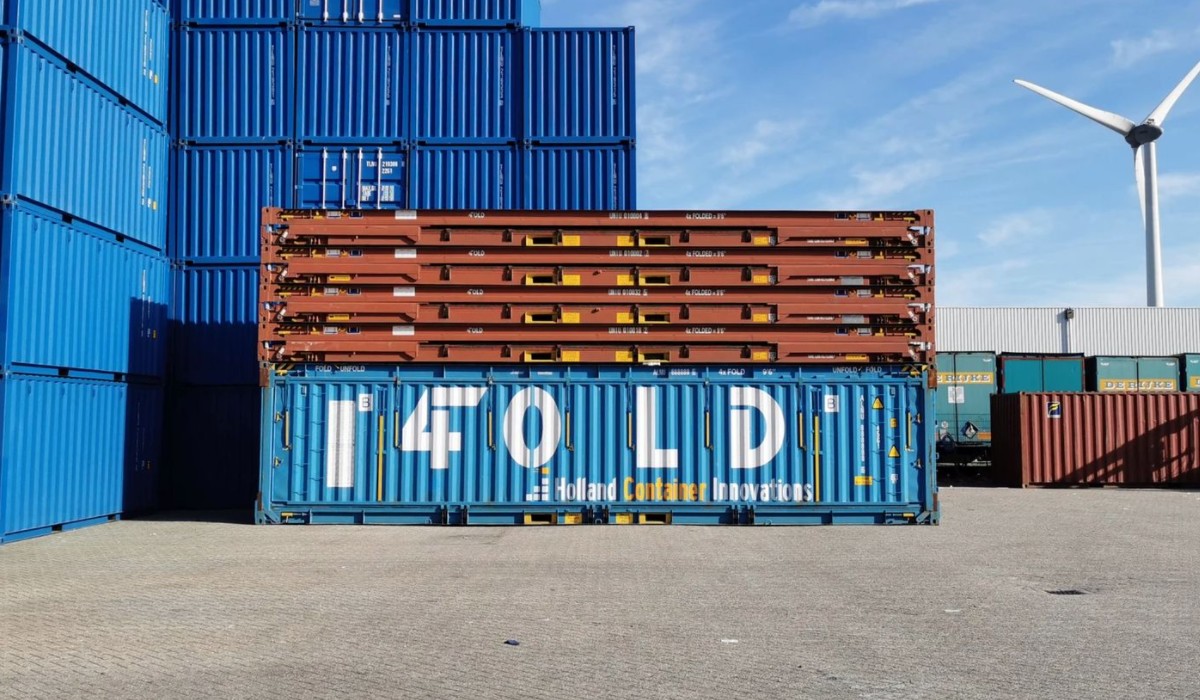 While collapsible plastic storage boxes have become everyday items not just in warehouses but also in households, the concept of foldable shipping containers hasn’t spread worldwide so far. However, the first prototype was made in 2009 by Simon Bosschieter, founder of Holland Container Innovations (now known as 4FOLD).

4FOLD foldable containers work very similarly to the collapsible boxes we know, but only bigger. A forklift lifts the roof of the container, the longer and shorter sides are folded inside, and finally the roof is let down on the top of the sides.

When a 20-feet container is folded horizontally, it takes up ¼ of the volume of an open container. As these foldable containers can be stacked upon each other, 4 times more empty shipping containers can be transported to the loading space.

However, folding horizontally is not the only way a shipping container can be folded. US-based start-up Staxxon has also come up with the idea of folding standard 20-feet shipping boxes vertically – this way five containers can be placed in the slot of one standard container.

The idea of collapsible containers is not new. At the end of the previous decade, the Cargoshell container project was developed. It was made of composite materials, thanks to which it was about a quarter lighter than traditional metal containers while maintaining adequate resistance to damage. In addition, the emission of carbon dioxide was much lower than in the production of steel containers.

Moreover, the plastic construction was supposed to facilitate its assembly. Thanks to the plastic walls, Cargoshell containers did not suppress the GPS signal, which made it easy to track the cargo. An additional benefit was that in a plastic container it is easier to maintain cleanliness and hygiene, as well as the right temperature (the material is slowly warmed up).

All these benefits, however, were not able to remedy a significant problem: the traditional container proved to be three times cheaper than the plastic one. That is precisely why the project was not disseminated.

A solution to empty runs or a costly curiosity?

According to Transmetrics, every third container being moved is empty. This means at least 60 million empty container moves every year, which costs the shipping industry nearly 20 billion USD. It is thus little surprise that shippers are constantly looking for ways to reduce this cost.

So why have foldable containers not yet revolutionised shipping?

Some critics of the technology say that foldable containers look more vulnerable to damage, so their life span will be much shorter than standard containers.

Others say the cost of foldable containers are high and with an estimated lower lifespan, it might not be worth replacing existing containers. Much like what happened in the case of the collapsible plastic containers.

What’s more, the research found that if foldable containers are used in inland intermodal operations, savings of over 60% can be achieved.