As we previously reported, a fire broke out onboard Grimaldi Lines' Euroferry Olympia on Friday, forcing the captain to make the call to abandon ship. 278 passengers and crew managed to escape, however 13 others remained onboard. Three of those persons have since been rescued, while one fatality has been confirmed. The others are still missing at the time of writing. Meanwhile, reports in Greece claim an inspection conducted last Wednesday identified a number of issues with the vessel, including “deficiencies in the operational fire safety manual". 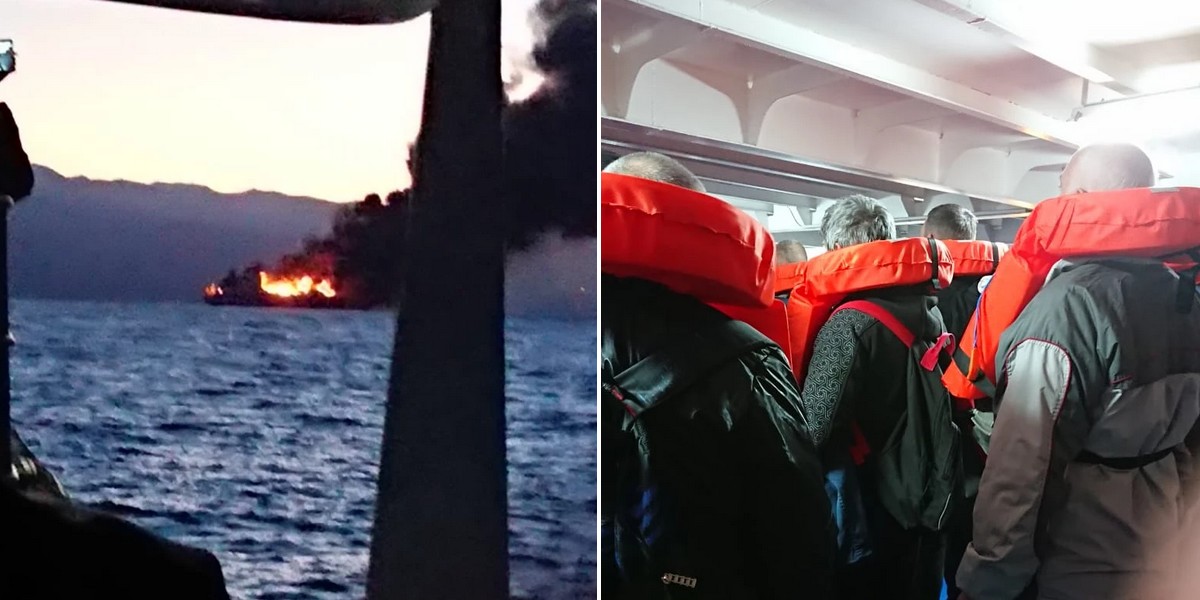 In a statement published on Friday morning, ferry operator Grimaldi Lines confirmed the nationalities of those onboard as well as the number of vehicles that were on the vessel.

“On board the ship there were 239 passengers of various nationalities, as well as 51 (Italian and Greek) crew members. In addition, the ship carries 153 commercial vehicles (trucks and trailers), as well as 32 passenger vehicles. No fuel spill has been detected at sea, nor does the stability of the ship appear to be compromised.”

In a second statement published later in the day, which confirmed that 13 persons were missing, Grimaldi Lines added that an inspection conducted on the Euroferry Olympia on February 16th had ended with a “positive outcome”.

“Last February 16, in Igoumenitsa, the Euroferry Olympia underwent a Port State Control visit, which ended with a positive outcome. The ship is subject to regular checks by the competent authorities as required by international legislation on navigation safety.”

However, Greek State Television news has since claimed the aforementioned inspection, which was unannounced and took place at the port Igoumenitsa, had seen inspectors identify “critical violations” on the ship. This included deficiencies in the vessel’s operational fire safety manual, where response actions for passengers and crew must be clearly and accurately described.

According to avgi.gr, the inspection was carried out by 4 inspectors instead of the usual 2, which the Greek paper speculates may have been a sign that the authorities had already identified problems on the ship.

The issues flagged by inspectors were reportedly as follows:

Despite the above, the ship was given 14 days to address the issues above and allowed to continue sailing in the meantime.

The ship is registered under the Italian flag and thus it is the responsibility of the Italian authorities to monitor and enforce compliance with technical and health and safety requirements. However, the authorities of the ports where the vessel docks also have the ability to conduct inspections and prohibit sailing.

“Inspections may be carried out, but without vehicles inside the ship. One car is next to the other, so that as many trucks as possible can enter the garage. In the event of a fire, someone must be able to reach a fire extinguisher or a hose to extinguish it at the beginning.”

Following the initial evacuation of the ship, a Bulgarian citizen and an Afghan citizen were rescued later on Friday and promptly transported to the hospital of Corfu for a medical check-up. Yesterday, a 21-year old Belarusian was also rescued. He was found suffering from dehydration but without any serious burns or injuries.

Tragically, a 58-year-old lorry driver was not so lucky; his body was found his cabin yesterday. Ten others remain unaccounted for, and although the chances of survivors being found declines over time, there is hope that more people can be found alive.

The ship’s captain, Vincenzo Meglio, hasn’t ruled out the possibility of some people jumping overboard in panic, or getting caught in the fire while trying to recover valuables from their vehicles.

As quoted by La Sicilia, the captain said:

“I do not exclude that out of fear someone decided to dive into the sea or that they went away without notifying anyone from the crew, so as to retrieve some personal belongings from the cabin, and were never able to return.”

Meanwhile, Templar European Logistics, who had 3 trucks and drivers onboard the Euroferry Olympia (the drivers all escaped unharmed), has taken to social media to slam Grimaldi Lines’ lack of support in the aftermath of the fire. The owner of the haulage firm has described the treatment it had received from Grimaldi Lines as “shocking” and vowed never to use its services again.