On Tuesday, Leicestershire Roads Policing Unit issued a ticket to a lorry driver who had parked on the hard shoulder after being unable to find a space at a lorry park. In their tweet, officers appeared to show their surprise at the trucker feeling the punishment was unfair, and implied that the driver had not planned his journey well enough. However, the tweet did not go down well with some social media users. In many respects, the whole debacle appears to epitomize the UK's problems when it comes to the driver shortage and lorry parking facilities. 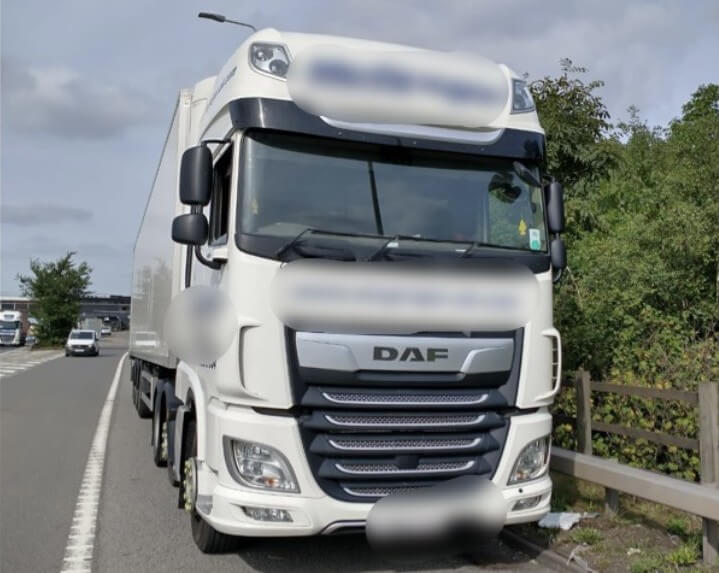 Explaining why the driver had been given a ticket, the police said that a lack of parking spaces was no excuse for parking on the hard shoulder. In the same tweet, officers also used an exclamation mark to express their shock at the fact the driver had said he would contact his MP about the situation. The message then finished with the sentence “Perhaps wait for a space in the lorry park or plan your journey better.”

If lorry park is busy or full, it’s not an excuse to park & take your break on the hard shoulder. This driver is writing to his MP, as he doesn’t feel it’s fair to have been issued a ticket! Perhaps wait for a space in the lorry park or plan your journey better. #RPU #safety 332 pic.twitter.com/wfJ6QW6zlu

The tweet generated a lively debate between lorry drivers, with some agreeing that the police were right to issue the ticket due to the trucker’s lack of planning.

One of those who felt the police did the right thing tweeted “When you get to 4 hours driving, you start planning where to take your break. Not at 4 hours 20, or whatever. And everyone knows that you don’t take it on the hard shoulder, regardless of the situation. No good complaining as you deliberately made that decision.”

Another who had a similar opinion simply wrote “No excuse, don’t wait till last minute”.

However, there were plenty of social media users who came to the defence of the lorry driver that received the ticket.

One user tweeted “Impossible to plan ahead, parking is not readily available for HGVs, sounds like he was in a catch 22 situation and took the lesser option not to go over his hours, which could have cost him his job.”

Another replied “Understand your point but HGV drivers are under so much pressure these days and try to get as as possible before having to have there break thus leaving them enough time to complete their days work, it’s a hard one but been in that situation many times over 44 years truck driving.”

On twitter user also described the police’s statement as patronising:

“Patronising and ignorant response from the police here. This is common. Even when you do plan ahead in case your services is full, doesn’t mean your contingency plans aren’t also full. Should train some of them on class 1 if they’ve got this much spare time.

Although opinions on the police’s actions clearly vary, when it comes to the UK’s facilities for drivers, it is pretty much universally accepted that the quality and quantity of rest areas, service stations and lorry parks is nowhere near the level it should be.

In May’s Strategic Roads, Logistics and Coach Survey, which monitors the level of satisfaction with the road network run by Highways England, only 11% of those surveyed considered UK rest stops to be either “fairly good” or “very good” value for money. Of that 11%, only 1% responded “very good”.

As for the quantity of rest stops and the availability of parking spaces, things were a little better. 30% and 24% respectively answered “fairly good” or “very good”.

However, in each and every category, less than a third of the respondents responded positively to questions about the quantity, quality, security, and value for money on offer at the UK’s rest stops.

In the opinion of the Road Haulage Association, the poor quality of facilities for lorry drivers in the UK is one of the reasons behind the current driver shortage. Haulage boss Moreton Cullimore, who recently became chairman of the RHA, campaigned for better facilities back in September of last year. Cullimore’s petition nonetheless failed to generate serious traction, and although it had enough signatures to merit a response, there has been little evidence of the petition bringing about change.

Since then, a new Moto Services has opened in Rugby to a reasonably warm reception, despite some criticism about the design of the HGV parking areas. However, the overall picture has hardly changed, and truckers still clearly lament the quality of rest stops in the UK.

Yesterday, UK Transport Secretary Grant Shapps admitted that facilities needed to improve. However, he suggested that the government had been “working on conditions at truck stops for a long time.” Going by the results of the aforementioned survey, one would expect a number of drivers to dispute that claim.