Last week, MEPs voted on the revision of the posting of workers directive. The changes will yield serious consequences for companies, including transport firms. A study conducted at the request of Trans.INFO amongst entrepreneurs from several EU countries indicates that, following the amendments to the Directive, shippers from the West predict a rise in prices for transport services. Entrepreneurs from the old EU states do not want to waive their cooperation with carriers from Central and Eastern Europe. Changes in the regulations on posting, as assessed by participants of the study, will result in massive turmoil and bureaucratic hassle for transport companies.

Changes in the EU law in force, which will apply to posted workers, might contribute to serious economic consequences for the entire Union. It is already known that they will also affect the road transport sector as the new elements of the revised Directive will apply to the transport sector. This will happen after the entry into force of sector-specific rules included in the Mobility Package. The directive of 1996 shall be applicable until then – asserted the European Parliament in a press release.

Thus, it is not surprising that the companies from this industry and entrepreneurs cooperating with them believe that the new regulation will result in increased prices for transport services.

The posting of workers directive raises many concerns amongst entrepreneurs

To sum up the most important conclusions that can be drawn from the research conducted for Trans.INFO, entrepreneurs believe that the changes to the provisions on posting of workers concerning transport will have a strong impact on their businesses.

Firstly, both the representatives of the transport sector and their customers expect an increase in prices of transport services. Such an opinion prevails regardless of the respondents’ region of origin.

How will the directive affect the prices of transport services? 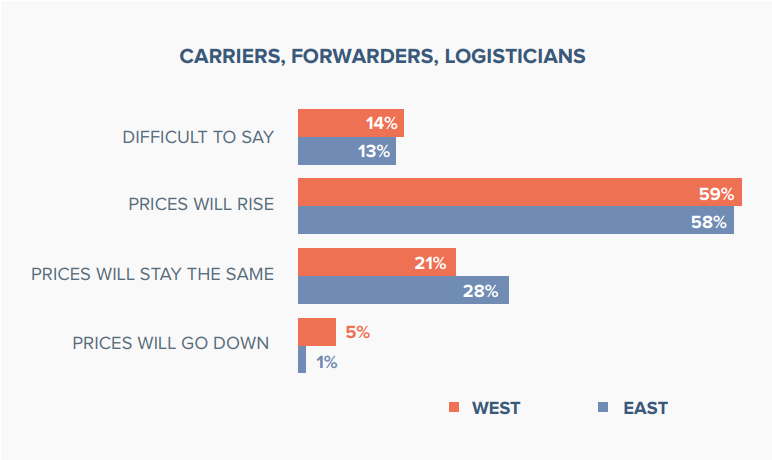 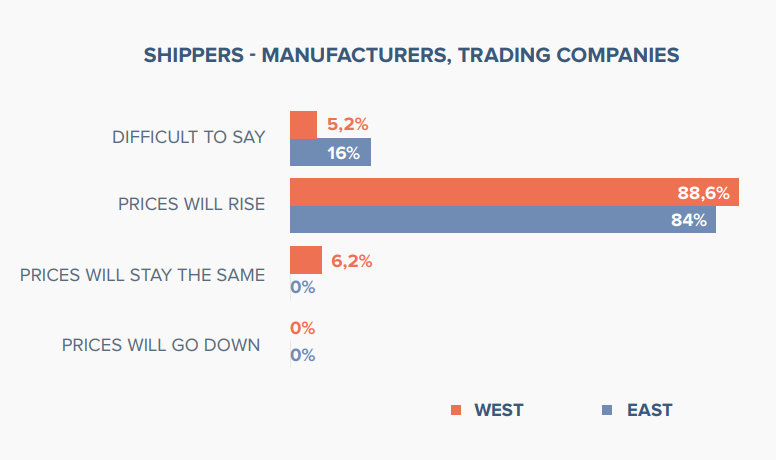 Secondly, a vast majority of respondents expect to suffer the direct effects of the new law. A large proportion of survey participants from the Eastern EU states fear an increase of administrative workload related to their business. As for the respondents from the west, only loaders (that is manufacturers and trading companies) do not expect this kind of problems.

Will the new rules result in an increase in administrative and bureaucratic workload in your company? 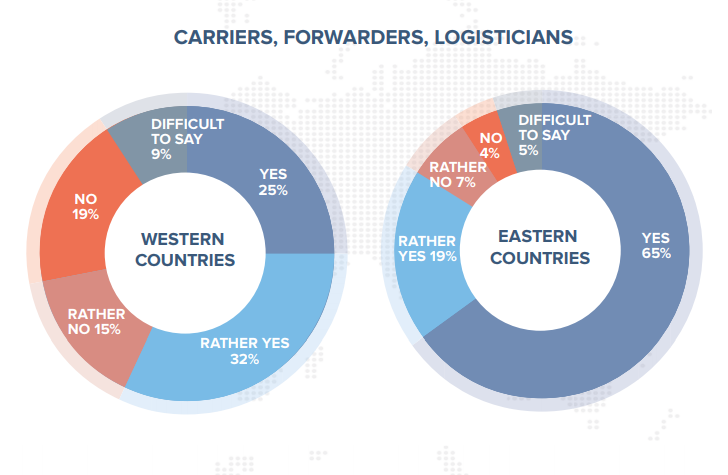 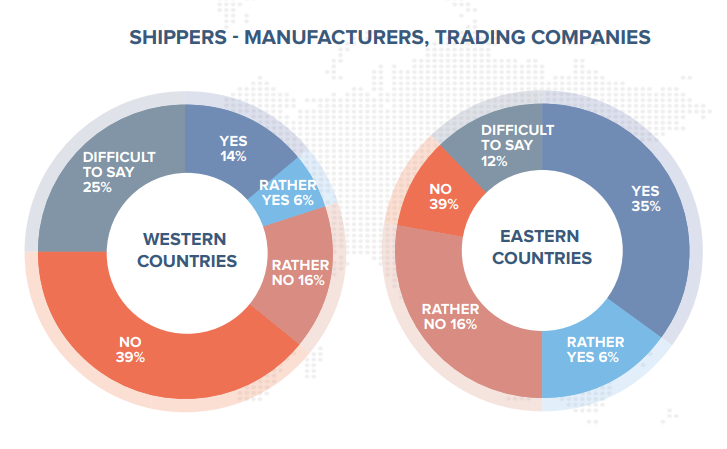 Thirdly, the majority of entrepreneurs do not see the benefits of introducing the new rules on posting of workers. It is expected by only less than one-third of carriers, shippers and logisticians from the West.

Will your company benefit from such changes? 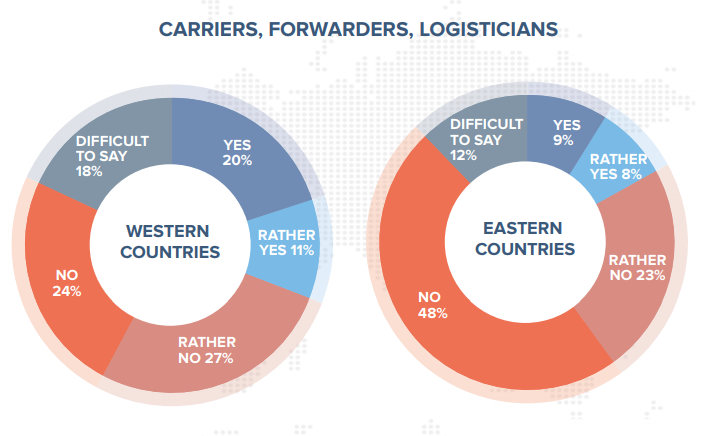 Fourthly, entrepreneurs from the old EU states are largely satisfied with the services rendered by carriers from countries of Central and Eastern Europe. They often cooperate with them due to enticing quality of services offered by the transport companies of the new Union.

What makes you inclined to cooperate with carriers from Eastern and Central Europe? 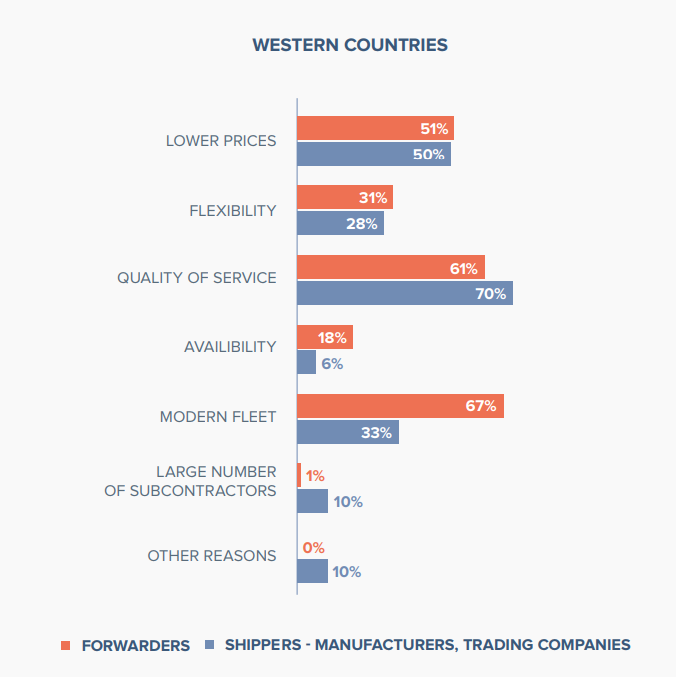 Entrepreneurs’ voice does not reach the ears of politicians

Representatives of different types of companies from the road transport sector (carriers, shippers, logistics operators) and representatives of companies that use their services, i.e. loaders, took part in the research commissioned by Trans.INFO. Participants came from over a dozen countries, both from the West and from the East of the EU, and represented business entities of different sizes.

The aim of the study was to probe how the changes in the EU legislation are perceived by companies that will be forced to adhere to the new regulations. In fact, the voice of such entrepreneurs is not sufficiently noticeable in political and media discourse. Therefore, respondents answered questions regarding the changes in the directive, as well as the possible effects on the economy in general and directly on their businesses. 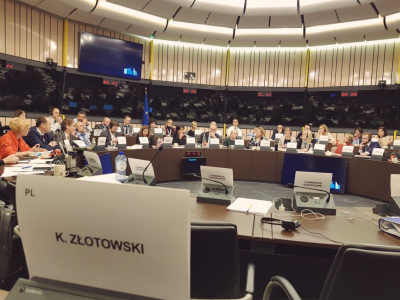 Negotiations on the Mobility Package lasted...

The EU Council approved Mobility Package regardless of the appeal by eight count...
Negotiations on the Mobility Package lasted until 3 am. “We managed to impede un...
If you want to know what the world looks like when transport is restricted, it l...