Is the carrier liable for the damage caused by a truck tipping over by the wind? German court’s judgment. 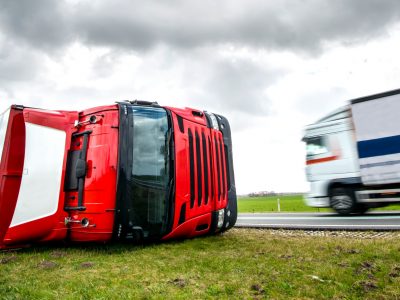 The mere fact of overturning a truck due to stormy winds does not mean a particularly serious violation of the carrier’s obligations in relation to the interests of the shipper and safety – ruled the court in Hamburg.

A shipper referred the case to court for damage to the goods caused by the overturning of the truck in strong winds. According to the shipper, the driver behaved carelessly and therefore violated his duty to the customer.

As a person claiming compensation for the damage pursuant to Article 29 of the International Convention on Contracts for the Carriage of Goods (CMR) following a road accident in international transport, the shipper of the cargo was obliged to prove the carrier’s guilt.

He would have succeeded if the carrier had blatantly compromised the security interests of the shipper. The Hamburg District Court decided, however, that no such infringement had taken place.

Recklessness is a particularly serious breach of duty in which the haulier or his truck drivers grossly neglect safety considerations. However, overturning of the vehicle is not sufficient justification to be named as negligence in this case. The driver testified in court that he noticed the wind – first, it blew forwards, but then suddenly changed direction and blew from the side. At that time, the trucker adjusted his speed to the conditions on the road, so in the opinion of the court, there was no question of recklessness.

This example shows perfectly that the protection of cargo in transport only by means of operator’s liability insurance policy (OCPD), which is based on the CMR Convention, is a significant risk – comments Adam Pająk, President of the insurance company Transbrokers.eu.

As a general rule, if the carrier is not responsible for the damage caused, it is not covered by that insurance. Pursuant to Art. 17.2 of the CMR Convention, the carrier is released from liability for damage to cargo if the loss, damage or delay was caused by the fault of the authorized person, his order not resulting from the fault of the carrier, inherent defect of the goods or circumstances which the carrier could not avoid and whose consequences he could not prevent – explains Adam Pająk.

The President of Transbrokers.eu points out that in such a situation it is essential to express the circumstances which the carrier could not avoid and the consequences of which he could not prevent. In his opinion, that was the very wording underlying the judgment of the German court.

Adam Pająk points out that the above-mentioned exclusion of liability of the carrier for possible damage to the transported cargo is formulated very generally and may also apply to accidents caused by third parties, theft damage, damage caused by immigrants, any damage caused by forces of nature, etc.

The catalogue of exclusions can be extensive. Hence the assumption – “may apply”, “may be really big”. This is where we reach the next problem. The CMR Convention refers to circumstances that the carrier could not avoid or prevent. The wording is quite general and discretionary. In this case, the carrier was surprised by a sudden gust of wind, which was unforeseeable and unavoidable. However, would the court’s ruling be the same if the carrier were aware that conditions of this kind might occur on the route in question? In fact, we do not know, because in the end it will probably be decided by the court – explains Adam Pająk.

According to the expert, it is precisely this uncertainty of insurance protection that emphasises that the cargo owner should not rely only on OCPD insurance.

In conclusion, it can be jokingly said that protecting cargo in transport with OCPD insurance is a bit like believing that the ancient Roman gods will be watching over it. Fatum is the inevitable, irreversible fate, the irrevocable will of the gods, over which no one has any influence. Hence, it is very close to Article 17(2) of the CMR Convention. If the owner of the cargo does not trust the Roman gods, he should use cargo insurance – concludes the president of Transbrokers.eu.