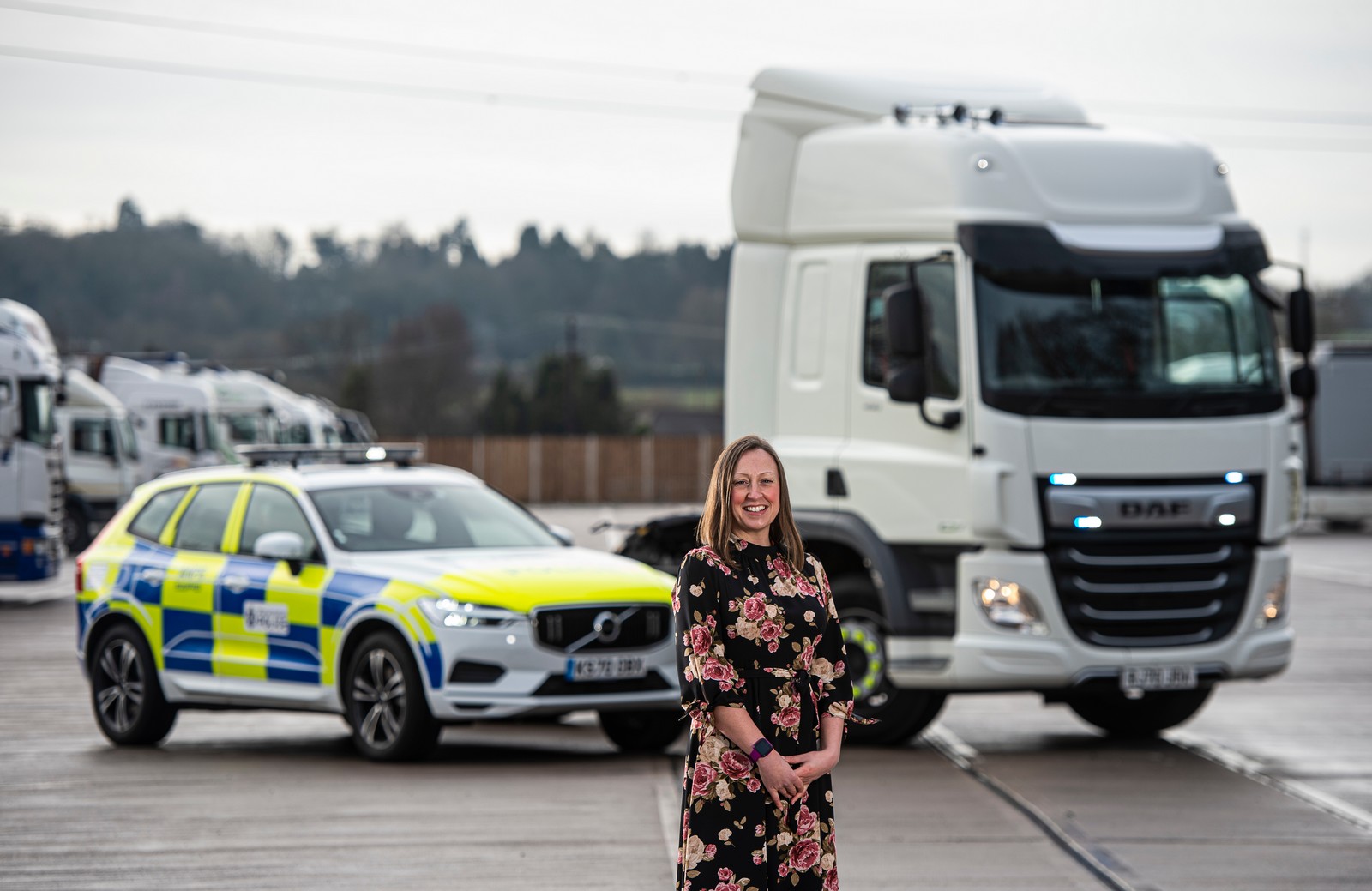 In her role as National Highways Assistant Regional Road Safety Coordinator, Marie Biddulph works with commercial vehicle drivers every day on load security. Marie is also a frequent user of social media who is keen to highlight the #showusyourload campaign designed to improve load security in the UK.

Marie’s activity on Twitter has shed light on the #showusyourload campaign and the dos and don’ts of load security in general.

Keen to learn from her knowledge and experience of conducting commercial vehicle checks, we sat down for a chat with Marie herself about her load security observations.

Thanks for taking the time to talk to us at Trans.INFO, Marie. First and foremost, what common load security issues are you and your colleagues at National Highways observing at this moment in time?

Well, one big thing is that the legislation has changed twice already this year. Many drivers have been in the same role, or with the same company for such a long time. Sometimes they fall back on that experience rather than the current legislation.

So when the police or the DVSA stop drivers at the side of the road and we’re there working in partnership with them, they may say “I’ve been doing this for 20 years”. But like everything, over time, things improve, and they get better. The same goes for legislation, so we certainly urge drivers to keep up to date with the current legislation.

In terms of things that they can look out for on their own vehicles, quite a lot of loose chains on the trailer, or items loose in the swan neck of HGVs, now need to be secure.

There also seems to be a little bit of misunderstanding about XL trailers. I think drivers and companies could sometimes do a little bit more research on that to make sure that they’re giving their drivers the best advice when using those trailers.

What do you think are the factors behind load security shortcomings? Could it be time pressure, misunderstandings concerning legislation, or even a lack of care?

For one thing, I can never say that a HGV driver doesn’t care. I think the people that we do meet on the roadside care passionately about their job and their role. As I’ve just said, perhaps one factor is that people don’t always keep up with those changes in legislation.

Some of the questions that drivers always get asked at the roadside are “What training has your company provided you with?” and “Has your transport manager given you those updates this year?”

I think in terms of time pressure, our drivers work for companies who pay them to do the walkaround checks and to secure their loads. They are afforded the time and money to do that.

How do drivers react to the load security feedback during roadside checks? Are people generally receptive and understanding, or is there occasionally some hostility?

I don’t know if I’ve just been lucky, or if this is the temperament of every driver as I would hope it would be, but I haven’t experienced any rude or hostile behaviour whatsoever.

I think the drivers that we come into contact with are hired by their employers for a reason. It’s because they are a good fit for their company and at the roadside they’re representing their company.

We are there to help them so they don’t find themselves broken down in a sticky wicket or involved in a collision of any kind. This is taken on board not only by themselves, but also the transport managers and their companies we speak to. This is all taken on board in a manner in which you would expect it to be.

And how has your experience been promoting the #showusyourload campaign on Twitter?

I have found using social media to be a really useful tool for amplifying messages on load security.

We can only post about what we see at the side of the road, whether good or bad. We always try to say great things about those that are compliant to start with.

But I think sometimes working in partnership with the police and the DVSA, and the way they work, you naturally come across more non-compliant road users than any other kind.

With respect to the #showusyourload campaign and the hashtag we use, it was the drivers themselves that came up with the hashtag when I first started talking to some of them about load security. That just tells me that they are also passionate about it and want to show what they’re doing.

We post the stuff so others can learn from those examples of people getting it wrong. Because in this day and age, you can’t reach everybody face-to-face. You’ve got to use those platforms and drivers are happy to scroll through social media on their 45 minute break.

The engagement online with us has been brilliant too. I thank the drivers that engage and share clips, because they want me to have a look at things. Just having that road user group to actually want to learn and reach out and ask for help, rather than thinking “I’ve done it for 20 years, this is how we’ve always done it,” is a really good trait for an industry to have. I do think the truckers in the UK have that mentality.

I’ve seen some speculation that there has been an increase in 3.5ton van overloads in recent times due to the HGV driver shortage. Is this something that you have observed out in the field?

I don’t know if overloading is more of an issue now than before, because I don’t have those stats at hand.

However, I think the way that we shop changed dramatically during the global pandemic. We’re relying more on home deliveries, which saw an increase in vans and small trucks being used.

I do think there may be some myths or a lack of knowledge around using those vehicle types. For example, at the roadside, we have had conversations with drivers who had thought that because they have a certain amount of space, they can fill it. However, a van will have a weight plate that you shouldn’t be going over. Some drivers are not aware of that.

So for anyone using a van or a small truck, we would ask them to have a look at their weight plate and go to a local weighbridge to weigh their vehicle before they come on the network if they have any doubts about how much they’re carrying.

What positive changes have you seen in recent years in the UK with regards to load security?

Going back to the two legislation changes we’ve had this year, many of the changes that have happened are in line with offences that police officers, DVSA Enforcement officers and the HSE themselves have seen at the side of the road. That’s where those changes have been born from.

One change in the legislation this year is around tippers not being able to load above the rigid side. They must also have a sheet over the top and not secure their load with the grab.

This follows the sad death of Steven Oscroft in Nottinghamshire in July 2020. His family from Derbyshire have campaigned successfully to have that ruling changed.

I think the family needs to be commended for getting that changed. It’s little things like that when we can all learn from someone’s past experience, whilst it won’t bring that person back, it may stop that type of incident happening again.

Anytime I see a net on the back of the three-and-a-half ton flatbed, I have a little burst in my heart. That means someone’s been stopped before and listened to what advice was given, or they follow someone on Twitter, or they’ve read the guidance.

Finally, what are your thoughts on the CPC training lorry drivers are required to attend? There has been talk of the UK amending it, while some truck drivers have even called for it to be scrapped. On the other hand, I’ve seen drivers stress that CPC is required given the lack of knowledge shown by some of their fellow professionals on social media.

From a National Highways perspective, I’ve previously worked with our commercial vehicle incident prevention team on the development of a number of CPC modules.

We have modules on smart motorways, bridge strikes, health & wellbeing, load security and many more. We’ve developed them all ourselves.

Personally, as Marie Biddulph, I think there is so much scope for training. You need to be able to develop yourself in a changing world. You won’t always carry that same load, you may not work for the same company all the time.

So we should always be looking for further training. Irrespective of whether it’s a prescribed CPC or not, you should always seek those opportunities.

Personally, I would love to see CPC bring in some more practical elements. I don’t think we’re all fit to sit in a classroom for seven hours.

Let’s get out in the yard and be looking at load security physically for the load I carry for my company. Let’s get some practical elements in there. I think that would work really well from my own personal point of view.