Lorry freight volumes on ferries between Holyhead and Dublin fell by a third in the first nine months of the year, reports The Irish Times. The paper says the reason for the decline is Brexit, as companies prefer to send their vehicles directly to the European mainland to avoid the border checks on the landbridge. As a consequence, direct ferry transport to mainland Europe has increased by 370 per cent. 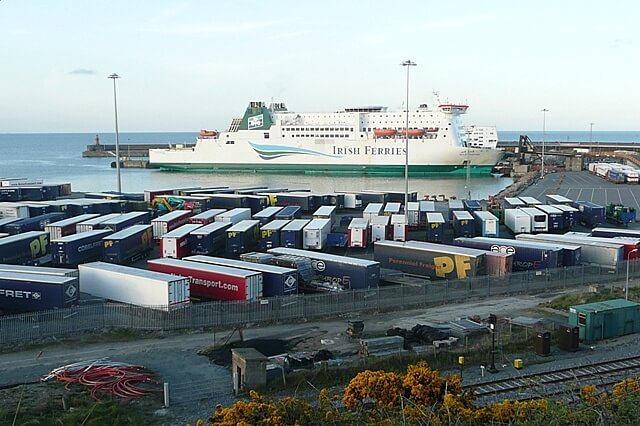 The Irish Times based its report on the yet-to-be-published Q3 figures from the Irish Maritime Development Office regarding lorry freight traffic between Ireland and Britain.

It is said that the ports of Dublin and Rosslare have recorded significant declines in lorry freight traffic between Ireland and Britain. At the same time, a surge in freight volumes has occurred on direct routes as companies do their best to avoid Britain and therefore customs controls.

According to the report, neither Dublin Port nor Rosslare Europort has experienced anything like the same disruption to shipping as in Felixstowe or other ports of Britain.

As we reported recently, port congestion in Britain has resulted in ships being diverted from Felixstowe Port, with Maersk already starting to “reroute” its ships away from the port.

This is not the case in Ireland, though. The Irish Times refers to Glenn Carr, manager of Rosslare Europort, who said the port had experienced a 30 per cent decline in lorry freight traffic on ferry services with Britain but a 370 per cent increase on direct routes.

“We are certainly not turning ships away; in fact, we have an opportunity to take in one or two more,” Carr told to The Irish Times.

Mr Carr has also spoken in detail about the situation at Rosslare Europort to Trans.INFO; stay tuned for the publication of the interview in the near future.