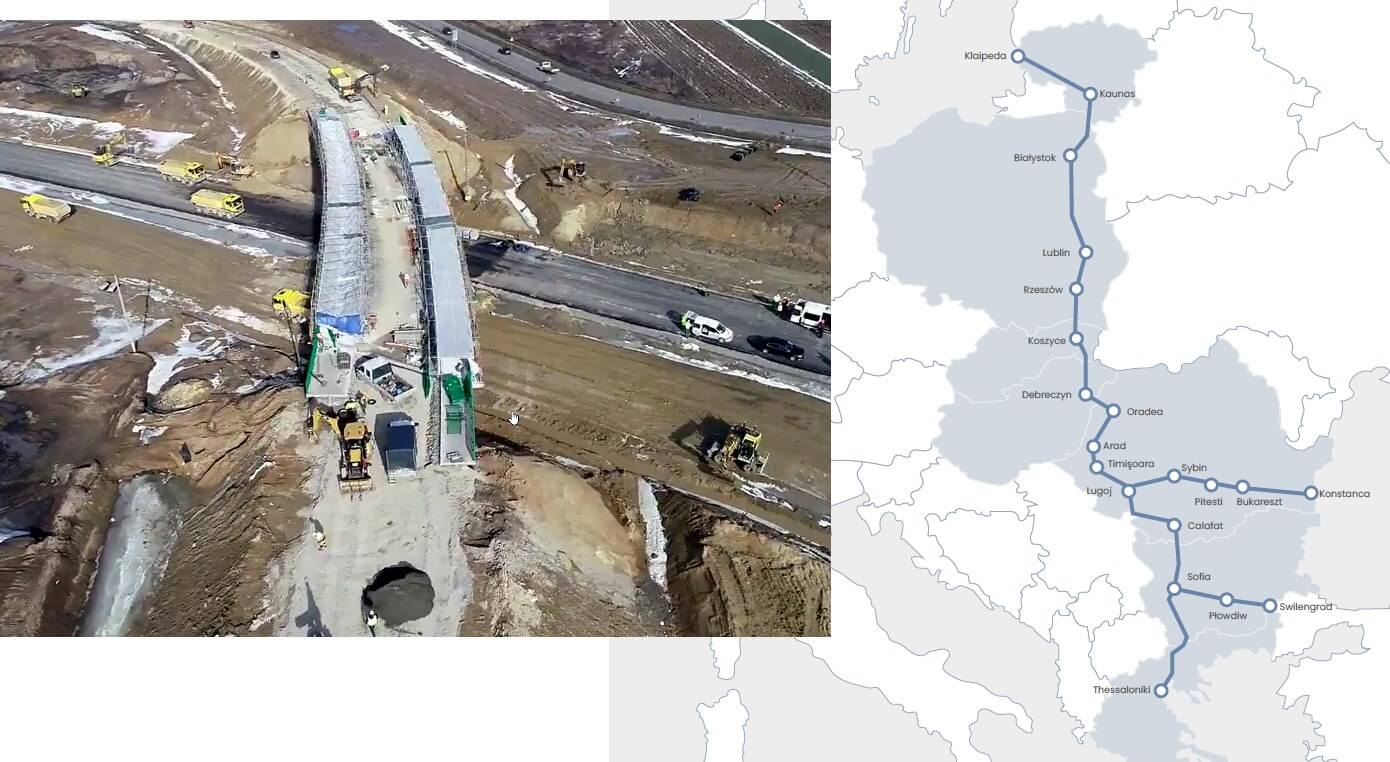 The priority of the member states of the Three Seas Initiative is a coherent and integrated infrastructure in the region, which accounts for almost a third of the area of the European Union and over 100 million consumers. This will even out the economic imbalances of the European Common Market and increase the role of Central and Eastern Europe in international trade along the New Silk Road corridors.

The Initiative has very ambitious goals. According to the European Commission, the most important objectives include increasing the region’s interconnectivity in terms of energy, infrastructure and digital communications, stimulating economic development and facilitating real convergence (e.g. economic convergence) between the EU member states. The Three Seas Initiative has a chance to connect the developed region of Western Europe and the area of emerging markets located on the periphery of the Community’s economic centre.

Dynamic economic growth is a feature of emerging markets, and the member states of the Initiative have followed a convergence path similar to that of the highly developed Asian economies over the past two decades – moving from low labour productivity to productivity close to the technological frontier. Official figures show that the Baltic States, Slovakia and Poland had similar growth to that of Japan’s economy in the 1970s and 1980s. Romania and Croatia also saw a jump.

The convergence rule is reflected in GDP growth. For the member states of the Three Seas project, economic growth has been higher than that of Germany by around 1.5 percentage points for almost 30 years. According to a report by the Polish Institute of Road Transport (PITD), over the last 15 years the highest growth rates have been recorded in Poland (5.3%), Slovakia (4.8%) and Romania (4.7%).

Currently, the GDP of the Three Seas countries is EUR 1.7 trillion. The positive performance of the project’s Member States has improved their position on the European Union’s internal market continuously since their accession to the Community. In 2004, the countries in the Three Seas area generated only 15.2% of GDP (excluding the UK), while in 2018 they already generated 19.1%. This has been influenced, among other things, by the focus on industrial production. Currently, out of the 10 EU countries with the highest share of added value generated in GDP by industry, as many as 8 countries belong to the Three Seas Initiative.

The Initiative does not yet have many achievements, but within the scope of its activities and dialogue lie several important infrastructure concepts: Via Carpatia, Via Baltica and Rail Baltica. The Initiative is also developing other regional or interregional projects – the Viking Train, a concept for the national carriers of Lithuania, Belarus and Ukraine and the ports of Klaipeda, Chernomorsk and Odessa, the Danube Fairway, the Danube-Oder-Elbe waterway or the Amber Rail Corridor, connecting Budapest, Bratislava and Ljubljana and the industrial centres of Krakow, Katowice, Warsaw and Košice.

The key project – Via Carpatia – is also one of the most important routes in the TEN-T network. The road provides a favourable north-south link along the EU’s eastern border and integrates the transport structures of Lithuania, Poland, Ukraine, Slovakia, Hungary, Romania, Bulgaria, Turkey and Greece. The concept represents great potential because of the prospect of extending the route to other countries, including the Western Balkans.

Thanks to the connection to the port of Piraeus, which is one of the most important elements of the Sea Silk Road infrastructure, the Three Seas countries – led by Poland, which is now Europe’s transshipment hub – gain an important position in trade with China. 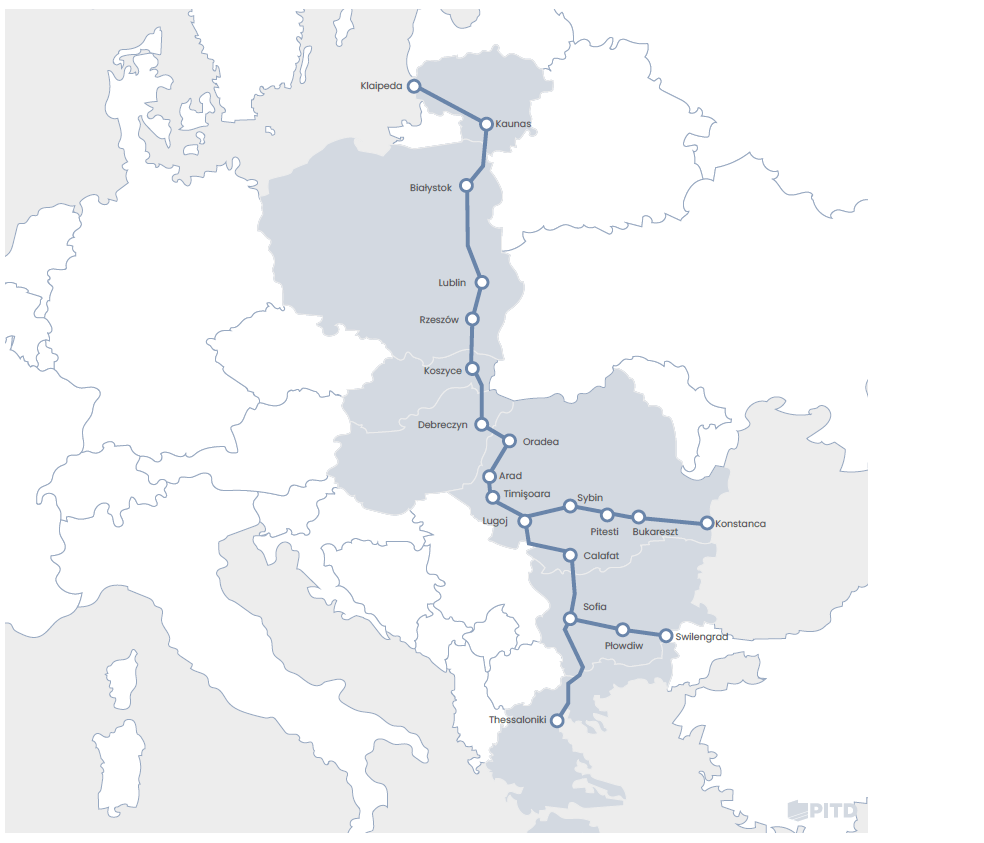 Via Carpatia road, length of over 7.7 thousand km

The Via Baltica, a route connecting Finland, Estonia, Latvia, Lithuania and Poland with the countries of Western Europe, offers great prospects for developing the flow of services and goods between northern, central and western Europe. It is part of the E67 international road, the most important road link between Poland and the Baltic States. PITD experts point out that the route will make it possible to reduce the environmental nuisance of road transport that flows from the eastern regions of Europe to Germany. Last but not least, the road is an important element of intermodal transport as it crosses railway lines and the international Rail Baltica route in Suwałki. 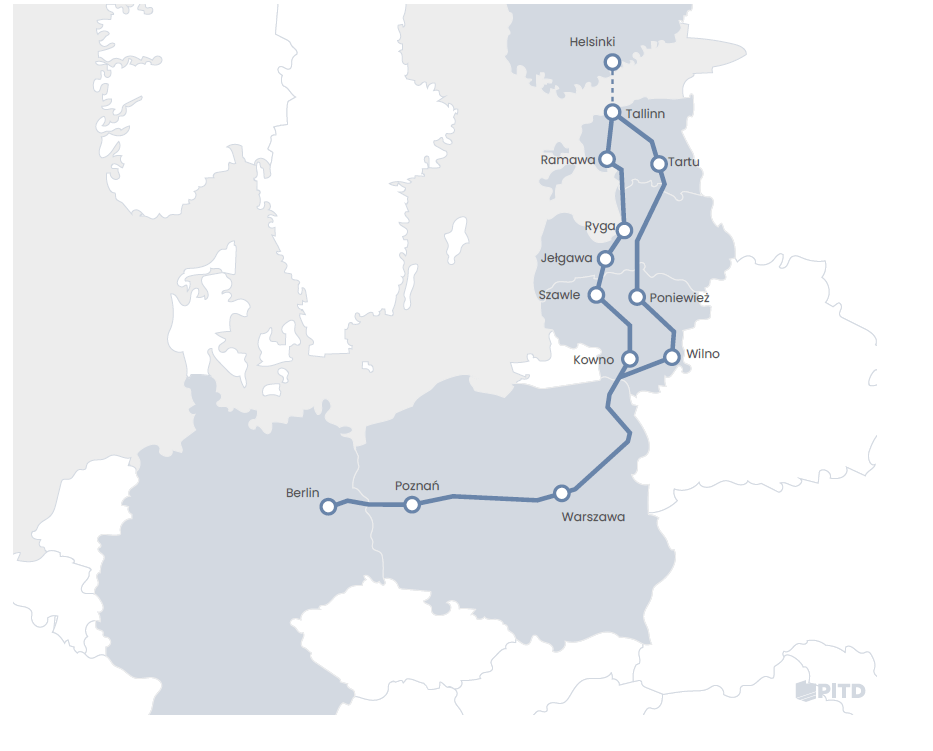 Rail Baltica in turn is designed as a high-speed conventional railway line. The current plan is for the line to run through Poland, Lithuania, Latvia, Estonia and Finland. Several transshipment terminals will be built along the route. According to the authors of the report, the largest will be in Kaunas in Lithuania, Salaspils in Latvia and Muuga in Estonia. Implementation of the project will ensure multimodal connections between sea, rail and road transport among all participants in the concept. 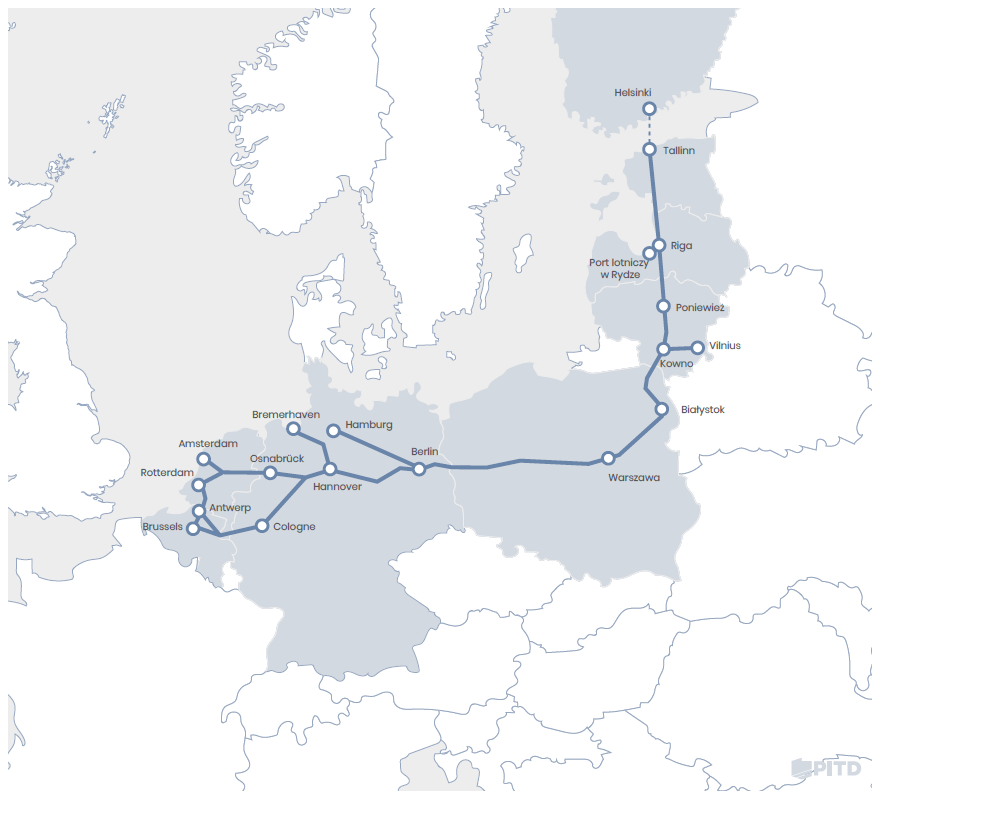 Rail Baltica route and its connection to Western Europe

The development of the Member States is based on the principles of sustainable economic development. The main priorities of the initiative are considered to be improving transport and intermodal links, meeting the demands of European energy and environmental policy and promoting the business case for projects. To this end, the Three Seas Initiative Investment Fund was established, which plans to raise between €3 and €5 billion to complement EU programmes and increase the competitiveness of the countries in the Three Seas region.