Opposition towards France’s mandatory blind spot stickers is growing across Europe. After the GBL outlined their disapproval in Germany, the transport association of the Netherlands has followed suit. British-owned hauliers have openly criticised the stickers too.

“If this serves safety, we have nothing against it. On the contrary, we’d be all for it. But this regulation has been rudely introduced by the French, and you can really question its effect on security.” – van den Brink was quoted on AD.nl.

The manager argues that many buses and trucks are already full of advertisements. As a consequence, by the time people see the blind spot sticker, the accident has already happened. Also, there are many large transportation vehicles that companies cannot easily fasten the stickers to, he adds.

British hauliers also against the stickers

Several British transportation companies also find the stickers annoying.  Templar European Logistics, for example, labelled them stupid. The “let alone the French” reference on their Facebook page may not endear their French customers, however.

As we have reported earlier, Germany’s Federal Association of Freight Transport, Logistics and Waste Disposal (BGL) is reportedly looking into legal mechanisms it can use against the obligation to have blind spot stickers on trucks in France. According to eurotransport.de, the BGL’s move also has the backing of France’s road transport association, the FNTR.

We are not convinced that these stickers are useful for road safety. They don’t do anything – said BGL board spokesman Prof. Dr. Dirk Engelhardt.

At the same time, reports from Spain say that the country’s road transport authority, the DGT, is planning to follow France in introducing a standard for signaling HGV blind spots. 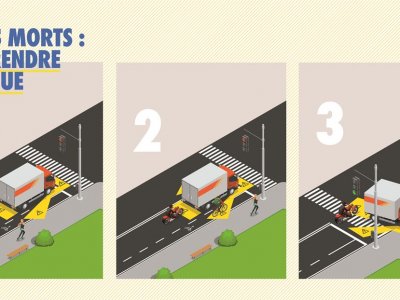