Oversized transport and logistics, or how and with what to carry oversized goods? 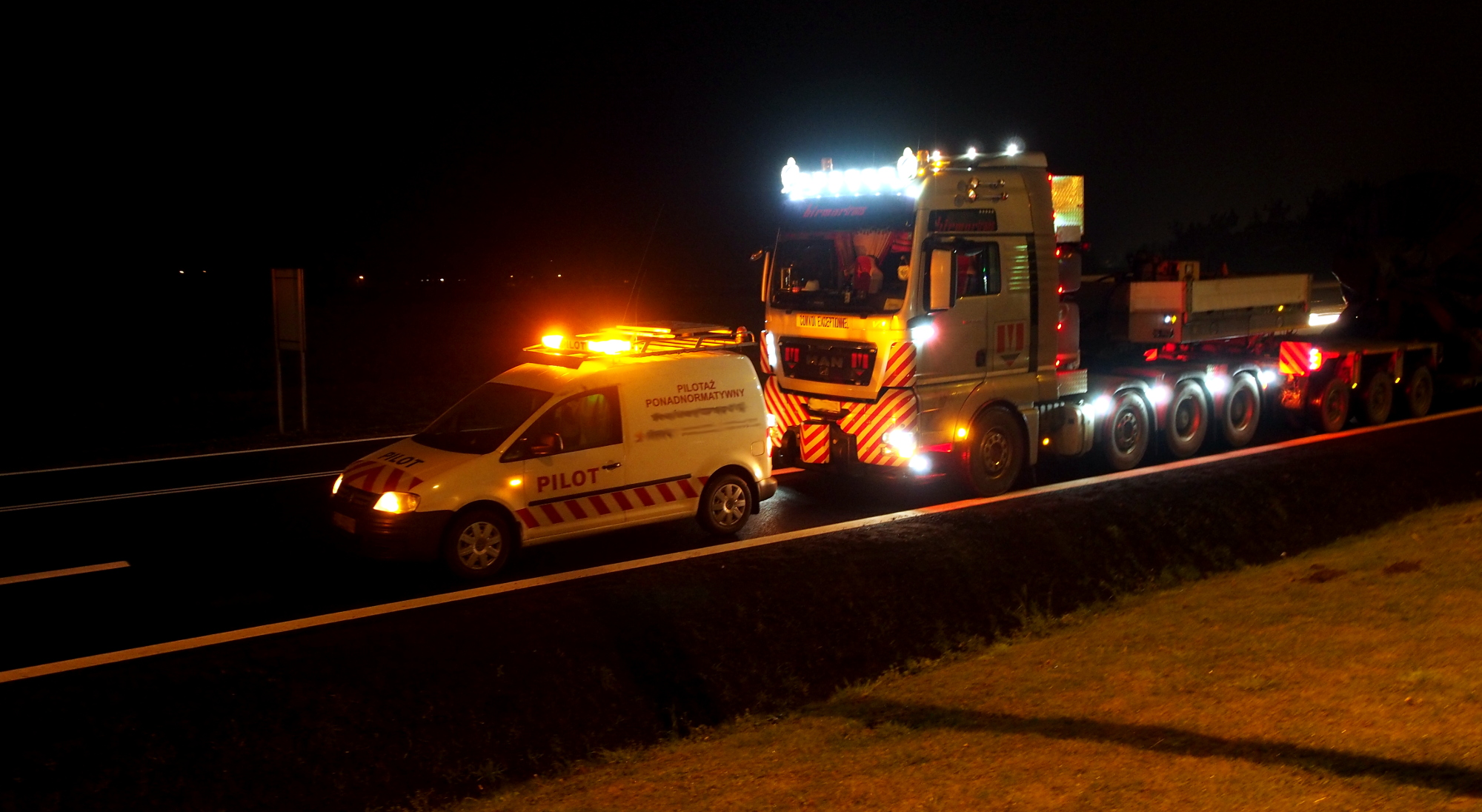 The need to transport heavy or bulky goods to their destination can be quite a problem. Low bed trailers and semi-trailers are used for this purpose, i.e. the basic means of transport for oversized goods. It is important to use optimal loading and unloading methods.

The common feature of low bed vehicles is their solid frame construction, which allows them to safely carry heavy loads, regardless of road conditions (high-strength steel). The option of trailers and semi-trailers is made possible by simple one-axle vehicles, but on the roads, we usually find three-axle and four-axle vehicles, used mainly for the transportation of excavators, loaders, or rollers. In the transportation of particularly large loads, multi-axle vehicles are used, often with the possibility of multiple extensions.

Low bed semi-trailers with a balcony and a lower, usually retractable baseload deck are the most common.

Also popular are platforms with a completely flat cargo deck (there are also tele platforms with a single, double, triple or quadruple stretch), as well as tiefbett trailers with an extendable cargo deck just above the roadway, below the deck with a bogie. Modular constructions are also available, and thanks to the combination of these modules – i.e. bogies with two, three, four, five or six independently suspended axles – it is possible to transport loads weighing several hundred or even several thousand tons.

They are 2 to 6-axle flat deck semi-trailers that are extendable up to four times to 64 m. Due to their telescopic loading area, TeleMAX semi-trailers are suitable for the transportation of particularly long and bulky loads, e.g. wind installations (tower segments, generators, rotor blades or turbines) or building structures (steel and concrete elements).

The manufacturer points to the relatively low unladen weight of the semi-trailer and its high manoeuvrability. TeleMAX can be equipped with hydraulic or pneumatic suspension as required. Different systems can be used as steering systems: rigid axles, friction-steered axles, knuckle-steering (hydraulic) axles, pendle axles.

TeleMAX equipment and accessories are selected according to the needs resulting from the transport conditions. Here are just a few of the options available: extendable up to 4x, cranked loading platform, hydraulic support with roller feet, hydraulic gooseneck, stanchion posts made of concrete.

Demarko Special Trailers offer includes several dozen types of semi-trailers with a load capacity ranging from 20 to over 100 t.

Extendable (one, two or even four times) structures with two to eight axles are most often ordered. The dimensions of the semi-trailer are adjusted to the EU requirements as standard. Often, semi-trailers with decks up to 40 m long leave the factory in Bytom. In each case, they can be extended and widened many times and are equipped with freely configurable axles: fixed, torsional or with hydraulically forced steering, controlled wirelessly, by remote control. It is possible to order a semi-trailer with special cavities, e.g. for wheels or buckets of transported machines.

Semi-trailer decks are supplied with special handles to which belts, chains, etc. are attached. The upper deck is also suitable for transporting smaller machines, placed on the balcony by crane or by means of special optional ramps. Ten-axle or even twelve-axle semi-trailers are ordered less frequently. The ST-series is the most popular series of Demarko Special Trailers. The modular design enables multiple length and width extensions. When the semi-trailer is extended, its functionality is ensured by, for example, an intermediate table that, depending on the dimensions, may be equipped with stanchion sockets, telescopic width extensions and even cavities.

Low bed trailers are an alternative to semi-trailers. KH Kipper has P2N, P3N trailers for transporting machines. A trailer with two or three centrally located axles with a load capacity of 9 or 11 tons each (BPW, SAF or other) has as standard hydraulically lowered rear ramps, a large number of load hooking points and spacious aluminium toolboxes. The highest quality materials are used in vehicle construction for the durability of the products. The trailer frame is a welded construction, made of high-quality steel, protected against corrosion. The trailer has a useful length of approx. 8 m. On request, products of other dimensions and specifications can be manufactured to meet individual customer requirements. Aluminum sides are available as an option.

Emtech’s offer includes, among others, a four-axle low bed trailer with a turntable and a sunken deck on the edge.

Height of the loading chassis: above the turntable 1010 mm, underdeck (341 mm), the deck above the rear axles (840 mm). The unladen weight is less than 9.5 tons. The frame is based on a welded 18G2A steel chassis. The last axle is a free steering axle. The trailer is equipped with a pneumatic suspension. The cargo deck is filled with sheet metal/grid (like in a forest trailer).

There are many spectacular challenges for companies dealing with oversized transport, such as the transportation of an aircraft. Some time ago, three Iveco Stralis tractors with Cometto specialist semi-trailers took part in the transport of a Jak-40 jet from the military airport in Mińsk Mazowiecki to the Air Force Officer’s College in Dęblin. To transport the fuselage (length 20.4 m) a two-axle, three-time extended tiefbett semi-trailer was used, while to transport the wings (length/span 25 m) – a five-axle tele semi-trailer.

Another example of non-standard orders is the transportation of elements of wind power plants.

One of the players in the turbine transport industry is A.M. Kran Wind. It has recently launched the Nooteboom Super Wing Carrier, a 3-axle semi-trailer. With these four times extendable semi-trailers, there are no problems transporting even 70-metre long turbine wings. Super Wing Carriers are available in several versions, such as the triple-axle, 3 times extendable Tele-PX with sliding axle bogie or the latest 3-axle Quatro Tele-PX. The latter is based on the MCO-PX semi low bed technology and has a much lower (extendable 4 times) cargo deck, which means that carriers can plan their routes without having to worry about the height of the load as they pass under viaducts.

Special Heavy Duty ramps were also developed to load machines weighing up to 80 t onto the cargo deck. Each of these ramps can individually transfer a point pressure of 20 t per wheel. The technical load of the 6-axle low bed extendable semi-trailer Manoovr type MPL-97-06(VU) which is 75.5 tons. Thanks to the special shape of the ramp end, the approach angle is only 10 degrees, which makes loading much easier. In addition, the back of the deck has been reinforced; on the left and right side of the excavator trough, the floor can be loaded with a weight of 30 t, i.e. 60 t in total.

The market of low bed semi-trailers also includes IT tools helpful in their operation.

Recently, Nooteboom presented, for example, NoVAB 3.0, a software tool for calculating axle loads. Thanks to the cloud service you can quickly and easily calculate optimal load positions for all vehicle combinations. The NoVAB software itself was developed more than two decades ago, in particular for international oversize transport customers. Users can select a pre-defined load or enter load data themselves. With the latest version of NoVAB 3.0 Cloud, you can select the right trailer/semi-trailer and calculate how the weight of the load is distributed between the different axles, or you can determine, for example, whether one or more axles should be lifted.

NoVAB generates a drawing of the general transport system with important axle load details and other important parameters. On the one hand, this document is useful for applying for authorisation and on the other, it can be used to instruct the driver where to place the load on a semi-trailer. The solution is a fully online tool, available all over the world. It is suitable for desktops, laptops, tablets and smartphones and helps to submit applications for permits. Free updates are introduced automatically.