The British eHighway network could pay for itself in 15 years. Truck operators could also save on fuel costs 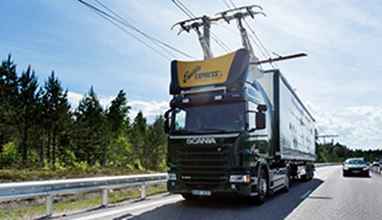 A British research has found that building a network of overhead cables and adapting lorries could pay for itself within 15 years. This £19 billion ‚e-highway’ system “could slash carbon emissions by 5%”, the study says.

The government-funded report carried out by The Centre for Sustainable Road Freight has found that building a network of overhead catenary cables along 7,500 km of the UK’s major road network would electrify approximately 65% of HGV km, at an estimated cost of £19.3b. According to the report, it is technically viable, economically attractive and could be achieved by the late 2030s.

The study states, when combined with battery electrification of urban delivery vehicles, this ‘electric road’ network would almost completely decarbonise UK road freight. The investment by vehicle owners in the pantograph electric vehicles could be paid back in 18 months, through lower energy costs. This would ensure rapid take-up by the road haulage industry.

The academists who carried out the research suggest that the improved energy efficiency of the freight system would create sufficient financial headroom for substantial government revenues through an electricity excise tax, road user charge or some other form of tax. Under some reasonable pricing scenarios, the revenues could be sufficient to entirely replace the current fuel tax levied on HGVs.

Promising pilot test in Germany, Sweden and the US

The engineering firm Siemens and the truck manufacture’s Scania have successfully carried out trials of e-highway electric road systems in Germany, Sweden and the US.

The eHighway system is twice as efficient as conventional internal combustion engines. This Siemens Mobility innovation supplies trucks with power from an overhead contact line. This reduces local air pollution and contributes significantly to the decarbonization of the transport sector” – Siemens stated this April.

The world’s first eHighway by Siemens was opened in Sweden in June 2016 on a two-kilometre stretch of the E16 highway north of Stockholm and the Swedish truck Scania had developed a new concept in commercial vehicle operation.

The second eHighway was opened in California in November 2017. Here, three Volvo trucks were adapted for the project – each with a different drive application: one all-electric and two hybrids (diesel and CNG).

In August 2017, Siemens Mobility was commissioned by the state of Hesse, Germany to build an overhead contact line for electrified freight transport on a ten-kilometre stretch of autobahn. The system was installed on the A5 autobahn between the Zeppelinheim/Cargo City Süd interchange at the Frankfurt Airport and the Darmstadt/Weiterstadt interchange.

In March 2018, a further contract was awarded by the Research and Development Center of the University Kiel for the construction of a five-kilometre eHighway on the A1 autobahn between the Reinfeld and Lübeck interchanges.

In May 2019, Germany opened the new electrified eHighway for trucks developed.

The electrification system went into effect on 10 km (6.2 miles) of autobahn, allowing trucks with the necessary equipment mounted to their roof to use the electrified cables to travel at speeds up to 90 kph (56 mpm) without needing to burn any diesel fuel, converting back to diesel-powered internal combustion once they leave the electrified stretch.

Siemens emphasizes that truck operators can save €20,000 over 100,000 km on fuel costs using their system on top of the emissions reduction from electrifying freight vehicles.