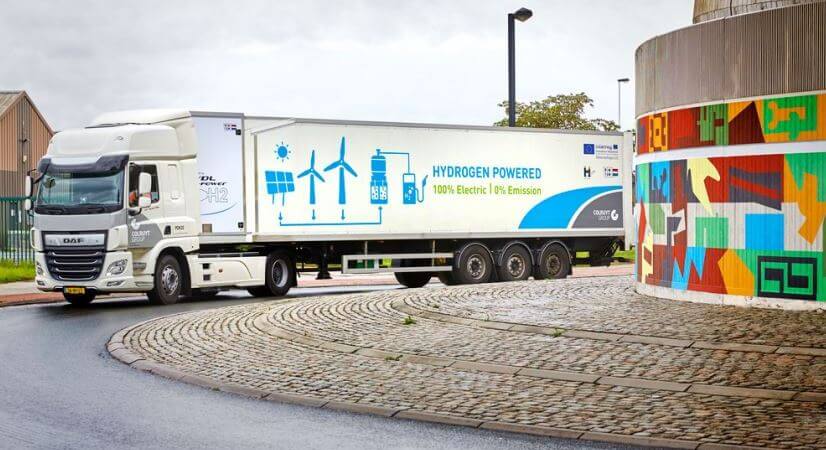 A remarkably quiet HGV with zero emissions is already on operating on European roads.  The 44 tonne heavy-duty full electric truck, which features a hydrogen “range extender”, is now being tested by family-owned Belgian retail company the Colruyt Group.

The cutting-edge zero-emission truck was developed by VDL Groep in Eindhoven, and the test is part of the European Interreg demonstration project „Hydrogen Region 2.0”.

While driving, the truck’s batteries are recharged with the electricity generated by the hydrogen fuel cell. It is not only sustainable because it uses green energy and hydrogen, but also because it can cover longer distances than other electric trucks – an important asset for freight transport.

The electric truck is equipped with a Li-ion battery and can therefore drive approximately 40 km purely electrically. In the test combination used by Colruyt Group, the tractor is coupled to a trailer with a fuel cell on board, which recharges the battery on the way.

Filled with 30 kg of hydrogen, this fuel cell or ‚range extender’ can increase the driving range of the truck by approximately 300 km” – explains the company.

As a dedicated end-user, Colruyt Group will test the hydrogen truck in its daily logistic operations. Given the diversity of the group’s activities, it will be possible to test a variety of services, including store deliveries. The test will be going on for 6 months.

Our goal is to gain knowledge and experience to prove that hydrogen technology can be used efficiently in heavy-duty logistics” – says Regine Vaneghem, Head of Transport at Colruyt.

The Colruyt Group and VDL Groep are active partners of the European Hydrogen Region 2.0 demonstration project, which aims to build up knowledge and experience with large-scale hydrogen applications in logistics.

By sharing the experience gained, Hydrogen Region 2.0 wants to inspire other major logistics centres to start using hydrogen-powered vehicles as well. This project is made possible by financial support from the European Union within the framework of the Interreg Flanders-Netherlands programme.

The Colruyt Group are not new to hydrogen-projects

Since 2004, the Colruyt Group has invested €6 million in innovative hydrogen projects. The group has been producing green hydrogen at the Dassenveld logistics site for some years now. A number of forklift trucks are hydrogen-powered in the distribution centre. In addition, hydrogen is used for 20 passenger cars, which are operational within the group.

In October 2018, the group opened the first green public hydrogen filling station: the DATS 24 station in the Zinkstraat in Halle became the first fully integrated station in Europe offering all possible kinds of fuels.

Adding this test to our track record of previous initiatives is another step in the right direction in our choice for energy transition, exactly two years after we inaugurated our hydrogen filling station” – Regine Vaneghem addds. -„It is an immense step within the innovations in heavy transport and we hope that this can be an inspiration for other companies. We, therefore, call on them to opt in full for the energy transition, with hydrogen as an important lever, and continue to plead for a stable investment climate.”