The French Customs Office advises on how to prepare for customs clearance in the event of a hard Brexit. 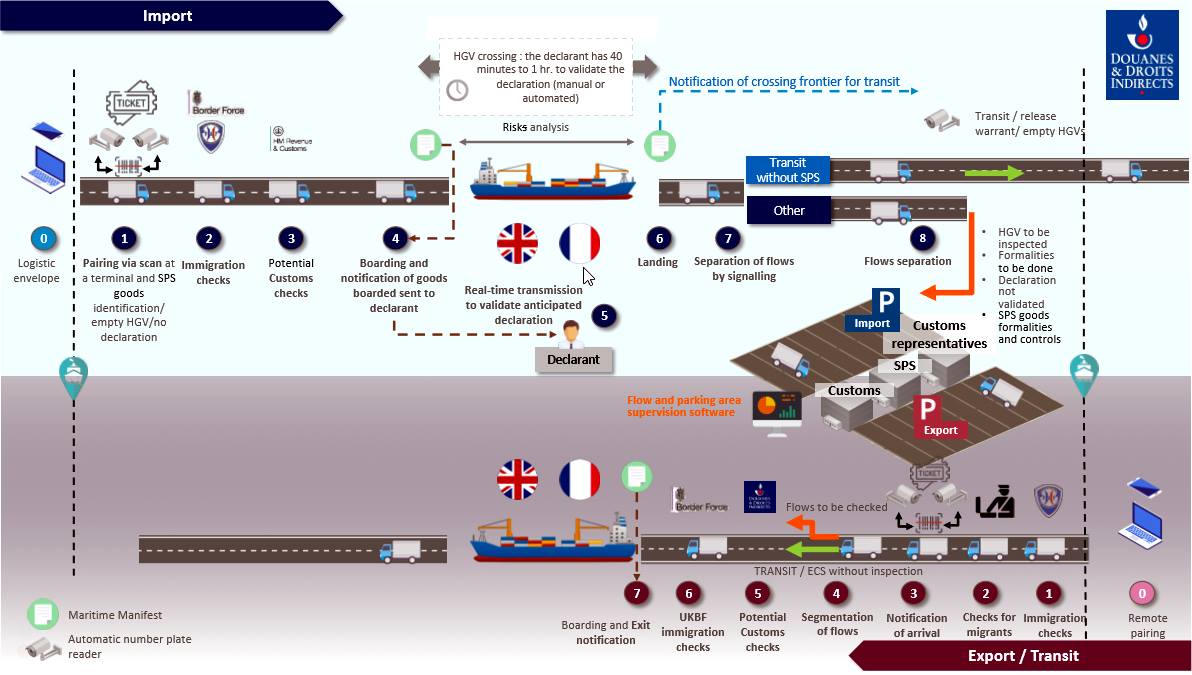 If Britain leaves the EU without an agreement, the Isles will leave the internal market and become a third country for the EU. Then different procedures will have to be applied at the border between France and the United Kingdom than hitherto. The French Customs Office has published a handbook in which you can find out how formalities will look like after hard Brexit. The UK administration ensures that transport will continue to take place without a system of permits.

Assurance from the British administration

A representative of the British Department of Transport ensured during a meeting at the British Embassy in Warsaw that the transport will take place without a system of permits, reports the Association of International Road Carriers. According to declarations, the UK services are to recognise the EU licence, the EU driving licence, the working and rest time system based on the EU regulation, as well as the certificate of professional competence. Also, the UK authorities will not prohibit cabotage in the United Kingdom.

However, as it turned out during the talks at the embassy, insurance is a problem, as the United Kingdom is currently in the green card system and it is still not clear whether it will stay there after Brexit.

Although the meeting at the embassy confirmed that a hard Brexit will not have dramatic consequences for EU carriers, they will not avoid problems related to customs procedures. Above all, the organisation of work in ports will change. Appropriate zones will be created to which carriers will be directed depending on their status of preparation to cross the border.

The green lane shall be used for transport without any formal defects, including a prepared transit declaration. The orange lane will be used by carriers without a transit declaration, with the need to confirm the export procedure or selected for possible customs or sanitary/veterinary control.

France prepared for Brexit without agreement

For several months now, French customs officials have been preparing to ensure continuity and liquidity of trade in goods between France and the UK in the event that the UK leaves the EU without an agreement,” declared in a letter annexed to the handbook Rodolphe Gintz, Director-General of the French customs authorities.

A key result of the work of the office is the “smarter border system.” It was launched on 29 March 2019 at all entry/exit points to and from the Calais region and at the border points between the English Channel and the North Sea. The “smarter border system” aims to ensure the smooth circulation of goods by enabling companies to automate the border crossing of trucks.

The guide published by the French authority is divided into sections which describe how companies have to prepare for a “no deal Brexit”.

Customs clearance procedures may be carried out:

– or by a broker acting on behalf of a company. This is called a registered customs representative, formerly known as the customs declarant or customs freight forwarder or agent.

In both cases, companies remain responsible for their customs operations.

What are the customs procedures?

– Completion of a compulsory customs declaration form which lists the goods: description of the goods (what is it), their origin (where and how they were produced) and their value,

– Application of customs duties to goods imported upon entry into the customs territory,

The guide will also tell you whether it is worthwhile to outsource customs procedures to representatives and what information you should provide them with.

In addition, the guide contains information for shippers (exporters and importers) and carriers, including the financial impact that Brexit may have on businesses. The authors of the publication explain what formalities have to be completed at the border or even earlier (in the case of exporters). The materials also indicate which goods (export/import) require additional formalities (e.g. medicines, animals, plants, alcohol, hazardous materials, etc.). The guide also describes in detail how to register a company at customs clearance.

On the website of the British government, you can find information about customs and excise procedures if the UK leaves the EU with no deal