The extension and modernization of the Port of Calais has cost a total of €863 million. However, since it opened at the end of October, truckers have been less than impressed by the facility and many say its design causes unnecessarily long queues. One well-known independent haulage firm that transports goods between Britain and Europe has even told Trans.INFO it will boycott the port until the issues are resolved. 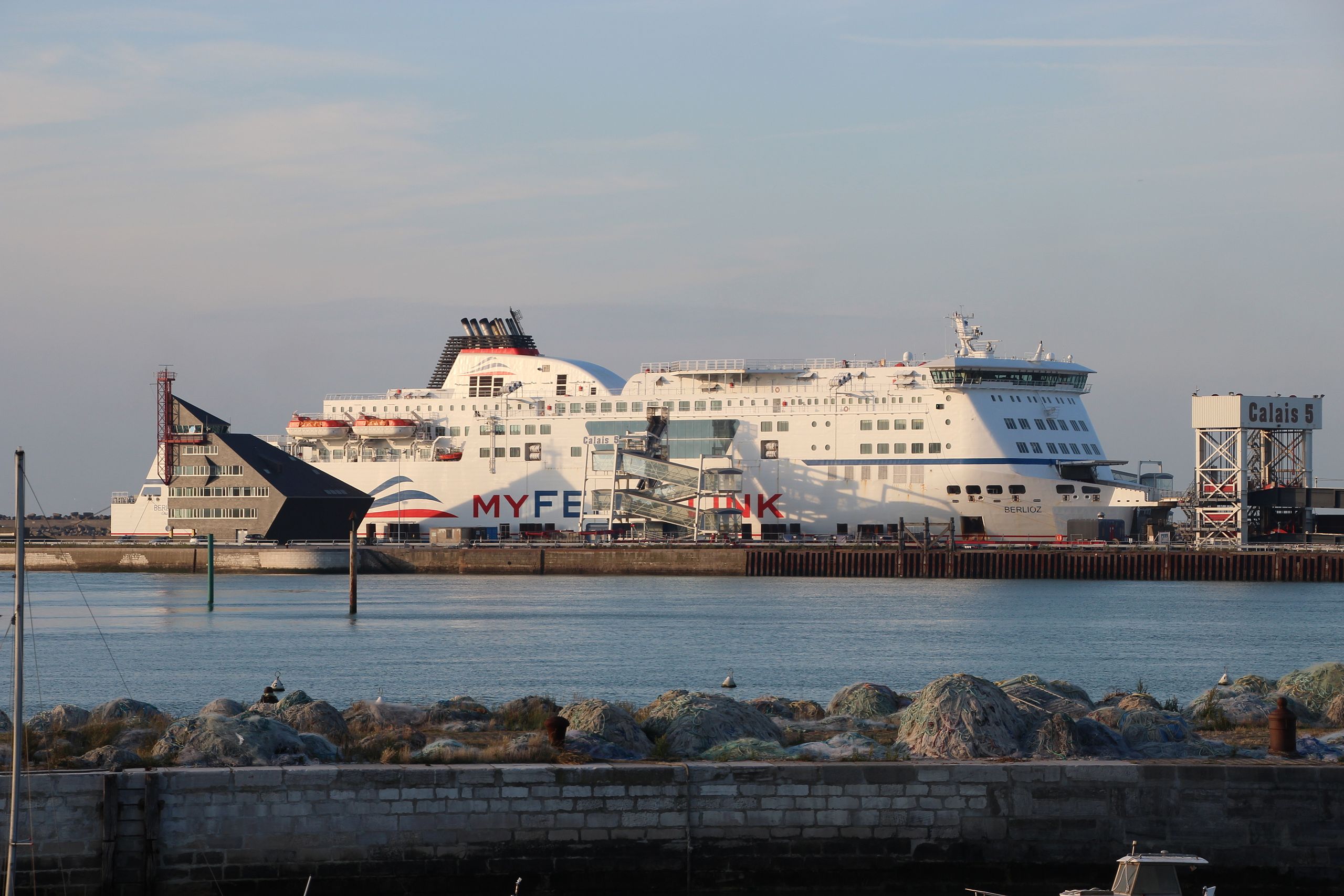 Officially opened on October 31st, the new port terminal was supposed to speed up boarding processes. Indeed, a press release issued by the port estimated that the new complex would result in a 30% cut in stopover time:

“The extension of the Port of Calais has 3 new ferry stations capable of accommodating new generation super ferries. The floating gangways that equip them allow passenger vehicles and heavy goods vehicles to be loaded / unloaded on four tracks simultaneously against two currently, which allows a time saving of 30% per stopover.”

Other features of the new complex are a seawall more than 3 kilometres long, a 170-hectare basin (90 hectares of which are navigable in the first phase), 65 hectares of platforms and roads, three new ferry berths (plus 39 buildings necessary for the operation and secure reception of port customers), new quayage which will provide the space required for the efficient integration of intermodal rail-road-sea infrastructure (Rail and Sea Motorways);  and development of new cross-Channel traffic reception capacities including parking facilities, roads as well as roughly twenty operational and reception buildings. 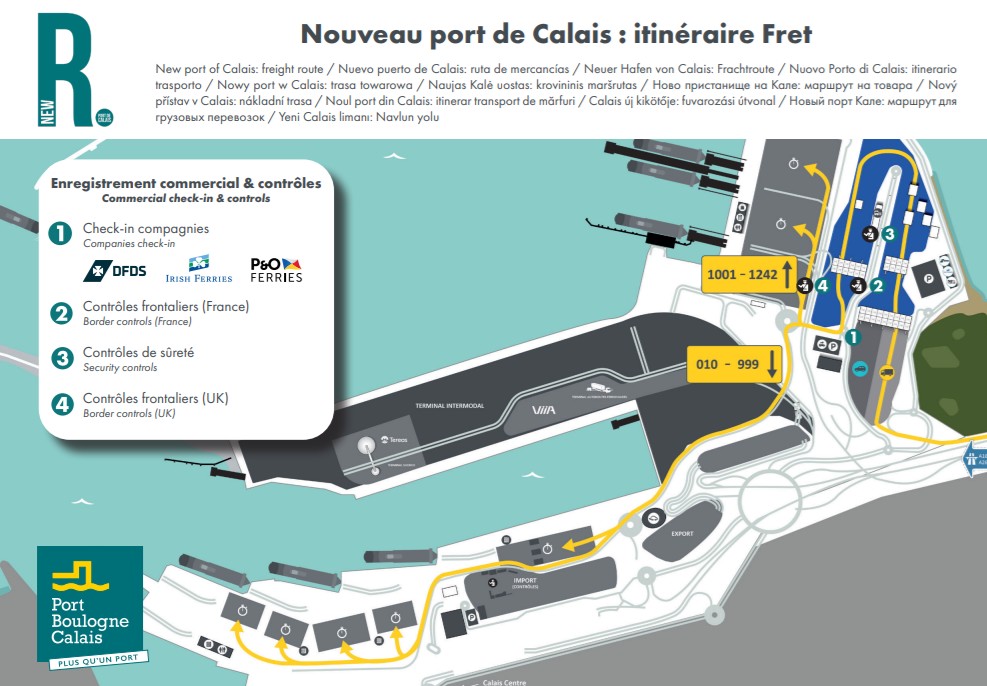 The new facility officially opened just under a fortnight ago with an accompanying ceremony, as shown in the photos embedded in the following tweet:

Nevertheless, in the days since then, the port appears to have attracted a fair amount of criticism from the lorry drivers who have gone through it.

In reply to the above tweet, a Polish trucker wrote: “It is a misconception to build a new port and to make half as many checkpoints as there should be. The check in time is even longer than in the old port. I do not recommend it.”

In the same thread, an English-speaking lorry driver added: “How about getting some sort of security to say which lane goes next… at the custom huts 6 lanes through 2 doors total chaos… been waiting over 1 hour already.” Meanwhile, over on the port’s Facebook page, a user replied to a post about the facility by saying: “Appalling work. Badly managed and absolutely unfit for purpose.”

Lorry driver Baz Scott also posted the following observation about the port on the European Road Haulage Group on Facebook:

“The new Port at Calais appears to have been designed by the same geniuses that design British motorway services. No thought whatsoever has been given to the possibility of queues forming between the different checkpoints, so traffic backs up across the exits of the check in booths, French passport booths, examination sheds.. then the two lanes to the UKBF only appears to be used as a single lane by most drivers.”

Another of those caught up in the disruption at the new port last week was Pete White, boss of Whites Transport Services. At the time, Mr White posted on Twitter that the situation was “a shambles”.

So slow at getting trucks through Calais. so many trucks have missed the boat. Almost 5hrs for next one. Like mine tacho I expect everyone else’s is messed up. What a shambles. @calaisport @dfds_uk @POFerriesFR8 pic.twitter.com/Ft3sxw1Slj

White then explained to Trans.INFO how the unexpectedly long delays at the port had eaten up most of his drivers’ hours, forcing him to find the closest legal parking space. Then, in a scenario that will unfortunately be familiar to many drivers driving in and out of Kent, the trucker and haulage boss found himself driving an hour to park in a layby due to all of the lorry parks being full. Luckily, he just managed to do so while being within his hours.

Keen to learn if Whites Transport Services had also observed issues with the new port design, we asked Mr White what his thoughts were about the facility. He told Trans.INFO that he fears the delays at the port could get worse, and that he will even be boycotting Calais until the issues are remedied:

“It was a quiet night – I can’t imagine how terrible it will be on a really busy day. Just to get three trucks that are in one road to go through one shed takes 20-30 minutes. They should have 6 sheds running and only go down to using 2 of them when it’s very quiet. So despite the millions of euros that they have spent on the port, I would much rather go back through Calais how it was. I will never go through Calais again until they sort these problems out. I’ve spoken to all of my drivers today, and they’ve all said to me not to bring them back through Calais. We’ll boycott Calais and go back on the train or through Dunkirk. We do not want to come back through Calais, and we do hundreds of crossings every month.”

On the specifics of the design, Mr White said:

“It’s just an awful design. It would be okay if they could process the trucks a lot quicker. When I was speaking to the guy that does heartbeat control, I told him that the new system was terrible, and he just looked at me and shrugged his shoulders. Also, I noticed that one of the ferry operators was tweeting to say that they knew there were problems and that they were going to hold the ferry back a little bit longer to wait for vehicles struggling to get through, to make sure they catch the boat that they’re meant to be on. But literally just 15-20 minutes and the boat was gone – I couldn’t believe it. The ferry must have gone with virtually no freight on it whatsoever.”

Moreover, the European haulage boss is concerned that the current system could see one issue causing a worrying domino effect:

“It’s all linked and the shutters go up and down together, so I imagine if they found an issue with one vehicle, it would just stop the whole program from continuing. Even the lane next to it would have to hold until they sort that issue out.”

“Check in to French passport is 100 metres; from there to the Heartbeat sheds it’s another 200 metres and from there to UK passport it’s 1 km. Whoever thought this out is an idiot. The sheds back up so much it goes past check in and out to the motorway.”

Commenting on the disruption seen at the port last week,  Jean-Marc Puissesseau, CEO of the Port of Calais, told local newspaper La Voix du Nord that “it is obvious that the new procedures are not done quickly.” However, in his opinion, “everyone has to adapt, then the port will work perfectly well.”

Mr Puissesseau then went on to add:

“When the traffic is heavy, the trucks are used to lining up in a single line. Those who want to check in with DFDS or Irish Ferries can double up and head to the dedicated booth but they don’t know it .”

According to La Voix du Nord, the problems that emerged last week even prompted an extraordinary meeting between trade unionists, the labour inspectorate, as well as the management of P&O and the port. Interim measures have reportedly been proposed, such as “the implementation of the physical management of vehicle flow.”

Another issue raised by the local paper concerns the safety of staff at the port.

La Voix du Nord writes that when traffic jams form, the door of one of the port buildings is blocked by trucks. According to an anonymous source who works at the port, the blocked door is the only way of entry and exit, meaning employees would be stuck in the event of a fire. The newspaper adds that the CEO of the Port Operating Company was not aware of the problem, because the company itself was not responsible for the job of constructing the extension.

A recent report from the Paris Region Institute unsurprisingly concluded that Calais-Dover will remain the dominant cross-Channel route for the foreseeable future. The paper based its conclusions on the port’s geographical advantage, intermodal links as well as its recent investments.

However, as Pete White explained to Trans.INFO, Dunkirk remains an attractive and even preferred option for many hauliers.

Among the advantages of using Dunkirk, according to Whites Transport Services, are an easy approach for HGV vehicles, less possibility of migrant incidents, a shorter travel distance when coming from Belgium or Germany, and the opportunity for drivers to rest a little longer while on the ferry. The whole trip takes roughly an hour longer than Calais including boarding, but the route is seen as being more reliable and an overall better experience.

The Port of Calais has been contacted by Trans.INFO for comment regarding the aforementioned criticism from drivers and hauliers. In recent days, the port has repeatedly tweeted that the flow of the traffic through the facility has been fluid. Today’s update from P&O stated that queues on approach were clear, with queues for check in medium and border control queues minor.